The Release Notes include information concerning the release of a new Magic: The Gathering set, as well as a collection of clarifications and rulings involving that set's cards. They're intended to make playing with the new cards more fun by clearing up the common misconceptions and confusion inevitably caused by new mechanics and interactions. As future sets are released, updates to the Magic rules may cause some of this information to become outdated. Go to Magic.Wizards.com/Rules to find the most up-to-date rules.

Go to Magic.Wizards.com/Formats for a complete list of formats and their permitted card sets and banned lists.

Go to Magic.Wizards.com/Commander for more information on the Commander variant.

Go to Locator.Wizards.com to find an event or store near you. 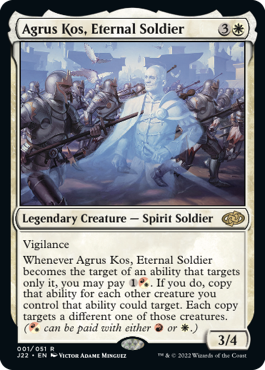 Agrus Kos, Eternal Soldier
{3}{W}
Legendary Creature — Spirit Soldier
3/4
Vigilance
Whenever Agrus Kos, Eternal Soldier becomes the target of an ability that targets only it, you may pay {1}{R/W}. If you do, copy that ability for each other creature you control that ability could target. Each copy targets a different one of those creatures. ({R/W} can be paid with either {R} or {W}.) 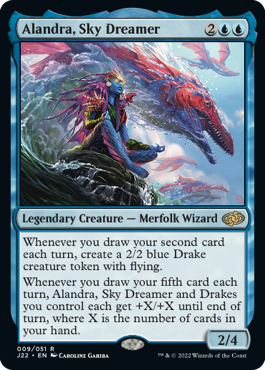 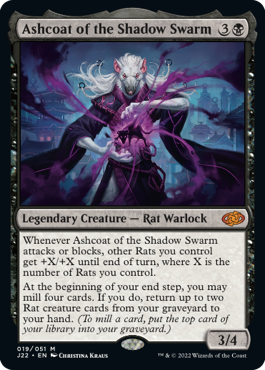 Ashcoat of the Shadow Swarm
{3}{B}
Legendary Creature — Rat Warlock
3/4
Whenever Ashcoat of the Shadow Swarm attacks or blocks, other Rats you control get +X/+X until end of turn, where X is the number of Rats you control.
At the beginning of your end step, you may mill four cards. If you do, return up to two Rat creature cards from your graveyard to your hand. (To mill a card, put the top card of your library into your graveyard.) 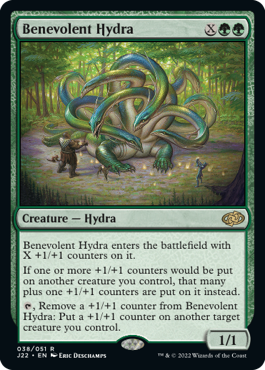 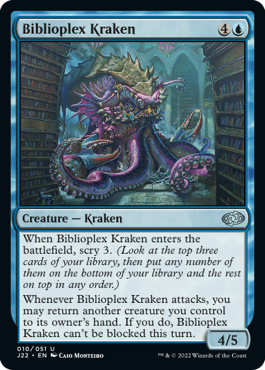 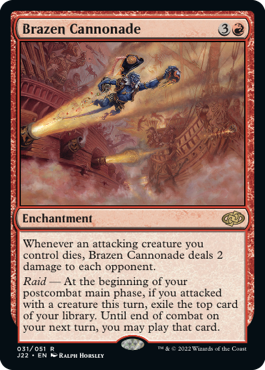 Brazen Cannonade
{3}{R}
Enchantment
Whenever an attacking creature you control dies, Brazen Cannonade deals 2 damage to each opponent.
Raid — At the beginning of your postcombat main phase, if you attacked with a creature this turn, exile the top card of your library. Until end of combat on your next turn, you may play that card. 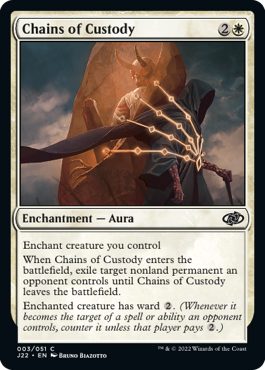 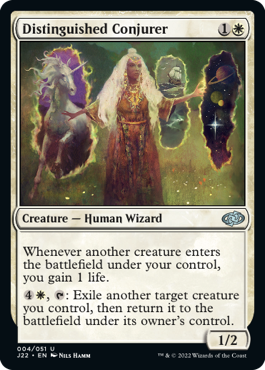 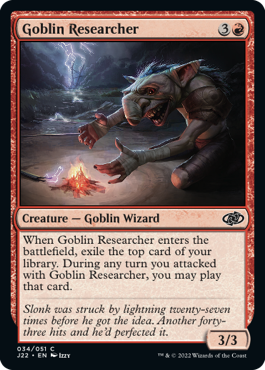 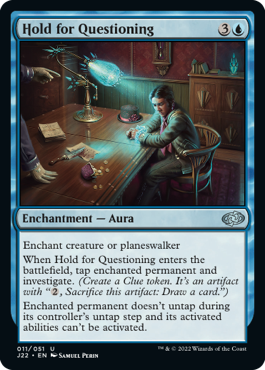 Hold for Questioning
{3}{U}
Enchantment — Aura
Enchant creature or planeswalker
When Hold for Questioning enters the battlefield, tap enchanted permanent and investigate. (Create a Clue token. It's an artifact with "{2}, Sacrifice this artifact: Draw a card.")
Enchanted permanent doesn't untap during its controller's untap step and its activated abilities can't be activated. 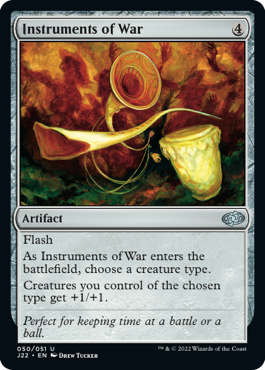 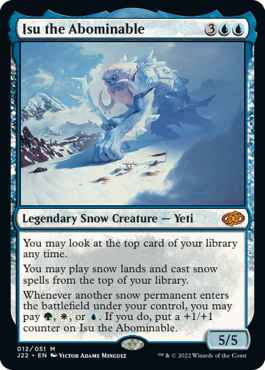 Isu the Abominable
{3}{U}{U}
Legendary Snow Creature — Yeti
5/5
You may look at the top card of your library any time.
You may play snow lands and cast snow spells from the top of your library.
Whenever another snow permanent enters the battlefield under your control, you may pay {G}, {W}, or {U}. If you do, put a +1/+1 counter on Isu the Abominable. 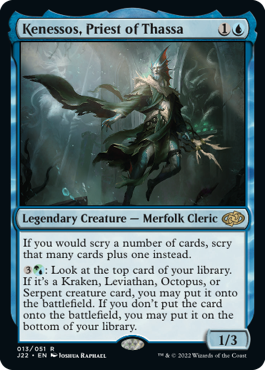 Kenessos, Priest of Thassa
{1}{U}
Legendary Creature — Merfolk Cleric
1/3
If you would scry a number of cards, scry that many cards plus one instead.
{3}{G/U}: Look at the top card of your library. If it's a Kraken, Leviathan, Octopus, or Serpent creature card, you may put it onto the battlefield. If you don't put the card onto the battlefield, you may put it on the bottom of your library. 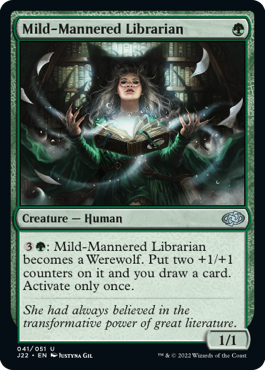 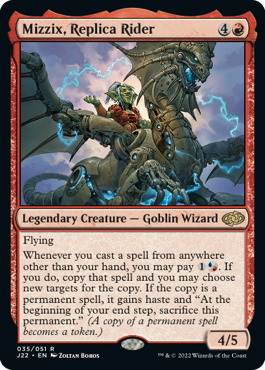 Mizzix, Replica Rider
{4}{R}
Legendary Creature — Goblin Wizard
4/5
Flying
Whenever you cast a spell from anywhere other than your hand, you may pay {1}{U/R}. If you do, copy that spell and you may choose new targets for the copy. If the copy is a permanent spell, it gains haste and "At the beginning of your end step, sacrifice this permanent." (A copy of a permanent spell becomes a token.) 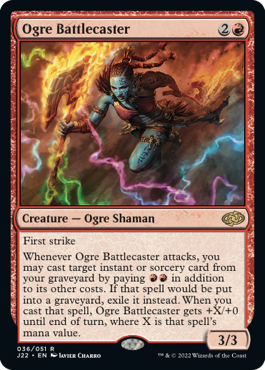 Ogre Battlecaster
{2}{R}
Creature — Ogre Shaman
3/3
First strike
Whenever Ogre Battlecaster attacks, you may cast target instant or sorcery card from your graveyard by paying {R}{R} in addition to its other costs. If that spell would be put into a graveyard, exile it instead. When you cast that spell, Ogre Battlecaster gets +X/+0 until end of turn, where X is that spell's mana value. 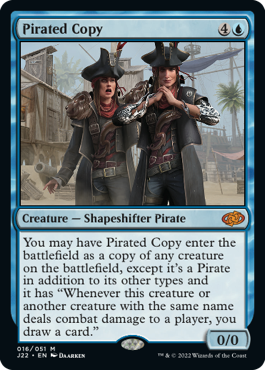 Pirated Copy
{4}{U}
Creature — Shapeshifter Pirate
0/0
You may have Pirated Copy enter the battlefield as a copy of any creature on the battlefield, except it's a Pirate in addition to its other types and it has "Whenever this creature or another creature with the same name deals combat damage to a player, you draw a card." 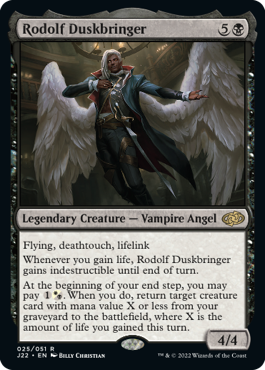 Rodolf Duskbringer
{5}{B}
Legendary Creature — Vampire Angel
4/4
Flying, deathtouch, lifelink
Whenever you gain life, Rodolf Duskbringer gains indestructible until end of turn.
At the beginning of your end step, you may pay {1}{W/B}. When you do, return target creature card with mana value X or less from your graveyard to the battlefield, where X is the amount of life you gained this turn. 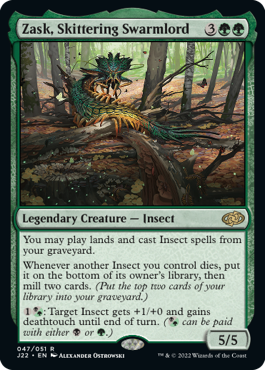 Zask, Skittering Swarmlord
{3}{G}{G}
Legendary Creature — Insect
5/5
You may play lands and cast Insect spells from your graveyard.
Whenever another Insect you control dies, put it on the bottom of its owner's library, then mill two cards. (Put the top two cards of your library into your graveyard.)
{1}{B/G}: Target Insect gets +1/+0 and gains deathtouch until end of turn. ({B/G} can be paid with either {B} or {G}.)