'm a Commander player. I shuffle more cards and play more games with hundred-card decks than with any other format. I've never been a competitive player. I love to sit down with a handful of friends, pull out our Commander decks, and flip over the commanders. For me, those games aren't about winning (although I do hate losing); they are rather more about the shared joy in the awesome things Commander decks can do. 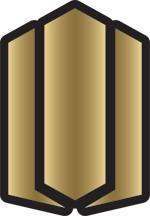 Commander is a casual format. It consists of hundred-card decks that can only use one of any card other than basic lands. The format is a fan creation and is still managed by a Rules Committee outside of Wizards of the Coast. You can learn more about this format over at MTGCommander.net or by looking through the Serious Fun archives.

For many Commander players, a new product's release represents an important event. For sets with new and exciting cards it is a time largely to get access to those, such as with Return to Ravnica. For our other products, like the From the Vault series or the upcoming Commander's Arsenal, the excitement is for what we might already have but get in a new form.

So there I was, sitting in the coverage area for the Pro Tour, and while I listened and watched coverage my eyes kept straying to my to-do list item: 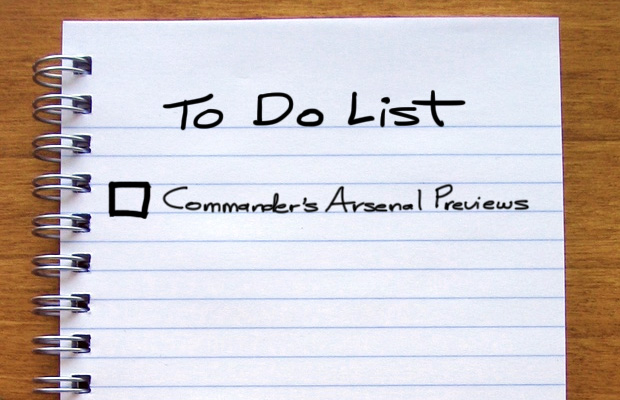 Not bad as far as things to do go, especially while watching the best Magic players in the world sling spells.

We haven't said a lot about Commander's Arsenal, but with the release looming in the near future, it's time to pull back the curtain and reveal some of its treasures. 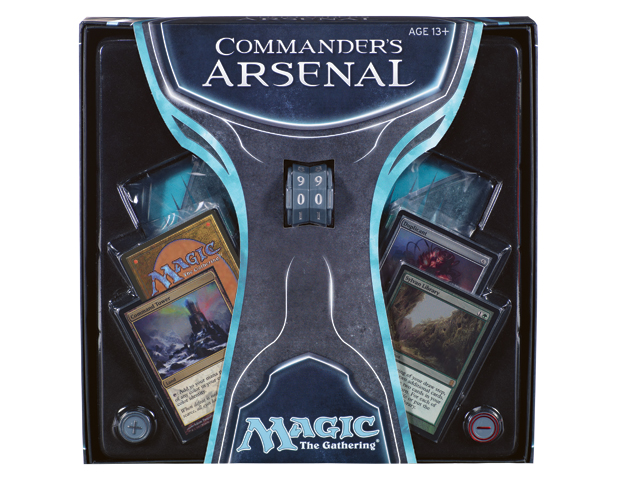 Check out the rest of the goodies that come with the Commander’s Arsenal.

As we've said, after the great reception for the Commander decks last year, Wizards of the Coast plans to support the format with regular releases. We didn't have enough time to create another set of decks for this year, so instead we have this arsenal of weapons.

Rather than giving you all the cards today, we're going to dole them out in batches, some today (obviously), some tomorrow over at MTGCommander.net, and then the full release Thursday (here again). Hope you're ready! 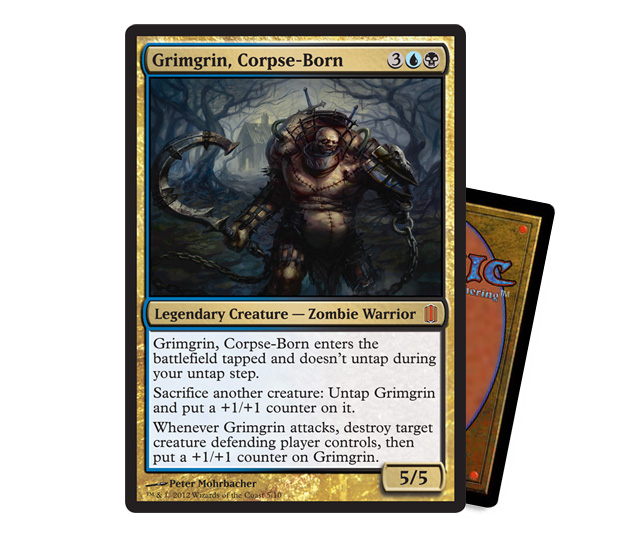 I have a special love for Grimgrin. I was able to preview him for Innistrad and actually shot the video while covering Pro Tour Philadelphia, a fateful event where I would hear word of an open content manager position at Wizards.

Grimgrin, Corpse-Born is a very aggressive commander. He usually is in a Zombie tribal deck using graveyard tricks to abuse his ability. From within Innistrad itself, you got the very powerful combo of Rooftop Storm and Gravecrawler, making your Grimgrin infinitely large and infinitely terrifying. But beyond that, blue-black is a very powerful color pair in Commander, as it provides you access to almost all of the most broken and degenerate cards in the format. 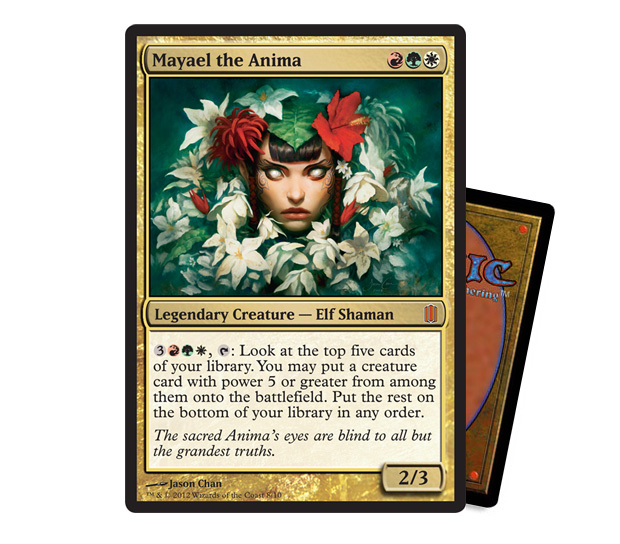 While I wasn't able to preview her, Mayael is one of my favorite commanders. I love nothing more than throwing the figurative dice and seeing what big creature sits in my deck's top five cards. My deck uses lots of acceleration to get to Mayael's six mana for activation, usually reaching it on turn four and then just continuing to put fatties on the board.

My top three favorite creatures to flip from Mayael: 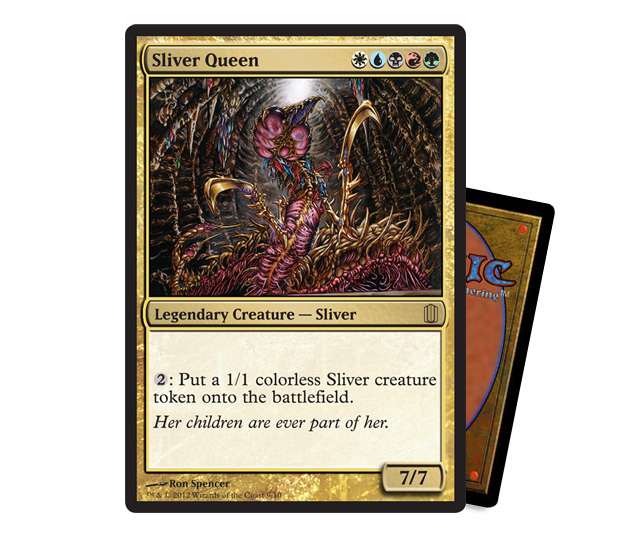 The truth is that I don't have a five-color Commander deck. Never built one. I think, though, that when I do, it will be Sliver Queen. Slivers in Commander can be quite powerful if you have access to all of them, and of the options for your Sliver commander, Sliver Queen is as good as it gets. I don't know why I've never built a Sliver deck; there's really no reason, I just haven't gotten around to doing it.

Now, onto the normal-sized cards, and oh boy are they pretty awesome. 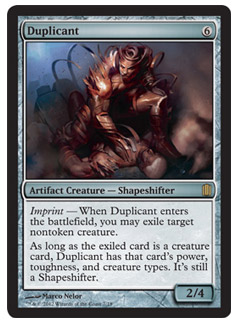 What needs to be said about Duplicant other than it is a Commander staple, able to remove troublesome creatures and be a beater of your own? I have to admit that when I was a novice Commander player, I took a while to catch on to Duplicant. Six mana seemed like a lot. It wasn't on theme with my Kiki-Jiki, Mirror Breaker tribal deck and I couldn't see it fitting in my Uril, the Miststalker deck. Oh how little I knew! He's insane in my Kiki-Jiki, Mirror Breaker deck, allowing the Goblin to copy him and create all sorts of hijinks, and while not an enchantment to buff Uril, he definitely found a home and purpose in that deck as well. 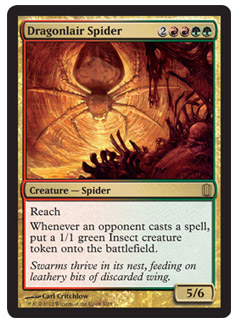 One of the awesome things about this set of cards is that it is going to be the first time a handful of cards are printed as premium foils, such as this one! Dragonlair Spider was originally printed as one of the new cards in this year's Planechase (2012 Edition), which means it was never released as a premium. To rectify that... here it is!

I love the flavor of this card—despite being red and green, there is something inherently creepy about it: The more you struggle as you face the spider, the more little spiders come out. I haven't done it yet but once we get a Spider lord I can't wait to make a Spider Commander deck. Maybe I'll call it "Eye Spy-der." 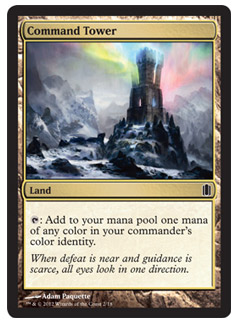 Based on the revealed art, this should surprise almost no one, but here is another awesome premium foil. Technically not the first premium version for this card, since there was a promo for our judge community, this will be the first packaged version. It also features the fantastic new artwork, of course.

What is there to say about Command Tower except that it is a fantastic inclusion for every Commander deck? I like to joke about including a copy of Command Tower in my mono-red Kiki-Jiki, Mirror Breaker deck, but the truth is that doing something like that actually just makes you more susceptible to nonbasic land destruction. Plus, you can't fetch it.

Regardless, this premium version looks amazing and might be worth throwing in my Kiki-Jiki, Mirror Breaker deck just for the beautiful foil. 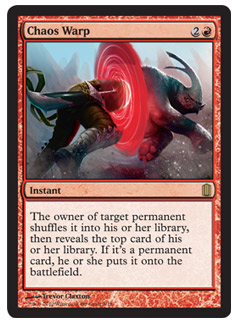 Chaos Warp comes from the first series of Commander decks and so was never released with a premium version. It's a great piece of removal—especially for red, which is normally just stuck with cards that deal damage. This allows us to not only avoid the whole "deal enough damage" for removal purposes, but also keeps the removed card from hitting the graveyard.

In Standard and other formats, the graveyard can often be a hindrance for players in terms of accessing cards. In Commander, that restriction is null and void—the graveyard is just another resource to be accessed with the multitude of available recursion spells. 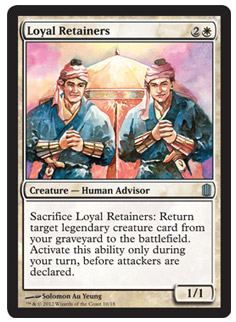 Say what!? Yep! Loyal Retainers, originally released in Portal Three Kingdoms, has become harder to find as the years passed since it was released. Its ability is quite powerful in that it does something not normally within white's slice of the color pie, and given the prominence of legendary creatures in Commander it can be part of some fun combos.

There you go! Eight cards (five normal sized, three oversized) from the upcoming Commander's Arsenal. Be sure to check MTGCommander.net on October 24 at midnight eastern to see the next batch of cards we're revealing from the set! And I'll be back on Thursday with the second part of my update.