ou might not have noticed and, well, that's actually kind of the point. There's been a puzzle hidden inside Return to Ravnica, Gatecrash, and Dragon's Maze. A puzzle not unlike the one Jace has been unraveling. But this puzzle lives in the flavor text of the Guildgates. 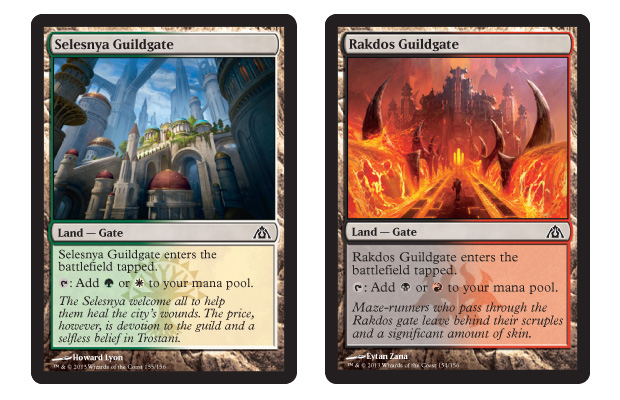 It's hard to see, but if you look closely at the flavor text you can make out that a few letters are minutely offset from the others. Check your own Guildgates. They're there. 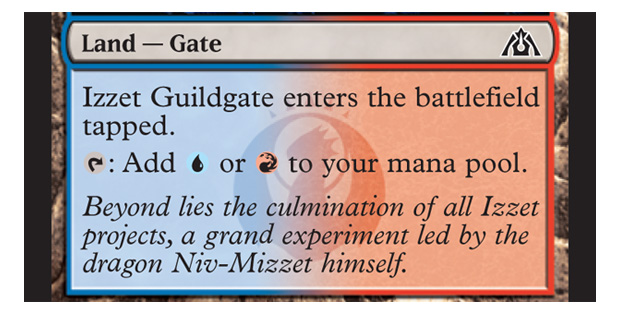 Is that a mistake? What are these letters? What do they mean? What is the secret message?

It's not a mistake. It's the fruit of labor from a number of people behind the scenes, but primarily from two: Doug Beyer and Matt Tabak.

Doug Beyer, of Savor the Flavor fame, and member of Magic's creative team, loves Ravnica. No, he really loves Ravnica. During the creation and worldbuilding for our return to Ravnica (aptly named, perhaps) he began coming up with the story that this visit was wrapped around. That story eventually became the three-part novella,The Secretist, which just released the third and final part. The Secretist is a story that revolves around Jace, who has uncovered an ancient and mysterious puzzle. Doug found himself drawn to the idea of hiding a puzzle inside of Ravnica. And that puzzle needed to revolve around the set's Guildgates.

Due to the way that Return to Ravnica and Gatecrash were developed in R&D, there was a large amount of overlap between them, such as for the cycles present in all guilds. One of these cycles is the Gates—common dual lands that help solve mana issues for players. An issue with a multicolor-themed block is that it can create issues with deck building as players try to support multiple colors.

Considering that the shocklands from our first trip to Ravnica became so iconic, it seems perhaps fitting that this visit might pay close attention to another facet of guild-centric mana production.

Doug had the seed of this idea: a hidden message tied to the Guildgates. But he realized that he needed help. He needed someone to help create the actual puzzle. Enter Magic rules manager and Return to Ravnica set editor Matt Tabak, who happens also to be an avid puzzler.

Avid puzzler may be too timid a phrase. He loves puzzles and Easter eggs.

After Doug explained the core of the idea, Matt went back and worked on it for few days. Return to Ravnica was in development and R&D already had the art and flavor text for the set. This idea was perhaps a bit late in the process. Matt looked at what there was and experimented with a handful of ideas before coming up with a rough method of encoding their hidden message in the Guildgates' flavor text through simple obfuscation. No encoding. No cipher.

The base of it is a four-column grid of letters, written vertically such that each Guildgate contained four independent letters for the message and no complete word. If you ordered the Guildgates in guild order you could see the message clearly.

With the method decided, the next step was to figure out how they would identify the important letters. The original plan was to just unitalicize the letters. Since all flavor text is in italics, this was the most obvious starting point. But, immediately, Doug and Matt realized that the charm of this adventure would be lost if it was too obvious. So they went to Steve Nashem, one of Wizards's graphic designers who works behind the scenes in the actual making of Magic.

As they worked through these variations they laid out the two rules the solution had to follow:

It had to be visible with the naked eye.

It couldn't just look like a mistake when glanced at.

They tried underlining the flavor text's letters but they felt it seemed like the lines were just printing errors. When they tried unitalicizing the letters they decided the weirdness of a suddenly non-italic letter was jarring. It was the subtly offset letter that they felt struck the right balance of non-obvious but also not easily mistakable as an error. 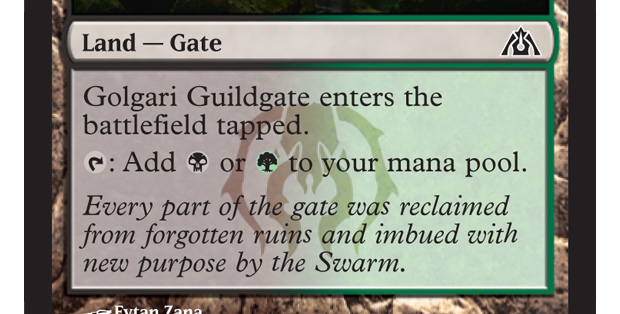 Doug, from his time on Savor the Flavor, is well aware of how amazing and dogged our fans are as detectives. With a hive mind and attention to detail, almost nothing slips under their radar. Over and over, Doug, Matt, and Steve decreased the pixels off the baseline until they reached a point where they felt it was still visible but not obvious. The reader's eye could easily slide across the letter when being read, but on the other hand, the letter was visibly offset when examined. That was the perfect distance.

Doug's initial idea was to just do it in English. Neither Matt nor Doug were even sure it could be translated and, if so, how much work would it end up adding. With those two questions they chose to keep the scope of this Easter egg rather limited. It was Magic's Senior Brand Manager, Mark Purvis, who was the driving force behind the puzzle being done for all eleven languages.

Cards from Return to Ravnica were already coming back from localization when they began working on implementing the hidden message internationally, so some of the teams were already off of Return to Ravnica and onto other projects. But the localization teams, rather than be disgruntled at this new work, were enamored with the challenge. It became a puzzle for them as well. How could they take this secret message and hide it in their own languages?

When implementing the secret message in English, Matt Tabak had suggested slight rewordings on flavor text to help facilitate the hidden message. The foreign localization teams did the same thing, finding how they could adjust the flavor text in subtle ways to provide the needed letters for the message.

Each person who touched the puzzle discovered a puzzle of his or her own. Something needed to be solved to make it happen.

Doing something cool is dangerous. If you do it, you want it to be noticed. How can it be cool without being seen? That's the whole impetus behind things like YouTube, blogs, and Twitter. Show the world this awesome thing. But... what if the coolness of what you do relies on it not being obvious? Is it worth doing?

Doug and Matt fully believed the community would suss it out with no hints. But there was some internal concern that maybe this was all too subtle or would simply be overlooked in all the excitement of players returning to the beloved plane of Ravnica. 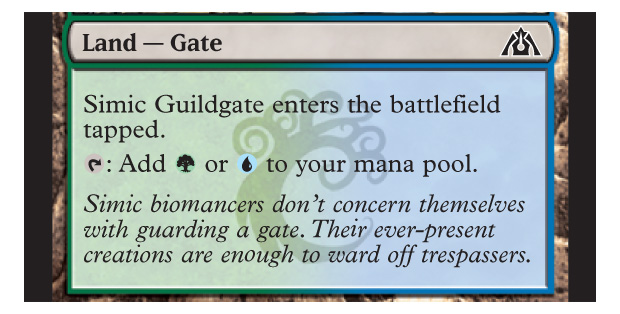 Once Doug and Matt were finished, the sets were done, and the cards were sent out for printing, the ownership of the puzzle sort of shifted to me. I had to figure out what we would say, if anything, and how we would deliver it.

Even inside the building discussion was low, as if we were afraid just speaking about it would let the secret out. I opted for almost no hinting. There were a few tiny ones, but nothing overt. We trusted in our players to find the message. And on January 4, 2013, when we revealed all of Gatecrash's Guildgates, the community spotted it.

Perhaps for Return to Ravnica, people noticed the letters but just thought they were mistakes. But as soon as we revealed all five of Gatecrash's Guildgates, they realized the "mistake" was actually purposeful. Or maybe it was seeing all five of them on the page at one time that made players spot the offset. Whichever it was, with a post on a Magic forum that got picked up on Reddit, the community not only rapidly uncovered the message in Gatecrash and Return to Ravnica but also discovered its existence in all languages.

Return to Ravnica and Gatecrash left fans with a very dire message: "THE GUILDS OF RAVNICA WILL DESTROY EACH OTHER." But now, with Dragon's Maze, you are able to get the final segment of the puzzle in the ten new Guildgates.

As opposed to the mass reveal of all five Guildgates in Gatecrash, for Dragon's Maze we dropped one a day into the Card Image Gallery, drawing out the process for those curious players at home eager to solve the puzzle.

If you haven't found the message in Dragon's Maze, here it is: 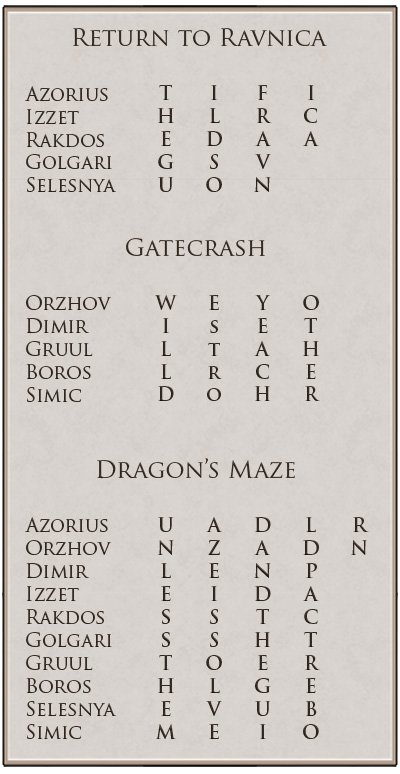 This whole thing is among the biggest non-card secrets I have been excited for the community to uncover. I love Easter eggs and hidden messages, and perhaps if you look carefully you might uncover some more secrets in Magic.