ello! My name is Dave Guskin, and I led the final design and development of the Magic 2014 Core Set. Since I walked in the door of Wizards of the Coast, I'd hoped I'd have the chance to lead a Magic set, and I finally got my shot with Magic 2014. Sure, the stars had to align a little bit for me, a digital designer at the time, to land a gig as a big-shot set lead, but I'm not complaining! The experience was more challenging — and more rewarding — than I ever expected, and I wanted to share the highlights of that experience with you.

The composition of this particular core set development team was pretty unique.

Dave Guskin (lead): That's me! As I said, my primary R&D role was as a digital designer. I worked on basically all of the digital initiatives we've had kicking around in our department over the past few years: Magic Online, Duels of the Planeswalkers, and an array of smaller digital projects as well.

When R&D Director Aaron Forsythe and my boss, Ken Troop, asked me into Aaron's office and laid out the opportunity to lead this core set, I couldn't say yes fast enough. Then, after I stopped bouncing off the walls and we had some more realistic discussion, we figured out how I would make the time and the project was begun. (I'd previously been on many design and development teams as a member — Alara Reborn, Magic 2011, New Phyrexia, Avacyn Restored, Planechase, Archenemy, and more!)

Aaron Forsythe: With me as the new lead, Aaron stepped in as my "strong second" to make sure the ship was steered in the right directions. Aaron was no stranger to development, having led Zendikar and New Phyrexia development during my time in R&D, and he has a plethora of designs under his belt, including both Magic 2010 and Magic 2011. I couldn't have asked for a better partner, although it took some work on both our parts to make sure he had the time in his schedule to contribute.

Max McCall: Max was a fellow digital team member, a smart lad with a very good grasp of Duels of the Planeswalkers in addition to the more casual-competitive mindset. Max was leading D14 at the same time I was leading M14, so we communicated frequently to ensure we were on the same page with a variety of problems in common to the two sets. (I'll talk more about this later.)

Kelly Digges: Kelly was a valuable addition to the team — he's got an excellent eye for detail and provided a valuable perspective on more casual play. I found that Kelly was great to bounce ideas off of, especially when we were looking to "fix" a problem related more to fun and less to numbers — particularly important and pernicious problems to solve!

James Hata: James works as a designer on Duel Masters and Kaijudo and did a great job applying the perspective of those games (more straightforward, splashier) to our job of making a core set really pop. James constantly caused me to challenge my assumptions about who a card was for or why it made sense that this solution was the right solution, and that dialogue really added to the dynamic of the team and the content of the set.

Two things you may notice as missing from my team — a core developer (meaning someone whose primary job it is to work on the balance, polish, and fun game play of a Magic expansion) and a design rep (meaning someone from the Magic 2014 design team). This made an already tricky problem — Dave in his first lead — into an even more complex one: how to combine the vision of an absent design team with the great game play of an absent development team, while keeping what was special about M14 at the forefront.

This is the story of a development team that lost everybody and the one man who had to keep it all together. This is Core Set Development.

In the beginning, M14 lead designer Mark Globus invited me into his office. Up until this point, I had only two things to work with — the Multiverse file containing the individual cards that design had made, and my predecessor Zac's notes to me when I took over from him as he moved off to work on Dragon's Maze. I pored through the file and read the comments, but there is a picture that the individual pieces, even when seen together, can't convey. That's why Mark and I began the "devign" handoff (the transition from design to development) with a series of meetings where we walked through the whole set and talked about how each piece interconnected and contributed to the vision.

What coalesced out of those conversations became the four central pillars of my Magic 2014 Core Set development.

With M14, Globus and his collaborators in creative and brand decided to take the "Lorwyn 5" Planeswalker line-up and put the spotlight on one particular character. Magic 2012 and Magic 2013 (and D12 and D13, respectively) had great success with the faces of Gideon and Nicol Bolas leading the set's design and marketing. After some deliberation, we agreed on Chandra, and Mark and I set out to make sure this would be the Chandra set. What would that entail? A new Planeswalker card aimed at making a splash in Constructed, many Chandra-themed support cards, and flavor throughout the set attached to her persona. 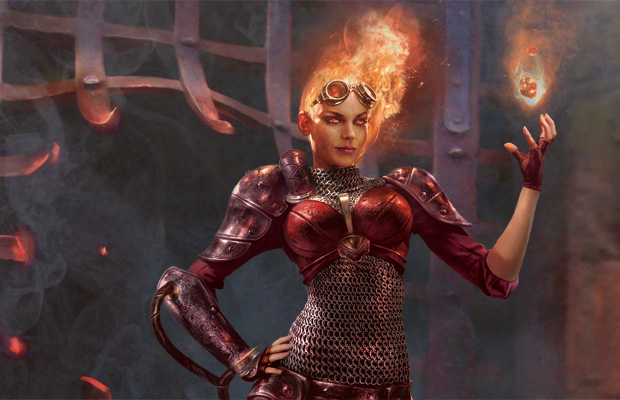 Let's turn the heat up a bit with.

We had quite a bit of debate over Chandra's 0 ability (which Erik Lauer lovingly refers to as "the Bottle ability," after old-school card Elkin Bottle), as to whether it was fair game for a red ability. In the end, I and many others were swayed by a combination of two arguments:

I'd like to share a special bonus preview with you, too — one of the ways in which we really blossomed from flame to bonfire with our Chandra support in this set. Take a look at Chandra' iconic gauntlet.

For the Johnny types among you (hello, my brethren!), there's some really fun stuff you can do with Chandra's Gauntlet in a tricksier burn-based control or combo deck. Might I recommend a first course of her Planeswalker card's +1, then a main course of Flames of the Firebrand or even a Grapeshot or a Staggershock? Serve grilled and spicy.

Mark Rosewater wrote an excellent article on Slivers in Magic 2014 today, so definitely check that out. I will say this about Slivers — they are by far the best at doing what Mark and I agreed was an important piece of the core set: give the player some deck to graduate to after basic "this is my color" deck building. Slivers are so straightforward and so rewarding to build as a new player, and then that deck opens the door to a more synergy-based approach to Magic. I was happy to work with them as our "returning" mechanic in M14. 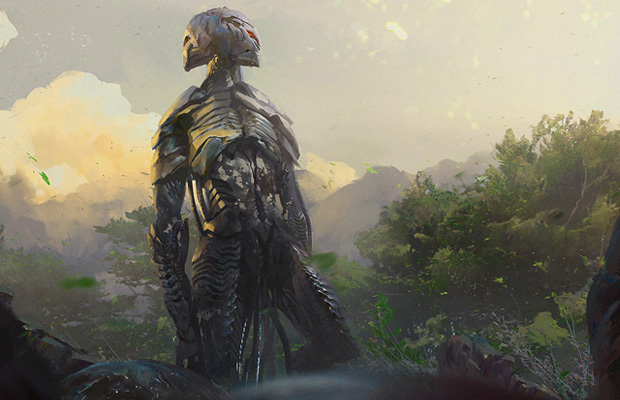 Slivers required a bit of work to iterate and playtest. Could we make a true five-color Sliver deck without breaking the other archetypes in core set Limited? Could the environment support more synergy-based decks rather than raw power? We couldn't load up on insane and intricate mechanics to flesh everything else out like Time Spiral. To solve these problems, I pushed to narrow the Slivers Limited archetype to RGW and diversified what each of the RG, RW, and GW Sliver decks looked like. Most important was spreading out the "build-around bonuses" — key abilities like first strike and haste in red, mana and power/toughness-boosting in green, and token generation in white. Once we worked that out, the deck archetypes started to click. Slivers are a fun draft strategy for the set, and deep enough that you can make a few different decks. (We kept a couple higher-rarity Slivers in blue and black to diversify Constructed.)

The design handoff had a strong cycle of mythic rare iconic creatures (Angel, Demon, Dragon, etc.) that each had its own vertical cycle of support cards at lower rarities. So, for example, the Sphinx had a Sphinx-tribal effect and there were Sphinxes at lower rarities. As we playtested and tweaked the set, we found some of the mythic rares were really fun and some felt off, and that keeping them as a tight cycle was over-constraining their coolness and fun factor. 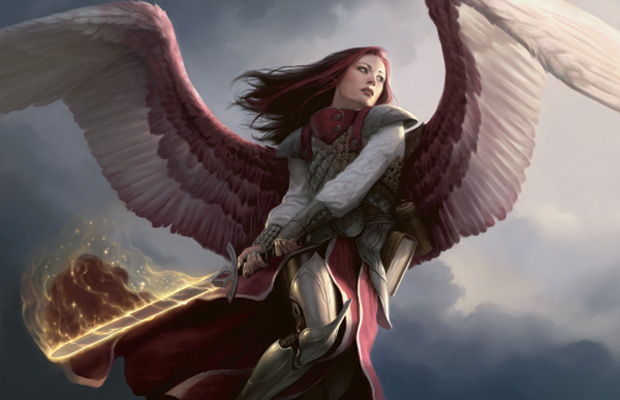 We kept support cards at lower rarities but reduced them to one per color. We also found the most fun version of each mythic rare, a pure expression of what that iconic was all about, and made sure there was a clear casual-Constructed path for a player to attach to and then make his or her own. This is one of my favorite parts of Mark's design, because it provides a playground of exploration for newer players to take small steps into the wider world of Constructed.

Magic 2014 is the fifth in a line of more resonant core sets. In your fifth installment, it can be hard to come close to the Magic captured by the first few iterations. To combat this, Mark, the creative team, and I agreed there was a fertile space for some combination tropes — cards that were neat resonant fantasy on their own, but created a mini-story when seen together. M14 is chock full of these tropes — Beast and Beast-Tamer, Witch/Cauldron/Newt, and my personal favorite Cultist and Summoned Demon. It gives a slightly different character to this core set that separates it from its predecessors in a consistent way — an evolution, rather than a complete reworking. 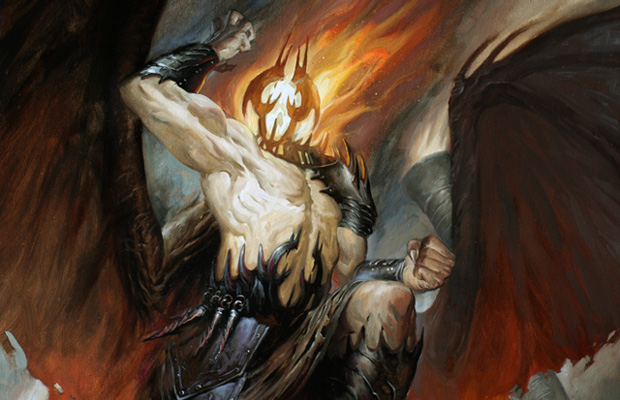 One thing to remember about a Core Set is how many reprints it has — anywhere between 100 and 150! That means the feel of the set has to align with our choice of reprints. My team did an excellent job identifying appropriate reprints where we could (supporting Slivers, filling out the promise of the lineages or of combination tropes, etc.) and of finding interesting diverse game-play cards elsewhere.

This connected strongly to Duels of the Planeswalkers — in Duels, the player experiences cards in a specific sequence (a series of planes) and we want to do our best to provide creative context from the partnered core set. So, M14 needed to respond to which planes D14 needed, and our concepters in creative worked hard to ensure our vanillas/French vanillas/workhorse reprints worked in those environments, too.

There's some other cool stuff I'd like to share with you about my first experience as a core set lead, but this article is already running long, so we'll do a simple list. I am very proud that even as a new lead, I got to try out some new things that have gone on to become more a part of the standard for running Magic set designs!

Development now has (at least) one dedicated draft day during set polish, which gives me a warm fuzzy feeling. Despite my rookie status, I feel like I contributed positively to the development team at the helm of the good ship M14!

(Ok, maybe that one was too obvious.)

I hope this walk through the development of Magic 2014 was interesting! More than anything, I learned that everything flows from considering your audience. Core sets have many masters, and it was both challenging and exhilarating to get my 229 cards to speak to each of them.

Have fun with the product my team and I created, and I hope you find something in there that speaks to you too!