reetings Magic Online players! It has been a couple months since my last update, and with a lot of exciting features and programs in the works, I wanted to share some of what Magic Online has coming in the next few months. It is a packed schedule and I have a lot to go over, so let's get started. 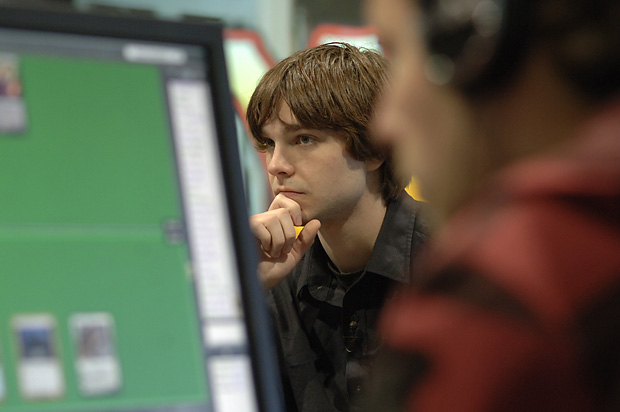 Here is a full list of finalists and how they qualified.

With the separation of the Magic Online Championship from a paper event, we know that some players were disappointed that qualifying for the MOCS Championship did not include an invitation to a Pro Tour event. We have decided that the best Magic Online players should have a chance to test their skills against the world's best paper players, so we have decided to invite all sixteen 2012 Magic Online Championship finalists to compete at Pro Tour Dragon's Maze in San Diego on May 17–19 or Pro Tour “Friends” in Dublin on October 11–13. Players will be contacted for their choice. Good luck, finalists!

Going forward, all future Magic Online Championship finalists will receive an invitation to a Magic Pro Tour based on the qualifier season in which MOCS Season Finals was held. For instance, the 2013 MOCS Season 1 and 2 Finals occurred during the Pro Tour Dragon's Maze qualifier season, so the winners will receive invitations to Pro Tour Dragon's Maze. A full breakdown for which Pro Tours the 2013 MOCS qualifiers will be invited to can be found below.

Please note that these invitations do not include travel, accommodations, or an invitation to the Pro Tour Challenges.

Magic Grand Prix events have become incredibly popular over the last few years. As the biggest open events around, hundreds of Magic players compete for prizes and glory in these multi-day tournaments. Traditionally, in the weeks prior to a Grand Prix, a series of Grand Prix Trials give players a chance to earn byes) that will give them a leg up on the competition.

With Grand Prix excitement at an all-time high, this is a great time to explore Grand Prix Trials on Magic Online.

Please note that travel and accommodations are not included as part of a Magic Online Grand Prix Trial. Byes are non-transferrable and will not be passed down if the Grand Prix Trial winner is unable to attend Grand Prix Portland.

As Magic continues to grow, we are constantly looking for additional ways to engage our audience and provide ways that we can integrate the paper and online experiences. We are pleased to announce that on March 13 we will be launching the Magic Online Promotional Code program. This program will provide new ways to unite paper and digital Magic experiences and give us another way we can reward our player for a variety of different brand interactions.

While we will be rolling out the Promotional Code program slowly; eventually, we will be able to offer our players many different ways to earn promo codes for digital objects in Magic Online, whether by purchasing specific products, attending events and conventions, or even just interacting with us through social media.

Players will be able to redeem any promo codes they have earned by going to the Magic Online Store, entering the code in the Promo Code field, and clicking Submit. Please note, however, that the promo code entry will only be available in the Wide Beta version of Magic Online, which you can download now. 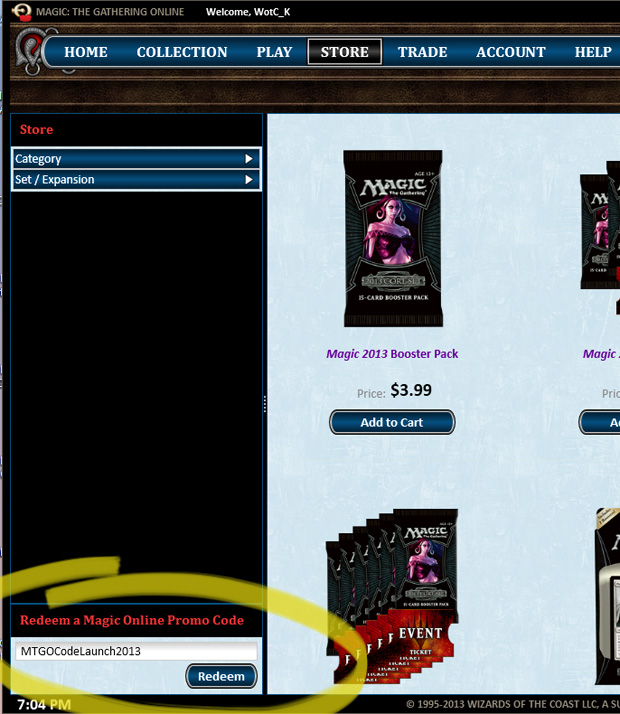 In celebration of our launch, here is a code for the Thursday Night Magic Online Promo version of Avacyn's Pilgrim: MTGOCodeLaunch 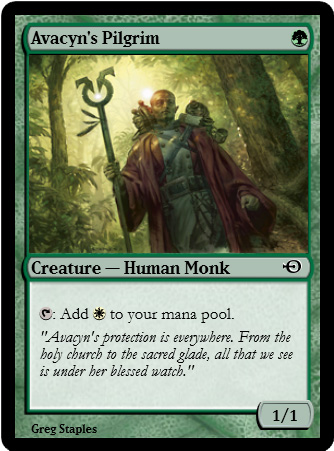 Each eligible Magic Online account can redeem this promo code once starting after our March 13 downtime is over, but don't wait. This promotion expires on March 20, 2013, at 7:00 a.m. PT. Full terms and eligibility requirements of this promotion can be found below.

Also note that our March 13 downtime includes some infrastructure upgrades and will have a special schedule, which can be found here.

The Magic Online Wide Beta is progressing nicely and we are getting lots of great feedback. We will be deploying our next major update on March 13, which includes additional improvements to the battlefield, fixes to collection, and the ability to save and load Limited decks during events. Make sure you check out Ryan Spain's Wide Beta feature next week for the full details. 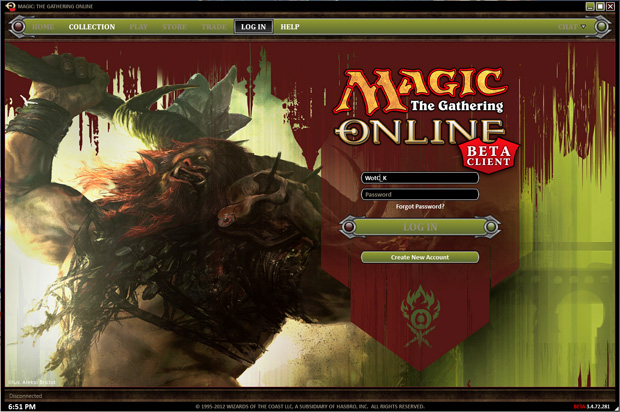 At the end of 2012, we began exploring what effects raising the current trade limit might have on the general health of the Magic Online ecosystem. After reviewing the risks, we have decided to raise the trade limit in a single trade transaction from 75 items to 400 items.

As with all of our changes that potentially have a high system impact, this change will be made on a trial basis so we can monitor the effect in Magic Online. We plan on deploying the update on March 27, but watch the Magic Online Group Blog for the latest updates.

Wrapping It All Up

2013 is shaping up to be one of the busiest years ever in Magic Online, and we are thrilled with the progress we are making. Stay on the lookout for more updates as we finalize more of our plans. Thanks for your continued support. Good luck and happy gaming.

Redemption Code Promotion Terms
Offer is good for a license to use one digital promotional version of the Avacyn’s Pilgrim card from Innistrad. Offer expires at 7:00 a.m. PT on March 20, 2013. Offer is not valid for cash or cash equivalent. Offer is valid for redemption by account holders whose billing address is located in the United States only. Only accounts in good standing may take part in this offer, and each such account may redeem the code only one time. Offer is non-transferable and use of the code in unauthorized advertising, marketing, sweepstakes, or for other promotional purposes is strictly prohibited.