have one thing to say about these Duel Decks: they're a lot of fun. I know this conclusively because my opponents and I all had a fantastic time as I lost over and over, no matter which of the decks I played. I don't know why; I can't explain it—but I did. I lost every single game I played with Sorin and with Tibalt.

The first Duel Decks of the year are in an interesting spot, as they are our last look at Magic's previous block, specifically looking through the lens of two of its Planeswalkers (first Venser vs. Koth and now Sorin vs. Tibalt), the second Duel Decks of the year look at the current block through the lens of two groups from the plane (Izzet vs. Golgari and this fall's unannounced decks.) 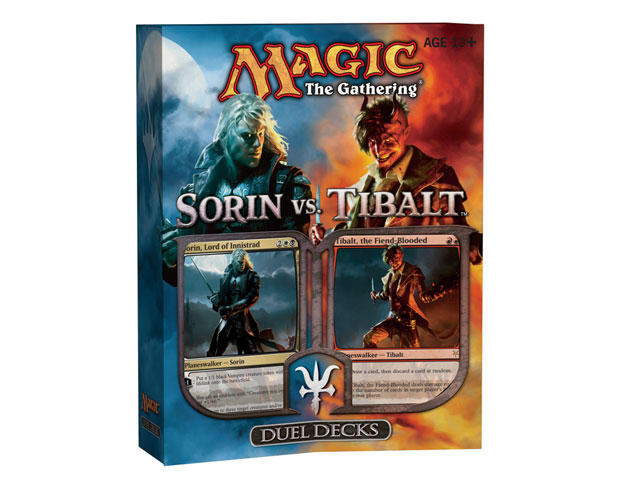 So, with Duel Decks: Sorin vs. Tibalt, we're reminded of two characters. The first, the powerful vampire Planeswalker who helped fight the Eldrazi on Zendikar and returned to his home plane of Innistrad to discover that the balance he strove for had been shattered and the humans were quickly becoming overrun by the forces of evil. One of those forces of evil, although not a key player in Innistrad's troubles, was Tibalt. Tibalt is, to me, evil incarnate. He's a pain-mage only interested in hurting others—exceeding even his desire to kill them. 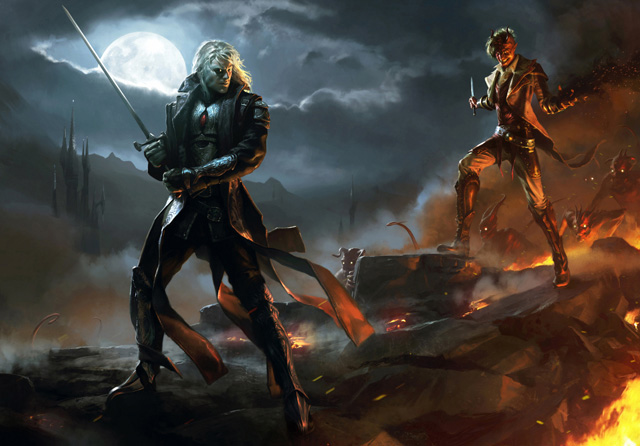 These two characters are beautifully depicted in their respective Duel Decks, as we revealed last week. But I mean more than just as their card representations. If you see the two decks as representing their namesakes, the play style, the cards, and the feelings these decks evoke mirror these two Planeswalkers fantastically. 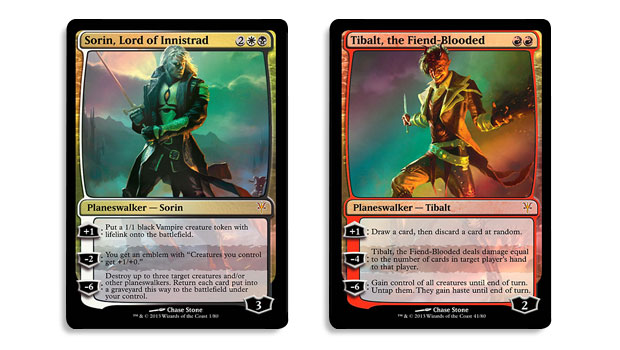 The first person I sat down to play against was the lead designer of the decks and former DailyMTG.com editor-in-chief, Kelly Digges. In fact, when I mentioned I was working on this article, Kelly insisted we go back up to my desk so he could see the decks in person. This was his first lead designer role since joining R&D.

As we played, I made sure to pick his brain about the decks and what went into designing them. Although he was the lead, he got the initial lists from Chris Millar, who is someone R&D works with as a contractor. After having the deck concepts explained to him, Chris concepted the first draft of these two decks. Kelly then brought them to R&D and worked on refining the decks, both as playable decks but also to fall in line with creative's vision of how these decks should work. And, in fact, creative gets credit for perhaps my favorite inclusion in these decks: Browbeat. 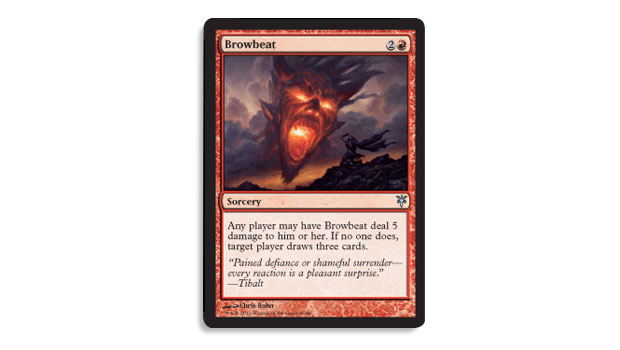 Which leads us to one of the other benefits that Kelly enjoyed as lead designer on the decks: picking which cards get new art. Now, he didn't have free rein to do new art for whatever cards he wanted, but he had a budget for it and Browbeat is one of the cards in Tibalt's deck that is fantastically themed (hint: Sorin almost always wants to take 5 damage rather than let Tibalt reload his hand).

Tibalt is mono-red but his deck is black-red; while this doesn't match the card colors, the creative team was fully behind this idea because Tibalt's personality is really that of a black-red mage. He's out to cause pain and make every decision your opponent makes—and yes, also your own decisions—potentially painful. Really, really painful. 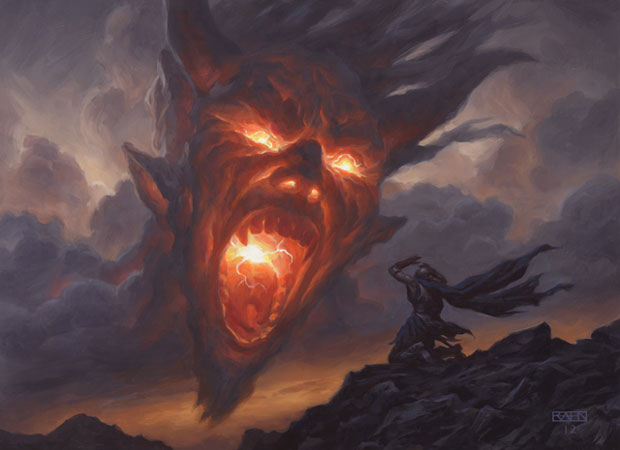 At some point, though, Kelly and I had to part ways. He had a meeting; I had to find another opponent. We shuffled up and played with both decks and I successfully lost with each of them.

So, my next opponent was Brian.

Brian's a great guy I work with. He's happy, energetic, and always positive. He's a Magic brand manager who wears a couple of hats, but, mainly, he oversees the relationships with partners like Ultrapro (sleeves and deckboxes), Araca (MTGMerch.com), and others.

So we shuffled up and this time I started with the Sorin deck.

1 Mark of the Vampire 1 Field of Souls 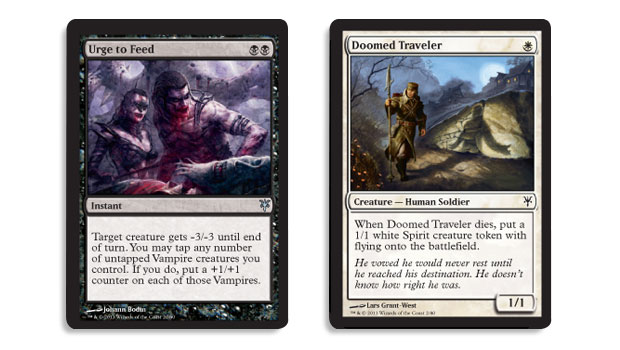 I followed the plan, dropped the Traveler, and went to battle. And almost immediately everything fell apart. Brian just had removal for everything AND he dropped Tibalt on turn two to begin the deck's draw-discard engine.

One of the major drawbacks players have with Tibalt is that his discard ability is random. While flavorful with red's reckless nature, it is still a sizable drawback in the game. Kelly, however, through flashback and unearth, gave the Tibalt deck a solid percentage of cards that, even if they get discarded, will prove useful to you. Or in this case, to Brian.

And they were all helpful to Brian. Turn after turn, he played spells and killed my things until I was overwhelmed. 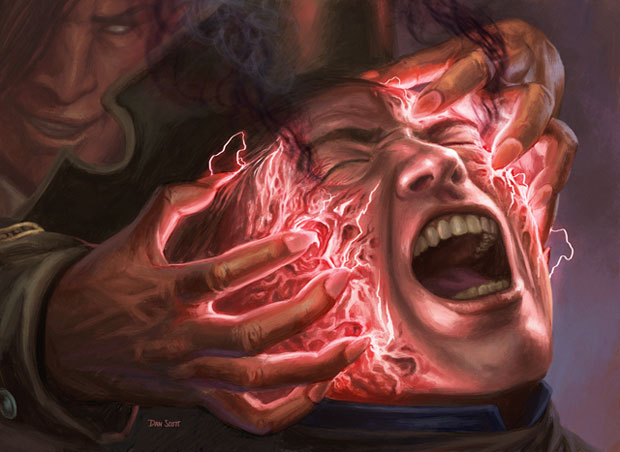 The other thing is that even though the Sorin deck was fighting valiantly, it just grew increasingly difficult for me to make any decisions. Brian had Lavaborn Muse on the field, so eventually it was a decision of "Do I play this helpful spell and drop below three cards in hand or do I save myself the damage?" Tibalt's deck loves to do that to the opponent—just slowly strangles him or her with bad choices. As Kelly put it: tightening the thumb screws.

And then, of course, on the critical turn when I was nearly dead, Brian played Blightning. 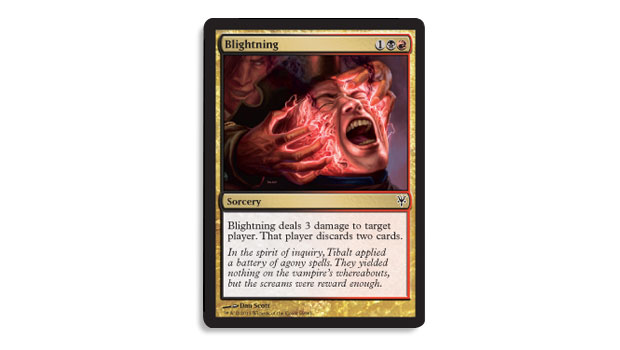 So my three-card hand became a one-card hand and I went down to 4 life. And the harsh truth of it all was that I was done for. I battled valiantly but just couldn't regain any footing.

To prove to him that Tibalt had cursed me to fail when I played these decks, we switched and put Tibalt in my hands.

I like Tibalt. I love red cards. But despite my fondness for red, Tibalt showed me no kindness. I got Tibalt out early just like Brian had and began using his draw and discard, but inevitably I kept drawing lands and discarding my spells—but not spells that could be used from the graveyard. And when I did manage to land a creature for Tibalt I got to see Brian Mortify it. 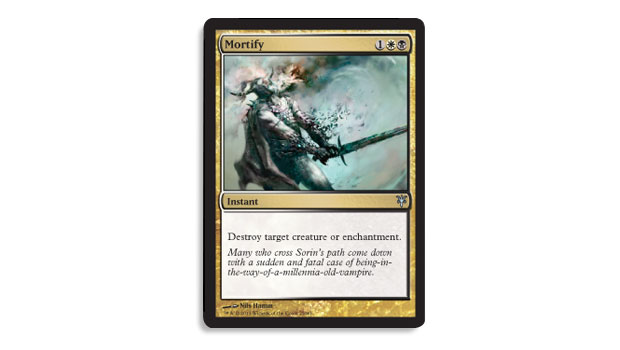 This game, though, was especially effective. Effective not only in beating me down with the Sorin deck but also in using the cards with new art, like the turn where Brian made five tokens: 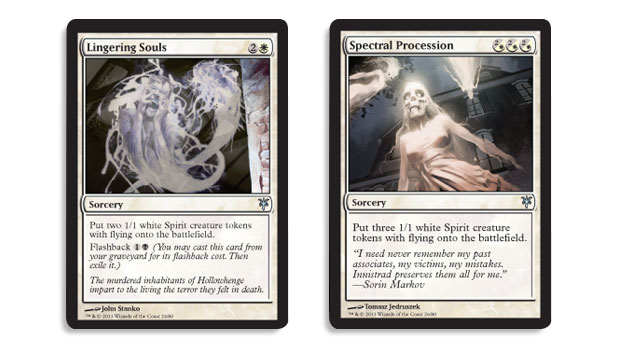 Technically, Lingering Souls isn't new art; the art was originally used as an FNM promo. But this art hasn't been seen before in a sealed product we've put up for sale. So it's kind of new art. 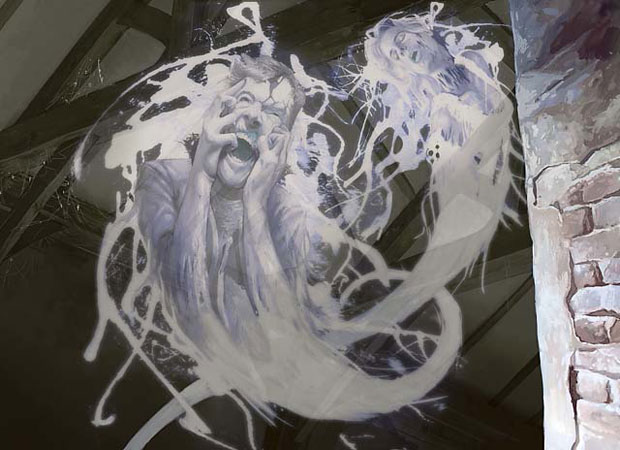 And as if the five flying tokens issuing the beatdown on me wasn't enough, it was sealed with a 3-point lethal Death Grasp. 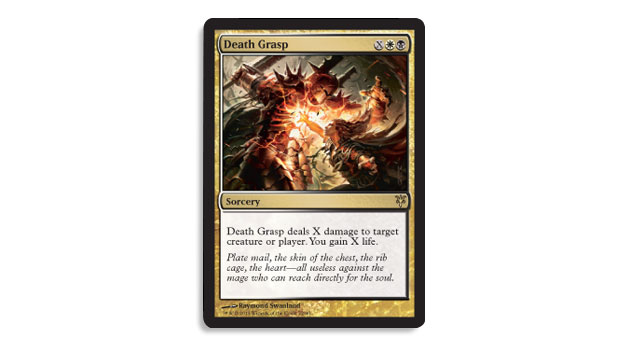 Frustration at ongoing losses is natural. It feels unfair because I can see that these decks are fair to each other, just not to me. I'm the victim of Tibalt's torturous acts and Sorin's well-conceived plans.

I talked some more with Kelly about card choices. One card he highlighted was Death Grasp, which had beaten out a card that perhaps might be well-fitting: Sorin's Vengeance. It seems like a natural inclusion; thematically, it fits beautifully. But here is an example of the tough choices a lead designer has to make: the card that is a natural fit or the card that has an opportunity for new art? Death Grasp isn't the Sorin's Vengeance we want, it's the Death Grasp we need. 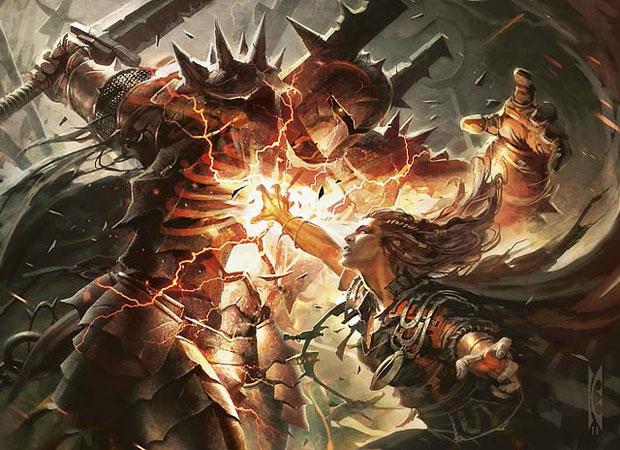 Our discussions kept wavering toward things Kelly could have done or cards he could have included. Both of these highlight that even though he didn't lead the design of a full Magic set, there are still lots of variables and things to consider with Duel Decks. The challenge is creating decks that are fun to play while maintaining balance and fulfilling the needs that R&D sees in the product, such as for providing new art.

For example, consider the fact that Tibalt's deck uses the graveyard as a resource with the discarding of cards. There is only one spell in Sorin's deck as graveyard hate: Decompose. There are so many potential graveyard-hate spells that Kelly could use, but the choice for Decompose was a purposeful one that provided a sizable punch in a single spell. Also, to mitigate its power it's a sorcery, eliminating the tricks that instant-speed graveyard hate would do to the Tibalt player. 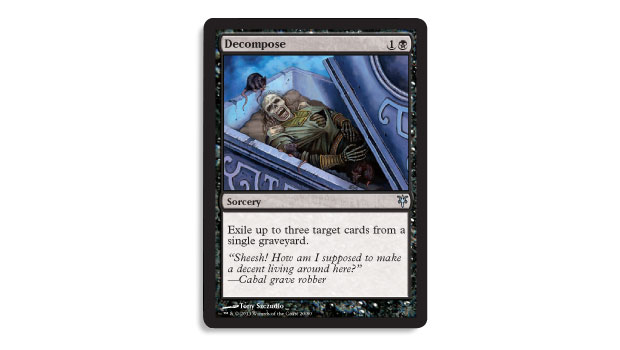 Sorin's deck also makes use of a Portal card, one that few players are likely familiar with: Ancient Craving. This is a perfect example of one of the things Duel Decks are meant to do. They are able to introduce new players, or reintroduce existing players, to cards they may not have known or may have forgotten about. 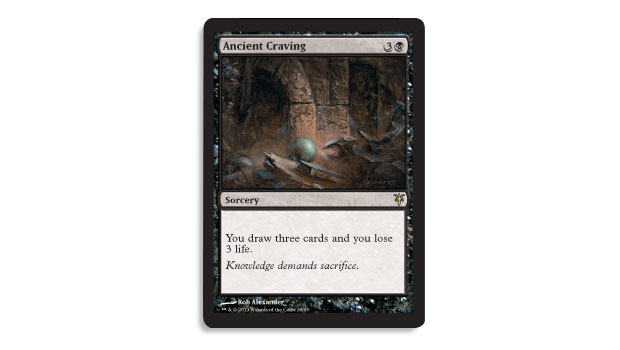 Even though I'm highlighting four consecutive losses, I want to reiterate that I had a great time playing these decks. Sure, the game of Magic can be frustrating sometimes, but it's the nature of the beast. A four-game test is not exactly conclusive, but it's enough for me to give these decks my stamp of approval.