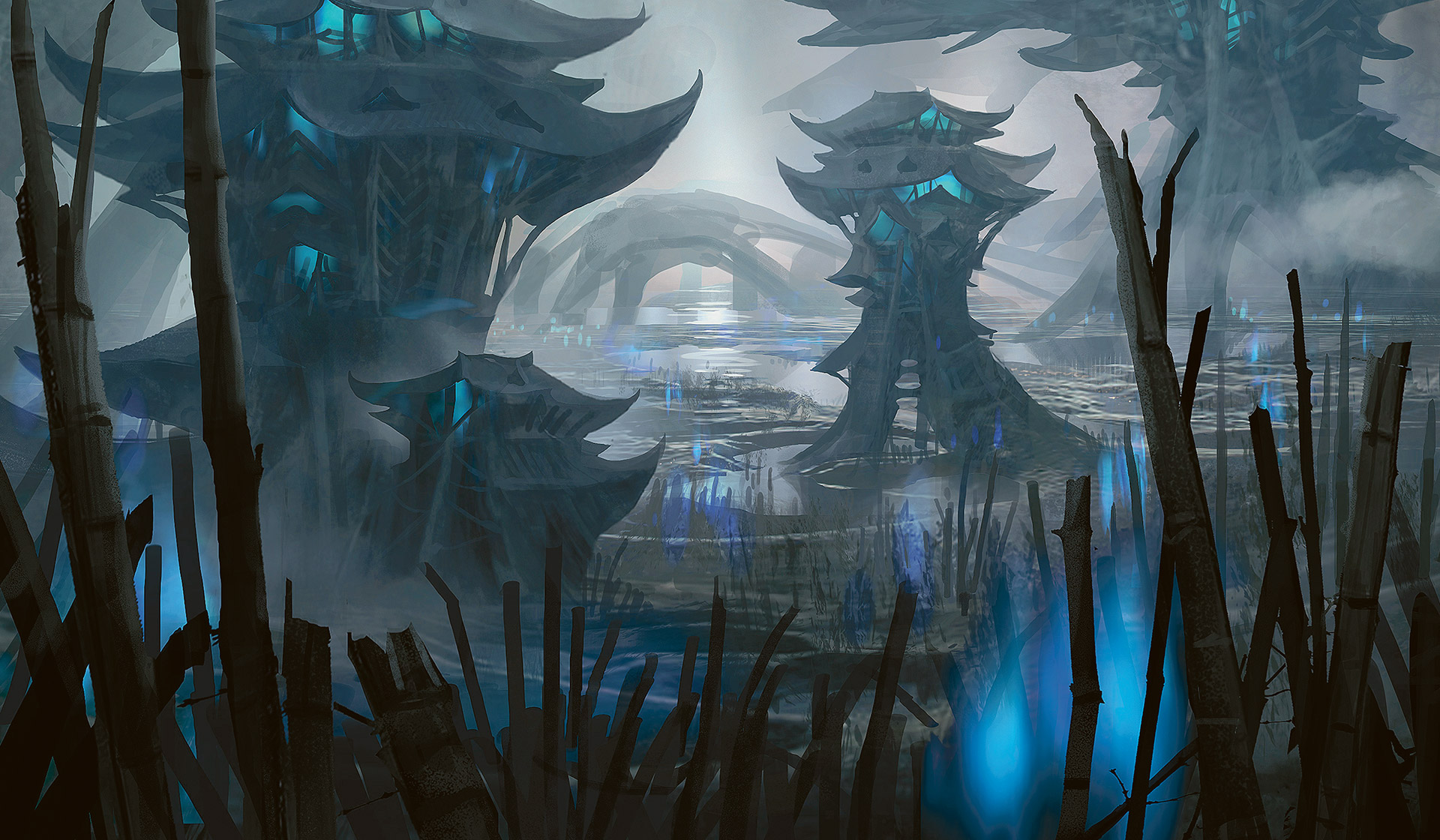 For many hundreds of years, Kamigawa's denizens peacefully worshipped the spirits of their world. Then suddenly their gods attacked, forcing the world into brutal war.

Reminiscent of sengoku-era Japan, this plane contains two symbiotic worlds: the utsushiyo, or material realm, and the kakuriyo, or kami spirit realm. Each kami was a divinity, and the way to happiness was to honor these gods and live by their ways. The inhabitants of Kamigawa were content with this life of devotion. Then the unimaginable happened. Their gods turned on them.

Slowly at first, the kami began to take form in the material world. Some scholars believed they were delivering a message or a warning. But their appearance was so alien and surreal, no true meaning could be discerned.

Meanwhile, the plane's most powerful warlord, the daimyo Takeshi Konda, ruled over the Towabara Plains from his stronghold at Eiganjo. Even as his armies and samurai secured more territory in Konda's name, the kami manifested in ever-greater numbers.

Then came the night that changed Kamigawa forever. A few miles from Eiganjo Castle, the kami set upon the town of Reito. Scores of spirit-world monstrosities swept through the town, killing nearly every living thing. Hundreds were slain and few survived. The Kami War had begun. Over the next twenty years, spirits of every shape and size would descend on the plains, ravaging everything in their path.

Throughout this siege, Konda remained within his stronghold, mysteriously safe from harm.

Kamigawa's people wondered why the kami betrayed them, even as they fought for survival. What had they done wrong?

In truth, it was the proud daimyo Konda who had begun the war. With aid from moonfolk allies, Konda kidnapped a kami to secure his own power and immortality. This outraged the great O-Kagachi, kami of all things, igniting an ire that would claim countless lives.

Only Konda's daughter Michiko and a stolen kami—an entity who calls herself Kyodai—have any hope of placating the kami and restoring a fragile peace to the land.

From behind the impenetrable walls of Eiganjo castle, Konda rules Kamigawa. Driven to ensure the prosperity of his kingdom, he crossed into the spirit world, bringing back immortality. This enraged the O-Kagachi, who retaliated with a spirit war against the plane's mortals.

This ronin samurai is driven by the desire for freedom and power. Bargaining with the myojin, he gained enough power to assist Michiko Konda in her quest to end the kami wars. Unfortunately, he quickly found himself at odds with his former partner Hidetsugu in the process.

Hidetsugu devoted his shaman talents to worshipping the Oni of Chaos. Believing all things shall be consumed by Oni, Hidetsugu worked to hasten this end through widespread destruction. Eventually defeated by the O-Kagachi, Oni scattered to the winds, reconstituted, and merged with Hidetsugu.

Konda bound the essence he stole from O-Kagachi in a physical disc that he kept hidden away. The O-Kagachi and kami manifested in the mortal world, slaying mortals in their hunt to find it. With O-Kagachi closing in, Toshiro performed a ritual to release the essence, which became the kami Kyodai.

Michiko set out to stop the kami war at any cost. With the help of Toshiro, she released the spirit imprisoned by her father, Konda. Wishing only for peace, Michiko merged with the spirit to become the new guardian of the spirit-mortal barrier, finally ending the war she despised.

These samurai dutifully protect Eiganjo castle. They ensure peace across Kamigawa by quickly silencing anyone who would dare oppose Konda. Though efficient and able to repel nearly all kami attacks, they were no match for O-Kagachi’s assault.

Under the leadership of Sensei Hisoka, scholars at the Minamo Academy research methods to defeat and pacify spirits. During the kami war, the Academy and its mages failed to repel an assault by Hidetsugu, who slaughtered all he found and summoned the Oni of Chaos to destroy the school.

The outcasts of Takenuma (mostly disgraced ronin and thieves) only look out for their own safety. Many find that the easiest way to do so is to become the hired muscle for the criminal overlord of Takenuma Swamp.

The shaman of the Sokenzan Mountains possess chilling attacks that can banish kami from the world of the living. In addition to fighting spirit invaders, they use their powerful defenses against the numerous akki and ogres that inhabit this mountain region.

Bloodthirsty and brutal, these creatures secure their territory by brute force and sinister deals with Oni. In exchange for power and assistance, the ogres destroy, inflict pain, and slaughter—all to satisfy the blood pacts with their dark divine one.

Dark and mighty forces of chaos and destruction, the oni seek to bring about the end to all life on Kamigawa. By making blood pacts with ogres, the oni grow in power—while also giving ogres permission to slaughter indiscriminately, without mercy.

Seldom seen outside of Jukai Forest, these fierce serpent warriors train to use all four of their arms during combat—to deadly perfect coordination. The orochi want no part in the kami war, other than to defend their territory and perhaps grow their own numbers.

Kitsune are the light and elegant humanoid fox creatures of Kamigawa. Quick with a blade and agile, these master swordsmen train many of the best samurai of the land. Their piety that is equaled only by the monks of Jukai Forest.

Soratami live among the clouds of Kamigawa, where they watch and learn. Known for their wisdom, they frequent Minamo Academy to share knowledge—but only as a means of advancing their own secret agenda.

These creatures have hard-shell backs and elongated limbs. They mainly reside in the Sokenzan Mountains. Known for their deadly pranks, the akki are very territorial and see all of Sokenzan as their domain.

Living primarily in the Takenuma Swamp, nezumi are shifty and strike only in their enemies' moments of greatest weakness. While easily defeated in outright single combat, most nezumi utilize their natural dexterity and ninja training to strike unseen from the shadows.

Clouds of bizarre creatures attack samurai in their sleep. Goblins flee from angry ice spirits. At the Minamo School, students of wizardry fight nonstop to stem a flow of materializing beings. Kamigawa is at war—humans against spirits.

As the spirit war raged on Kamigawa, those close to the daimyo Konda began to fear for his sanity. His isolation drove his willful daughter Michiko away to seek the truth about the war. To make matters worse, an unimaginably powerful kami, the O-Kagachi, had begun to manifest in the material world, devouring Kamigawa piece by piece.

Konda's crime against the kami is revealed: He stole a living spirit. The abductee wasn't just any kami, either. It was a guardian of the boundary between the material and spirit worlds. As the war rises to a fever pitch, fueled by Konda’s pride and the kami’s fury, the veil between the material world and the spirit world is torn to tatters. Could Kamigawa's last hope for peace be the daimyo's sole heir?

Chandra, Nissa, and Mrs. Pashiri sought to free Pia Nalaar, but were caught in a trap. With Liliana off on her own agenda, who can be relied on?