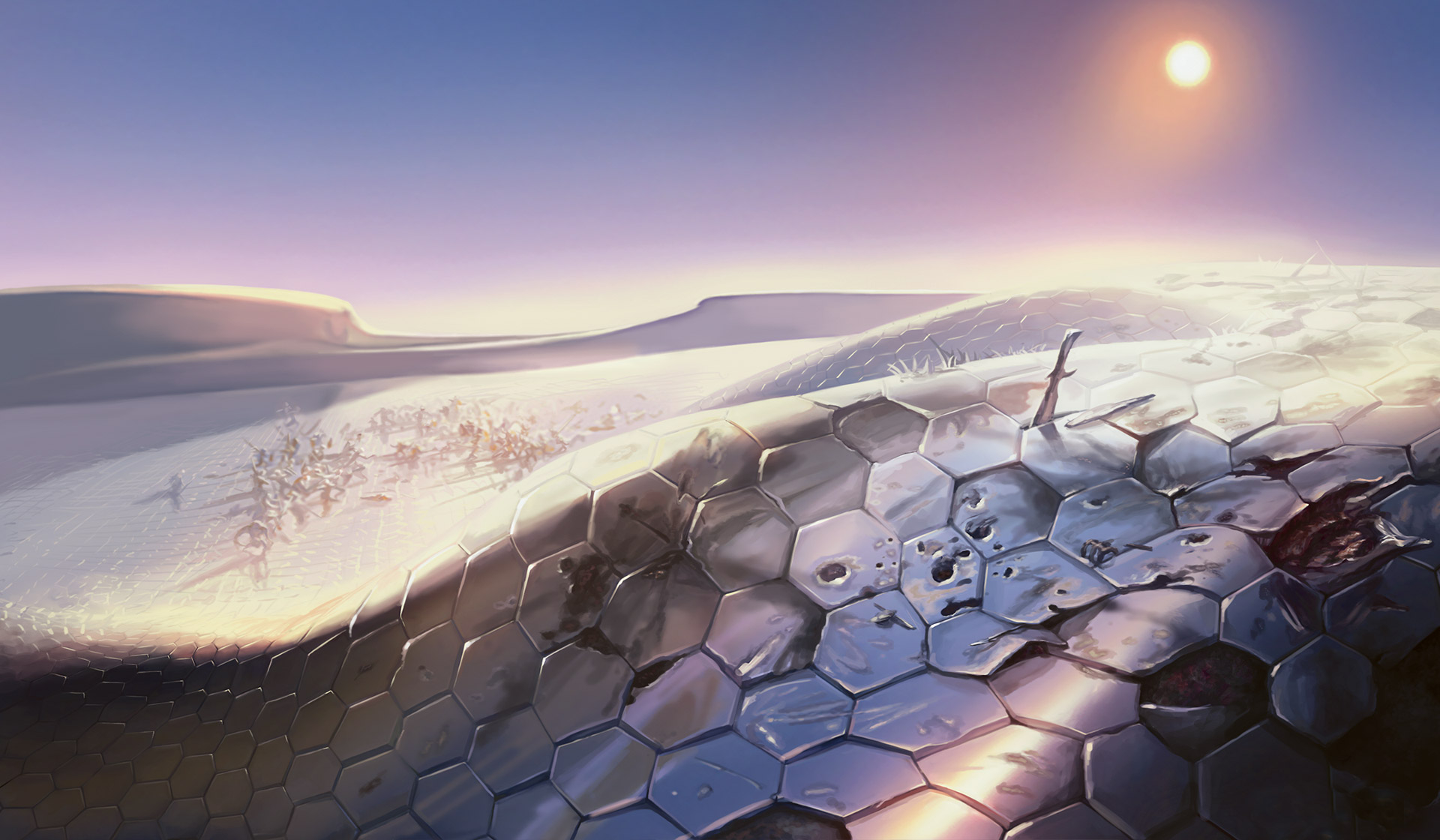 On Mirrodin, everything is made of metal—from forests to mountains to grass. Five suns cast their light on the plane, one for each color of mana.

Long ago, this metal plane was created by Karn, the silver golem built by the Planeswalker Urza. But something went wrong with Karn's creation. He unwittingly introduced a dark contagion: Phyrexian oil. Over the centuries, this oil has taken hold, infecting the land and breeding wave after wave of new horrors.

Even the Warden that Karn created to protect the plane grew unstable, gaining sentience and calling himself Memnarch. Over time, Memnarch grew paranoid and angry, feeling abandoned by his creator. As Memnarch's madness grew, so did his power. He kidnapped countless beings from other planes before he was finally defeated by the elf Glissa Sunseeker.

But all is still not well on Mirrodin. The first generations of Mirrans have vanished, returned to the planes from which they were taken. Meanwhile, the Phyrexian contagion continues to do its work. New Phyrexian horrors continue to emerge from Mirrodin's core, killing all Mirrans in their path and even counting the Mirran dead among their Phyrexian ranks.

But the Phyrexia factions are not unified in purpose. Its red-aligned faction, led by Urabrask, turns a blind eye to the citizens of Mirrodin, allowing them safe harbor.

The rift of the various mana factions makes New Phyrexia both stronger and weaker than ever before—stronger because it's more varied and adaptable, but weaker because it lacks unity of purpose.

Will any Mirrans survive? What new horrors await this brutal world? Will the Phyrexian infection spread to planes beyond?

Glissa, a rebellious troublemaker, questioned the elven traditions till the time when her entire home was destroyed. Obsessed with finding her parents' killer, she searches every inch of Mirrodin's metallic landscape, consumed with thoughts of vengeance.

A massive iron golem, Bosh was found sunken in the dark sludge of the Mephidross swamps. Once freed, Bosh had no memory and chose to accompany Glissa and Slobad. By their side, he searches Mirrodin for any details of his past along the way.

Highly intelligent by goblin standards, Slobad is a master at deconstructing and understanding Mirrodin’s inner workings. Glissa befriend him in her travels, and he vowed to help in any way that might defeat the terrible forces ruling the plane.

Memnarch is the ever-watchful master of Mirrodin's core, observing and manipulating all events from the luxury of the Panopticon. With his massive force of unthreatening myr covering every inch of Mirrodin's surface, Memnarch always keeps one step ahead of those who would see his downfall.

Proud, ferocious, and inspirational in battle, Raksha lead the leonin of Mirrodin from the great razor fields of Taj-nar. Rallying his leonine brethren, he urged them to become masters with all weapons to better defend their ancient dens.

The most civilized of the human factions on Mirrodin, the Auriok survive through diplomacy and trading with the leonin. Strong fighters, the Auriok rely heavily on magic to temporarily nullify or dismantle the threatening constructs that roam too close to their homes in the Razor Fields.

In Lumengrid, the neurok serve as humble assistants to their vedalken masters. Aiding in experiments, they seek knowledge in general, but more specifically, they aim to understand the mysterious blinkmoths found deep within Mirrodin.

Able to live in small pockets of the Mephidross, away from the nim, moriok survive by salvaging from the swamp. Surrounded by constant toxic fumes, many have taken to wearing protective head gear—though it does little to slow the madness that seeps into their brains.

Always eager for combat, the Vulshok scour their mountain home for iron ore, which they use to make weapons of unparalleled destruction. Their forces often fight alongside powerful shamans, who command lightning to augment the Vulshok’s brute strength.

With copper running through their bodies, the Sylvok live isolated in the dense Tangle Forest of Mirrodin. Hardly making contact with any other races, the sylvok are able to survive by living off of the forest’s fruits and the game they hunt.

Covered in patches of metal, the goblins of Mirrodin make their home within the Great Furnace. Their talents for artifact manipulation range from advanced to poke it with a stick.

Noble and loyal to their Kha, the leonin inhabit the Razor Fields of Mirrodin. They are able to keep the monstrous levelers and all others at bay with their flawless coordination tactics. They also craft some of the finest weapons on Mirrodin.

Adorned with beautiful copper filigree, the elves of Mirrodin live among the massive metallic trees of the Tangle. The most prized and protected of these is their Tree of Tales, upon which they inscribe their history and rich traditions.

Inhabiting the black sludge of Mephidross, nim zombies are quick to attack anyone foolhardy enough to travel the foul swamps. Controlled from the Vault of Whispers, the nim help enforce and expand the Geth’s dark reign.

Small, sleek, silent, and ever-present, these automaton observers are seldom aggressive. Often ignored or, at worst, seen as pests, few stop to think about the myrs' true purpose.

In a distant corner of the Multiverse lies Mirrodin, a plane made entirely of metal. Discover a new Magic story with new characters and new Equipment cards, all set in an artifact-rich environment.

It’s everything you loved about Mirrodin and more: more Equipment, more artifacts, and more abilities. Throw in the first indestructible artifacts, too, and it packs a memorable punch.

Fifth Dawn journeys deep inside the plane’s core to take the Mirrodin block out with a bang: bigger creatures, faster Equipment, and more reasons to play all five colors. Throw in card combos guaranteed to obliterate and you get a set you have to play to believe.

The metal plane of Mirrodin shines under the light of five suns. But it’s now tarnished by the deadly scourge known as Phyrexia, and dark conflict is brewing. Which side will you command?

The Phyrexian assault on the metallic plane of Mirrodin intensifies, as its citizens rally to survive and overcome. Both sides bring the full might of their arsenals: artifacts, poison, equipment, and Myr. They have some deadly new tricks, too ...

It came not in a fair contest of warriors, but as a wave of unstoppable slaughter. Though the Mirrans bravely resisted the onslaught from inside their own world, their efforts were for naught. Mirrodin is now New Phyrexia.