Playing Magic with Friends When You Can't Gather

So, you're sitting at home. You have your tricked-out Commander deck. You'd love to play some Magic to pass the time, but leaving the house to interact isn't something on the table in today's world.

What's a Magic player to do? 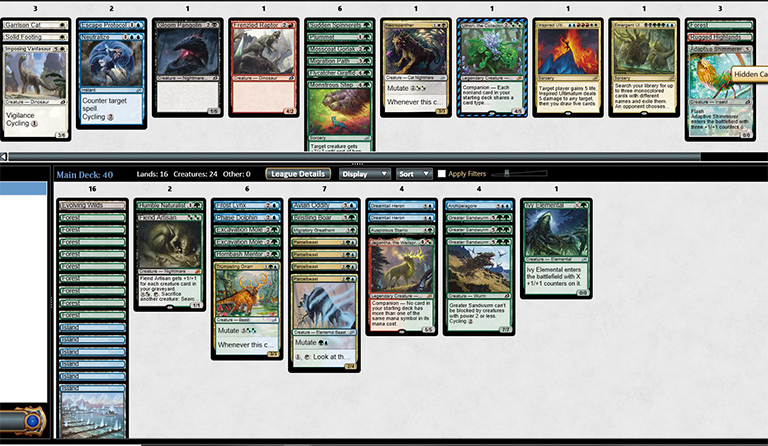 If you haven't fired either of those up in a while, now is a great time: a lot of improvements have been made and are forthcoming (did you hear about MTG Arena's 8-player drafts?!) that make playing online better than ever. To play multiplayer formats like Commander, many people I know are flocking to Magic Online to play on there with some form of voice chat running in the background with friends. Oh, and not to mention Cube Draft is available too!

I love playing Magic digitally, and I encourage you to check it out. But I also know that for many of you, me included, a huge part of Magic is about playing in-person, whether it's showing off your hard-to-find Phyrexian Elesh Norn, Grand Cenobite promo, or just talking by voice with whomever you're playing.

This is a problem players all around the world face right now. We all have our awesome decks, our collections we've curated, and a deep love of the game—and nowhere to go and play.

So, today, I want to talk about something new and gaining popularity while we're all at home: webcam Magic.

Growing up, I remember me and a few of my friends would play Magic over the phone. We lived miles away from one another, so instead of meeting up, we'd call each other, play a game, and try to remember what the board states were.

It was hard to remember. It was difficult to communicate. And yes, there were rampant cheating accusations.

Well, we live in an age now where we can do a bit better than that.

Cheap and readily accessible webcams are everywhere. Whether built into your laptop or bought separately as a cheap purchase, they're pretty commonplace. You can even use your cell phone as one with the right apps!

I first heard of people playing Magic over webcam as people began to get stuck at home, and I'll admit: my first reaction was to raise an eyebrow. Not only did it sound difficult, it sounded silly. I mean, wouldn't you need some kind of streaming setup, and wouldn't it move at a glacial place?

I dove in to explore the options—and boy, how wrong I was.

While yes, it does play a little slower than an in-person game of Magic, and there is an extra layer of communication needed to make things work, it mostly plays about as well as normal Magic.

So how can you go about this? Read on!

Have Friends, Will Internet

Okay, so let's say you have a specific few friends you want to play with, or a larger playgroup. (Say, a store—be sure to check your store's Facebook page or similar to see if they're helping organize any way to stay connected!) After you figure out when you want to play, you're going to need to determine how you're going to screenshare.

There are a ton of ways to set this up online and all sorts of videoconferencing options. If you and your friends already have something you like, that's probably the ticket. For the purposes of this discussion, though, I'm going to use Zoom, but Discord, Google Hangouts, and others work just as well.

With Zoom, you can see everyone's screen and talk at the same time, the video quality is compressed in such a way that even less-powerful computers can run it well, and there's even an app you can run off of your phone to stream from your phone in the event you don't have a webcam. You can get sessions of up to 40 minutes for free (which you can always just elect to restart), or you can stay on for pretty much as long as you want to play if a single person gets an inexpensive license.

That said, there are plenty of other valid options as well, such as Discord, which I'll get to in a little bit.

Once everyone has their programs ready to go, the concern becomes how you actually do this whole webcam thing. If you have a nice camera setup already, I probably don't need to explain how to set it up. But if you have a webcam laptop (like I do), it's usually pretty easy to position it to point down on your board—literally stacking your laptop on books (or booster boxes if you want to feel really awesome) and pointing the camera down has worked great for me.

If you're going to use your phone, there are all kinds of ways to set that up. For a fun one, check out this guide from the game store Just Games, which tells you how to easily turn an extra bundle box into a holder for streaming Magic from your phone! Pretty cool stuff.

Additionally, if you're interested in the finer points of lighting and equipment, then I highly recommend this article by The Spike Feeders over on TCGPlayer—I'm no lighting guru, but their advice has been great for me.

Looking for a Game

Okay, but what if you don't just want to play with your friends? What if you want to play games with all sorts of people, much like how you could at a MagicFest?

Well, one upside to this is that the internet makes it very easy to connect with anybody in the world! This is likely to be most applicable to Commander, so I'll focus on that aspect.

While everyone is inside, playing Commander via webcam has surged in popularity. Loads of players have been doing it, including Commander Advisory Group member Olivia-Gobert Hicks, Commander Vs. member Jeremy Noell, and even Sheldon Menery himself. I've been getting in on the fun, too! Being bound by space is no longer an issue.

While there are a couple places to do this, the centralized spot is the PlayEDH Discord server. If you've never used Discord before, it's sort of like the modern-day version of chat rooms: tons of places, from small to large, for people to congregate and talk, and you can make your own. But this ain't your 1990s AOL-style chatroom: there are so many features and options that make it awesome. You can join the PlayEDH server here: https://discord.gg/49NaUvq

Once you're in, read through the guide. It'll explain what to do next—but the short version is that you label yourself in a certain Commander deck power band, and then you enter a room with many others of the same band. From there, you just easily use the room to match up! It was surprisingly seamless, and when I joined in on a Saturday afternoon, games were firing on the regular.

From there, you can either meet up on any webcam-sharing service of your choice or use Discord's built-in video chat functionality. So, you can use the same setup as described before, all through the program! It's pretty easy to do and lets you fire off one Commander game into the next.

Finally, there are a few things to keep in mind when setting up to play on a webcam:

As this continues to pick up in popularity, a lot of people are writing about it, talking about it, and most of all: doing it! If you just want to watch some games and chat, I highly recommend Sheldon Menery's article over on StarCityGames that lists a number of content creators as well as when and where they're streaming if you just want to watch some wild games of Commander and see what happens.

If you have any thoughts or questions at all, please feel free to reach out! You can always send me a tweet, ask me a question on my Tumblr, message me on Instagram, or just send an email.

I hope you're all staying safe and doing well, and may this article bring a little extra Magic into your life. Perhaps I'll run into you out there somewhere on the other side of a Magic webcam. Have fun!