When much of public gaming around the world closed down in early 2020, Magic: The Gathering Arena became one of the most practical ways for many players to engage with Magic, and especially with Magic's competitive system. With the return of the Pro Tour and high-level tabletop play, MTG Arena had an opportunity to update its role in the greater Premier Play system—while also offering its own unique events for digital players.

Alongside new events, we are refreshing how the MTG Arena competitive path works. During the past two years, playing the ranked ladders has been the primary way for a player to begin their competitive journey. As part of reworking our system, and looking to offer a greater variety of paths, we're de-emphasizing ladder play while creating new, flexible pathways for players to find their competitive footing on MTG Arena. Whether you play daily or only once in a while, we hope to have a competitive path that works for you. 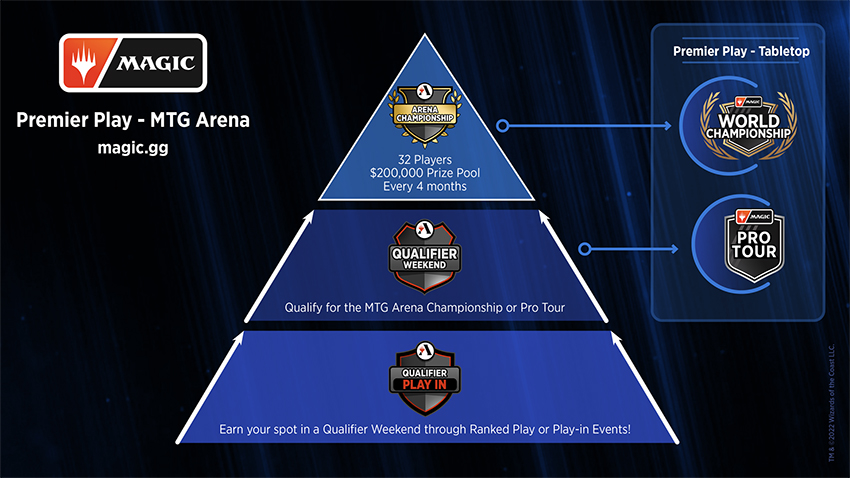 Let's dig into the details, starting at the top:

WELCOME TO THE ARENA CHAMPIONSHIP

Each Championship will feature 32 top players, determined by four months' worth of competitive ladder and event play, competing for a $200,000 prize pool.

So, how do you claim your seat at an Arena Championship? It's through a familiar path: our monthly Qualifier Weekend event.

QUALIFIER WEEKEND: OUT WITH THE OLD, IN WITH THE NEW

Many elements of Qualifier Weekend events on MTG Arena will be recognizable, but the details—and especially the stakes—are changing.

Players can earn their spot in Qualifier Weekends through two paths—ladder play or event play. (Find the details on this in the next section.)

There will be four Qualifier Weekends feeding each Arena Championship. The Qualifier Weekend itself still consists of two days of Best-of-Three matches in a shared format. Players will try to reach seven match wins before taking two match losses on each day, competing for the following:

WHERE DO I START?

As mentioned above, players must still earn their entry to a Qualifier Weekend, and there are now two main paths to get there.

The first new path to that entry is the Qualifier Play-In event. This open event allows players to earn their seat through a single session of focused play, rather than a month-long ladder climb. Each month will have two Qualifier Play-In opportunities:

Players can enter a Qualifier Play-In with a 20,000 gold or 4,000 gem entry fee or by collecting 20 Play-In Points from regular events in MTG Arena. Reaching maximum wins in any evergreen Constructed event (such as a Historic event or Traditional Historic event) or in a Traditional Draft event will now award Play-In Points in addition to gems and packs. (For those new structures, see further below.)

Oko doesn't play that much MTG Arena, as his favorite format is Commander in person with friends. But he also enjoys drafting, so he knows the latest set well. He logs on Friday to play the Limited format Qualifier Play-In, and he reaches maximum wins. He then wins out on both Day 1 and Day 2 of the Qualifier Weekend, earning a seat at the next Arena Championship for his weekend's play.

Garruk spends most of his MTG Arena time playing Traditional Alchemy events to build his collection. He earns maximum-win rewards frequently, sometimes multiple times in a weekend. He has collected enough Play-In Points to enter the Qualifier Play-In, but this month's format is Limited. He decides to save his points for next month when the format will be Alchemy. He expects to have enough points to enter multiple times and make sure he gets his chance at the Qualifier Weekend.

The second main path to a Qualifier Weekend is still a top-ranked ladder finish. Players who finish in the top 250 of either the Constructed or Limited ladder at the end of a month will receive automatic entry into the next month's Qualifier Weekend. (This will now be served by an event entry token instead of a Qualifier Badge as in the past.) Players who finish in the top 1,200 of either ladder (but not the top 250) will instead receive enough Play-In Points for one entry to a Qualifier Play-In event, described above.

Note: Since play is already underway for the April 2022 ranked ladders, players who finish in the top 1,200 of either ladder during this month will still qualify directly for the Qualifier Weekend events. The May ranked ladders will be the first ones to follow the new structure.

Huatli usually finishes the ranked season in the high percentages, but this month, a strong run on the last day landed her in the low 800s. She earns an entry to the upcoming Qualifier Play-In, and she chooses to play in the Best-of-One event where she feels her Dinosaurs deck will have the best opportunity to do well. She reaches maximum wins and gets into the Qualifier Weekend, but she then reaches only three wins on Day 1. She walks away with 11,000 gems in total from the two events to help fuel her play for next month when she wants to do even better.

Time for a quick recap. The three basic steps of the competitive path on MTG Arena are:

Doing well enough in any of these steps will take you up the path to the next step. If you keep excelling, you will find yourself at the top of the mountain—including at a tabletop Pro Tour or even the Magic World Championship!

Beginning with the release of Streets of New Capenna, evergreen Constructed events for all permanent MTG Arena formats will now have updated structures that incorporate Play-In Points so that players can use these events to enter the competitive path. They also now have both higher entry fees and higher rewards that replace the previous gold and individual card rewards (ICRs) with gems and packs. These changes are intended to let players build their collection through Constructed play more quickly and reliably. These are the new structures:

Also beginning with Streets of New Capenna, Traditional Drafts will have a new structure. This change reduces some of the top-heaviness of the event and incorporates Play-In Points.

Play-In Points earned from any of these events can be combined, and players may use their Play-In Points to enter either type of Qualifier Play-In event in any month.

THE BEGINNING OF THE PATH

Phew, we made it to the end of the article! But really, it's just the beginning of a new competitive dream, and your path to the Arena Championships. Answers to questions, additional dates, and format details will all be available soon, and we are ready to make any needed adjustments along the way to help this path serve all of our different players. We are excited for our first Arena Championship later this year, and we hope you are, too!