By Megan O'Malley and Jay Parker

The future looks even brighter with new cards, a new digital mechanic, and some quality-of-life improvements coming to you very soon in MTG Arena! Let's shine some light on these changes, shall we?

But before we get to that, in case you missed it, tomorrow, Thursday, March 17 at 2:30 p.m. PT, we'll be live on Weekly MTG to talk about the MTG Arena economy. We know this has been a hot topic amongst our players, especially since the release of Alchemy, and we wanted to acknowledge some of the feedback we've received, give some insight on our design philosophies and intentions, as well as open it up for a live Q&A.

There will be an accompanying article that will cover some of these topics in good old-fashioned written form, however, we encourage you to watch the stream for more information and insight.

Alright, now back to the game update. We're going to light up the game with a bigger and brighter meta as we introduce 30 digital-only cards featuring mechanics designed specifically for digital play for our Alchemy and Historic formats. 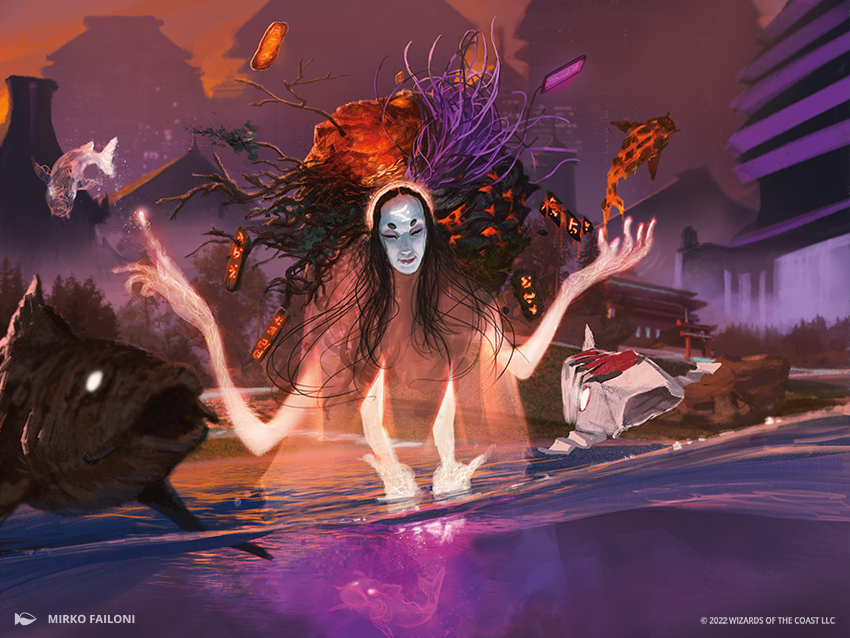 Judging by the Alchemy: Kamigawa card image gallery, things are going to get a little intense as you conjure, modify, draft cards from spellbooks, and ninjutsu your way onto the battlefield as we combine everything Kamigawa: Neon Dynasty and Alchemy have to offer in these new cards.

Intensity is a card designation that starts at a certain value and will perpetually change based on the card's rules text—for example, attacking or tapping a card. 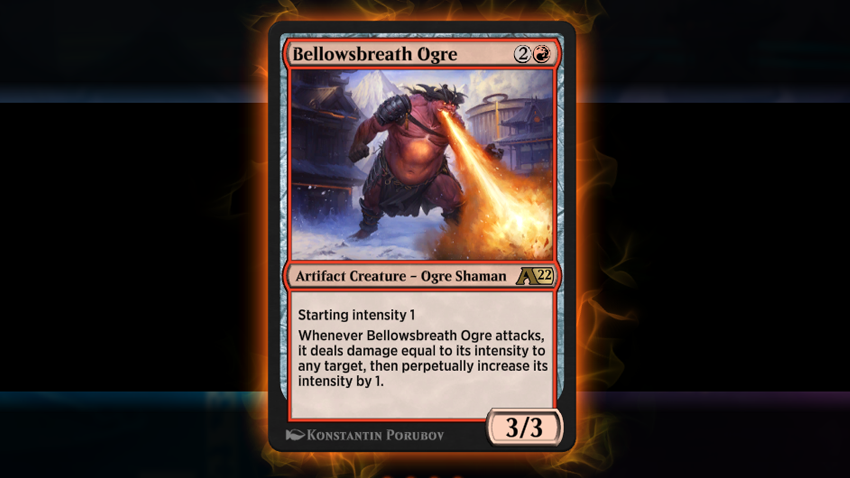 Whenever a card's intensity increases, you'll see a badge and updated rules text on the card to show the current intensity. Additionally as part of this update, we've reworked Static Discharge from Jumpstart: Historic Horizons to use the intensity ability: 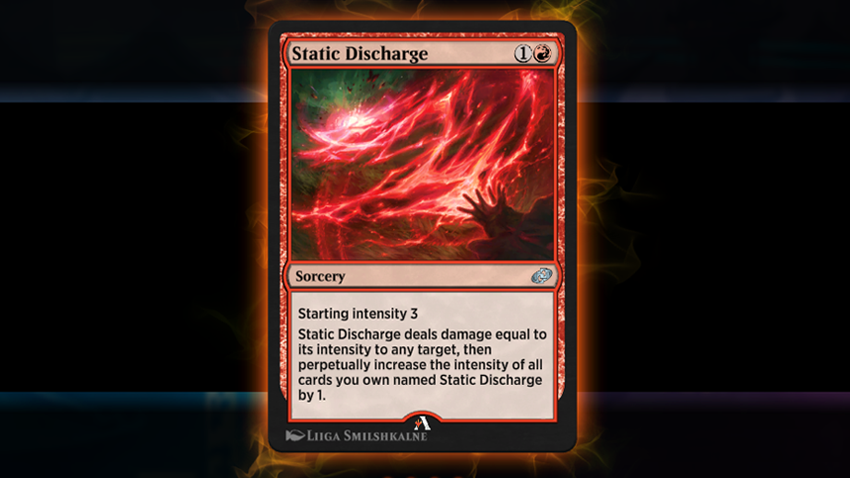 Do you want to try out some of the new cards, earn some individual card rewards and Mastery XP, without having to build a deck or pay an entry fee? Well, this is the event for you! We've put together four event decks that you can pick and play with, change between games, and earn rewards with—at no cost to you! 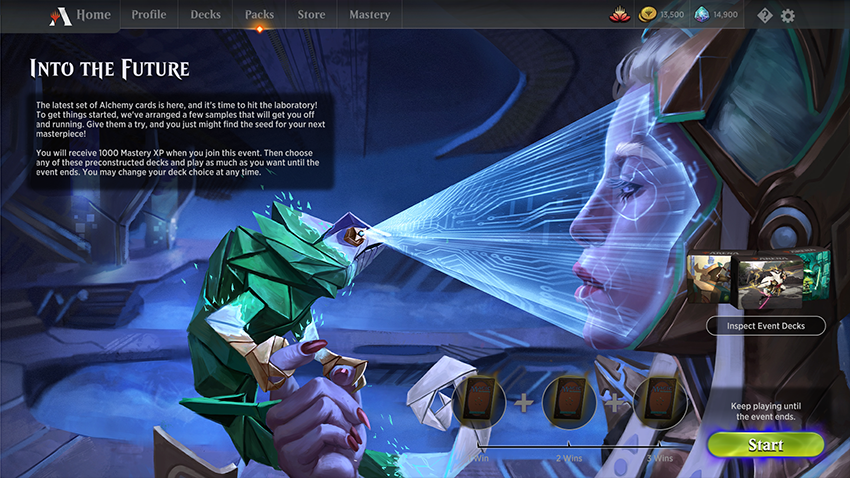 Into the Future will be available in game from March 17–19.

After you've had a chance to try out the new cards that you can brew and build with, bring your finest Best-of-Three Alchemy deck to our first Alchemy Metagame Challenge. 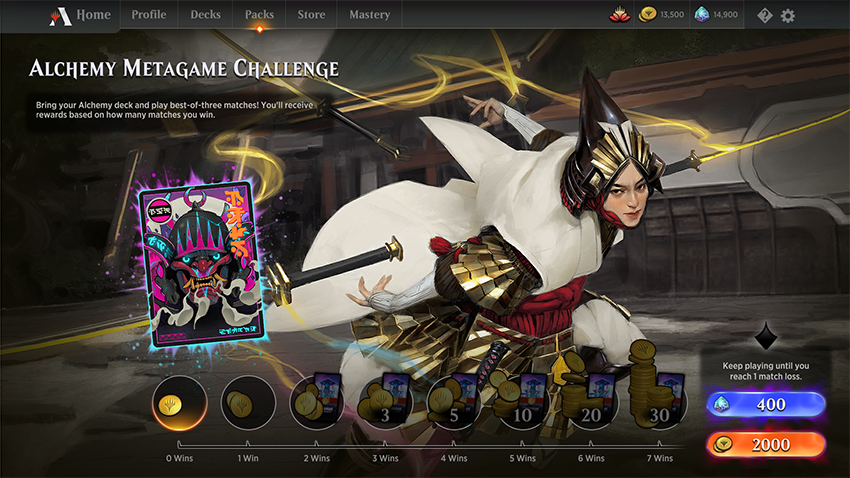 Alongside Alchemy: Kamigawa, we're making a few adjustments to our play blade to help improve its functionality, and to help you find the events and queues you're looking for. First, our Events tab now has its own set of filters: All, In Progress, New, Limited, and Constructed. 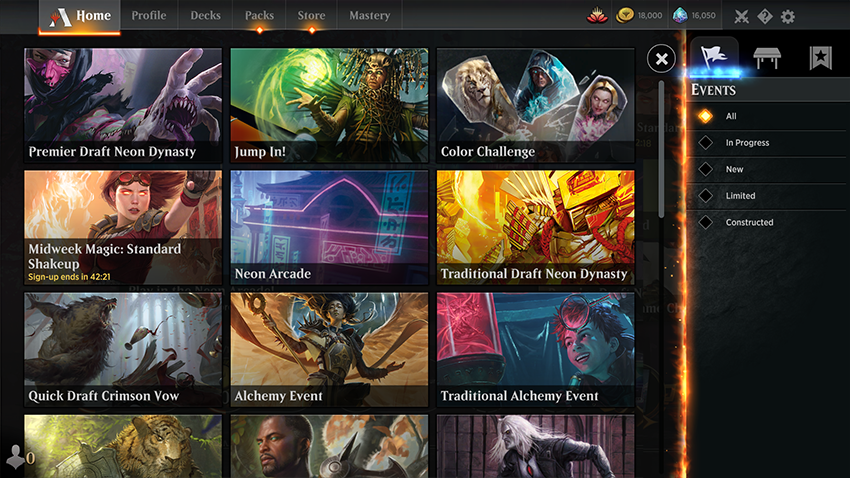 Secondly, our Last Played tab has been expanded and will also show some of your recently played events and queues alongside the well, whatever it was that you last played. 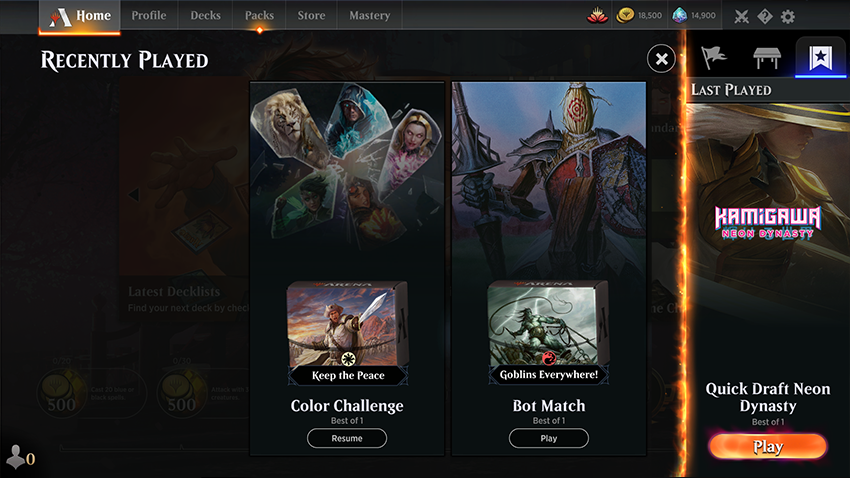 Both changes, alongside some other small tweaks and bug fixes to the play blade, will be available in tomorrow's game update.

Okay, this is a minor one, but we'll be honest—it's always kind of bothered us and enough is enough; we're changing it. When viewing unopened packs in your collection, it's now organized from newest to oldest by set release. 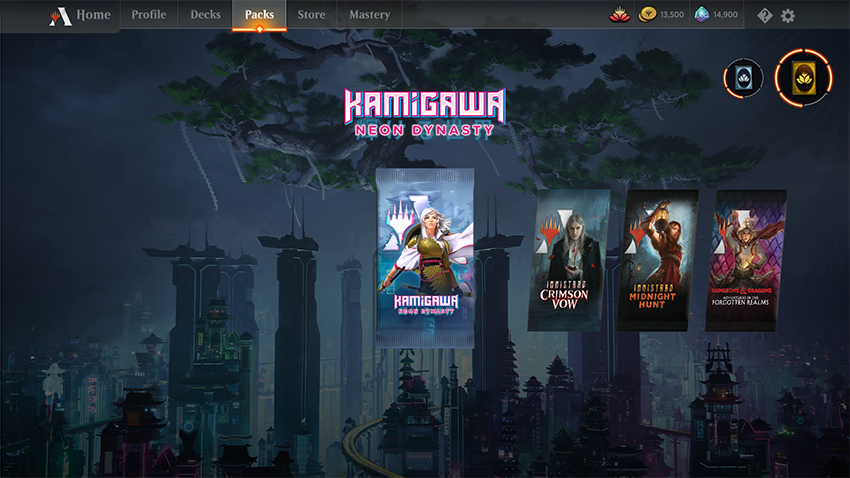 Another small cosmetic tweak is that you'll be able to use alternate art for you deck boxes.

We have more cosmetic quality-of-life improvements coming soon—as in, soon enough that we're willing to use the word "soon." Stay tuned in the upcoming weeks for more details!

And that's it for now! With the game update only a day away, we figured we'd keep this State of the Game short and to the point, as it'll soon be in your hands to experience for yourself. Keep an eye on our MTG Arena Status Page for the latest information on maintenance times and status, and follow us @MTG_Arena for even more news and updates.