elcome to Magic 2014 Preview Week. This week, we'll be taking a peek at the new core set, and I'll be talking in detail about a popular mechanic that is returning. (If you've been reading the Internet or even just the title of this column, you should have a good idea what that mechanic is.) I'll introduce the design team, show you a preview card, give you a little history, and then answer some questions I've been getting about you know what.

The Core, The Merrier

As always, I like to begin by introducing you to the people responsible for the design of the set I'm about to talk about.

So what does Magic 2014 have in common with both Return to Ravnica and Dragon's Maze? The lead designers of all three sets were finalists in the first Great Designer Search (Mark Globus, Ken Nagle, and Alexis Janson respectively). Mark came in 4th (Alexis 1st, Ken 2nd, and Graham Hopkins 3rd). Mark managed to parlay his performance in the GDS into a job in Wizards's digital department. From there, he got to know the members of R&D and eventually moved over to become Magic's producer (i.e., the guy who juggles all the moving parts to make sure the logistics work).

Mark still kept his hand in designing through working on numerous design teams. When it came time to pick a lead designer for Magic 2014, Aaron asked me, "How about Mark Globus?" and I replied that I felt he had earned the opportunity and that I thought he'd do a wonderful job. Which, by the way, he did.

One of the things I've always been impressed with by Mark is his drive to improve. For example, he wanted to get better at design, so he started making his own set merely as a means to practice and get feedback. One of the mechanics from his set, metalcraft, even got tweaked and used in Scars of Mirrodin. The big question wasn't if Mark would get to lead his own set, but when. And seeing his work on Magic 2014, the next question is what will he do next?

Every design has a core developer on it to make sure that the design keeps developmental issues in mind. While Tom does an excellent job of this he also has proven to be pretty adept at asking good design questions as well. One of my favorite things about having Tom on a design team is that he always manages to find new ways to examine design problems. Tom is also vigilant in making sure the designs make flavor sense, which is extra important for a core set.

Most design teams also have a representative from the creative team. Usually, that person is the one doing the card concepting (i.e., figuring out what each card represents flavorfully) for the set. In Adam's case, he was also in charge of the names and flavor text. Adam is always a great addition to a design team not only for his flavor knowledge but also for his energy. He is always happy and excited and comes in every meeting eager to discover new things.

This set got a chance for GDS1 to intermingle withGDS2. Shawn got his start at Wizards by coming in 2nd in the second Great Designer Search. The reason he managed to come in 2nd was that Shawn has a knack for getting a sense of a design and then finding new ways to approach it. Shawn also is one of the best top-down designers I've seen and the core set is a place that loves top-down design.

Design teams have something we call the "fifth slot," which is a slot for someone whose day-to-day job is not doing Magic design, development, or creative. Ken's day job is overseeing R&D's Magic digital team that works on everything digital with a Magic component (Magic Online and Duels of the Planeswalkers being the two largest). The reason for having the "fifth slot" is that we feel it's good for Magic design teams to have some outside influence so that we don't get caught up in a group think. Ken is a longtime player of Magic so he understands the game well, but from a slightly different slant, which means that he asks questions that no one else does. I like having Ken on design teams because he has a habit of just cutting to the core of an issue. We'll spend many minutes trying to figure out the problem when Ken will speak up and say, "I think it's this."

Now that we've met the team, it's time to meet the preview card. Let me reveal ahead of time that it's a Sliver from the past with a new makeover to match the current Sliver functionality. 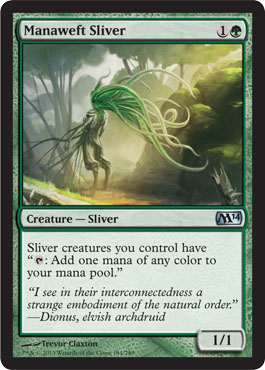 Yes, this is an updated Gemhide Sliver from Time Spiral. While Magic 2014 introduces a bunch of new Slivers, we also felt it was important to make new versions of some popular Slivers from the past.

My plan for the rest of this column is to answer your many questions about Slivers. Before I do that, though, I thought I'd spend a few paragraphs talking about the history of Slivers.

"What Are They? Chopped Sliver?"

Back in March, 2004, we had Sliver Week and I used my column to explain the origin of the Slivers ("Sliver Me Timbers"). For those who don't want to click the link, Slivers were originally designed by Mike Elliott for a set called "Astral Ways" he made before he came to work for Wizards. When I put him on the Tempest design team, Mike turned in a number of mechanics from that set including a series of cards he called Slivers. The flavor originally was that one character from the astral world got broken into fragments and fell to our world as Slivers. These creatures were each part of one being, which is how they worked together.

During Tempest, we re-flavored the Slivers as empathic shapechanging creatures that shared a group mind. The idea was if one Sliver learned how to form wings, the whole hive would also gain that ability. Interestingly, by the way, in the story there was a geographical limit to how far the hive mind reached, meaning that if it were far enough away, a Sliver did not get the bonus from the herd. The Slivers were a creature race Volrath discovered (it was never said from where) and he had been experimenting on them. (Metallic Sliver was an artificial Sliver he made to spy on the herd. That's why it only leeches abilities and doesn't grant any.) 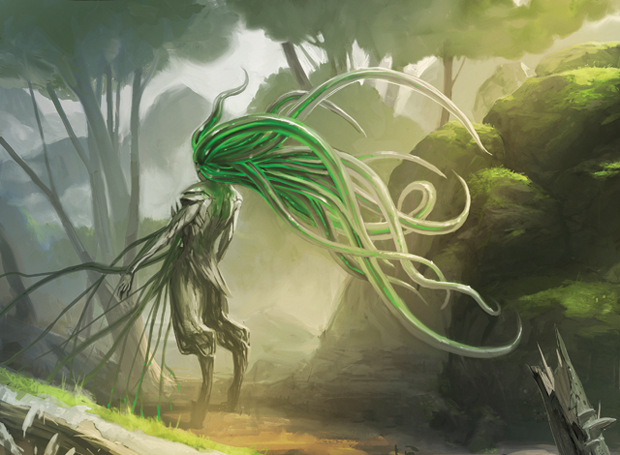 Slivers first showed up in Tempest block, showing up in both Tempest and Stronghold. They then returned during Onslaught block in the middle set,Legions. (The article on Slivers stops here because at the time it was written that was all that had happened.) The Slivers next showed up in all three sets of the Time Spiral block. Magic 2014 is their fourth appearance. Few Magic mechanics that aren't evergreen have been used in four different blocks. (The only other one that pops into my head is cycling.)

The reason they have been used so much is that they've always been a hit with players. In fact, when I get asked about how to make popular linear mechanics (i.e., mechanics that push you toward including a subset of other cards—read this if you want to know more) Slivers are my go-to example.

With our history lesson out of the way, let's get to the meat of this column: questions from all of you about Slivers. I started by posting the following on my Twitter account (@maro254):