Today, I'm proud to introduce one of Magic's new Planeswalkers: Aminatou! Her name is pronounced Ah-mee-NAH-too, and she is our youngest (and arguably most intimidating) Planeswalker. 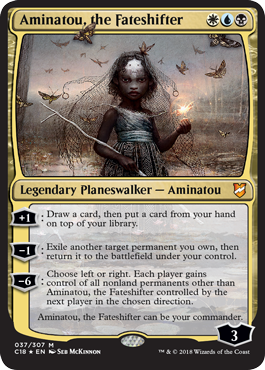 Aminatou's magic revolves around fate and the manipulation of destiny. She can perceive the matrix of fate and foresee the destinies of others. Aminatou's spark ignited at an incredibly young age, and for seemingly no reason at all. If one were to ask her why it did so, she would answer, "Because I foresaw it would one day, and I decided I didn't want to wait for that."

Like all eight-year-olds, Aminatou is playful and fickle. Her own destiny is something she toys with on a daily basis; some days she'll grow up to be a singer, other days a powerful wizard, some days a trainer of beautiful beasts and other days a conquering queen. She is young, but because of her powers, possesses the knowledge of a lifetime. That knowledge is often offset by her childlike capriciousness—it may be one thing to wield great knowledge, but utilizing it can be difficult when one still has the decision-making skills of a child.

Aminatou is mercurial but not impulsive, and programmatic despite the chaos she leaves wherever she goes. A child's logic guides her choices for now, and while those who know her are certain she'll grow out of it, the results of her current temperamental nature can be worrisome. Aminatou's independent nature often gets the better of her; her parentage is a mystery in that she only ever has them when she wants to be taken care of.

The most striking feature of Aminatou is her calm demeanor. She would never throw a tantrum (why throw a tantrum when you know what the outcome is?) and only laughs when something manages to surprise her. Which is rare.

Her magic is expressed through intangible moths. When one of her wisps of power lands on a person it nudges their fate in whatever direction Aminatou chooses. That shift in destiny can be as small as stepping on a thorn or as broad as shifting the day of someone's death, and Aminatou is fairly dispassionate about how firmly she adjusts a stranger's fate. Those who know what she can do go out of their way to keep her happy; they know better than to literally tempt fate. Despite a power suite that could easily destroy existence, Aminatou largely serves her own needs, as she is eight. While she is capable of tremendous things, she more frequently uses her skills for smaller miracles—perhaps moving a rock so someone will trip on it later and meet the love of their life or giving a stranger a knife if she foresees them being mugged later.

Aminatou's home plane is a mystery, mostly because she herself refuses to talk about it; she does not find the past nearly as interesting as her possible futures. Aminatou is quite aware of her own destiny but also knows it isn't time to enact it right now, so she wanders in search of new destinies to play with and forces to study in the meantime.

As a former little girl, I'm a firm believer in presenting them accurately—as unapologetic cosmic beings of immense metaphysical power.

Western popular culture at large has a very strict cookie-cutter for what little girls are supposed to be like: shy, emotional, delicate, and accommodating. Tropes serve an important purpose in that they inform us as an audience what to expect. But the danger of inverting assumptions is that occasionally you create tropes that are just as dangerous—pushback to mandatory girliness created the equally dangerous assumption that if a little girl doesn't refuse to wear skirts or be physical and boisterous, then they are not strong. How many times have we seen a freckle-faced fictional kid proudly boast on-screen "I'm not like other girls!" as she is rewarded for mocking her own peers? A primary goal when developing the character of Aminatou was to bend expectations much in the way that the character does. Aminatou's femininity is part of who she is—she is a little girl who happily wears dresses—but she is certainly not delicate or accommodating, nor is her design anachronistic or infantilizing. Femininity is an aspect of character, not a dictator of personality, and in modern fantasy (and especially in games), we as creators often fall into the trap of assuming that in order for a character to be powerful, they cannot also be feminine.

As for her home plane, I can't say much about it because it hasn't been defined quite yet, even on R&D's end. When the incredible Seb McKinnon was given the art description, it listed Aminatou's planar location as "not-setting-specific," which is basically code for "we haven't made their home plane yet." Kelly Digges was the art director for this piece (great work, Kelly!), and the result is the striking work of art we see on her card. We do know that Aminatou is not from Dominaria's Zhalfir (Zhalfirin clothing aesthetic is a mix of African materials with a Roman cut and design), but instead is from a firmly West African–inspired plane, one devoid of European costuming creep. We don't currently have plans to create a West African–inspired plane, but if there is enough fan response, I know I'd be the first to rally for us to hire a cultural consultant to help make Aminatou's home plane a reality.

Aminatou is in perfect control of her destiny, and although she is a child, knows that change is a part of being alive. Perhaps we can all learn a lesson from Aminatou and embrace her philosophy on life; the future is never set in stone.