A few years ago, I had the honor to join the talented folks here and embark on an ambitious but exhilarating project. We would be making the first set that would bypass Standard and be ported directly into the Modern format. Fast forward a few years later, and this time around for Modern Horizons 2, I joined teams for each part of the design process: vision, set, and final design. We learned a ton developing Modern Horizons, and it was great to take some of that experience and help make Modern Horizons 2 as awesome as possible!

One of the challenges that Modern Horizons didn't really have to tackle was how to handle lower-rarity mana fixing for Draft and Sealed Deck. However, for Modern Horizons 2, it was decided early on (some time during vision design) that the set would lean heavier into multicolor than its predecessor, so it would be important for players to be able to have access to an abundance of mana fixing.

With very few exceptions, the Modern Horizons sets have been about bringing brand-new content to the Modern format. They contain a mixture of new designs and reprints that were not previously legal in Modern. With these two options available, we began by exploring Magic's history for the most interesting possibilities that would be exciting, allow players to draft multiple colors, and ultimately feel like they belonged in Modern.

By the end of vision design, the team had scoured the Multiverse for suitable options to accomplish the above goals and had decided on including the Mirage "slow fetch lands."

These would have certainly been new to Modern, but they had their own set of flaws. First, the cycle was incomplete, so would we finish it here? The second issue is that they were widely regarded as being overall weak on power level, even by Standard's standards. Would they feel out of place in a set where the bar for power was higher? Without specific lands that have basic land types, they are generally weaker than something like Evolving Wilds. Finally, we weren't sold on these being a very exciting option for either Limited or Constructed players to have access to. So, we decided to make something new.

We had briefly entertained a cycle of dual lands that entered the battlefield tapped but had two basic land types. While these felt like they accomplished most of what we were looking for, it was also the kind of design space that our Standard sets occasionally play around with. We wanted to do something that would feel Modern. What could we do here that the Standard sets would have a tough time pulling off?

As we had already begun fleshing out the ten-color pairs and what kind of archetypes they would embrace, the Jeskai wedge (white-blue, red-white, and blue-red) all used or cared about artifacts in different ways. White-blue took advantage of playing a high number of artifacts and used affinity to play some more expensive cards ahead of schedule. Red-white was more of an aggressive strategy that used modular to keep the pressure on the opponent even through removal. Blue-red ended up suffering an identity crisis, as it was difficult for it to feel different from the other two artifact-based color pairs, and it eventually became what you see today, delirium.

Due to the high amount of artifact synergy in the set, we decided to try out a cycle of new dual lands. But not just any dual landsARTIFACT DUAL LANDS!!!

We thought it would be an exciting and unique experience for players to use their lands, both for color fixing and as a resource in other synergistic ways. An artifact land kind of pays you twice for affinity, or you can sacrifice it to fuel your artifact costs, and a ton of other nifty stuff.

Buuut, we ran into a little snag. As three whole colors cared deeply about artifacts, we would be including a higher-than-normal count of artifact-targeting removal. Extra Shatter effects were sprinkled into the set to keep things balanced. However, this had the adverse effect of us essentially adding a bunch of Stone Rains to the set. During testing, players were getting their lands destroyed during the early turns of the game. Oh, nooo! It quickly became apparent that choosing to include these fancy new artifact dual lands in your draft deck was more of a liability than a benefit. Where would we go from here?

Sometimes the simplest solution is the best solution. If the main concern we had during testing was that the lands kept getting destroyed, what if theyjustcouldn'tbe? "I think we have a mechanic for that." 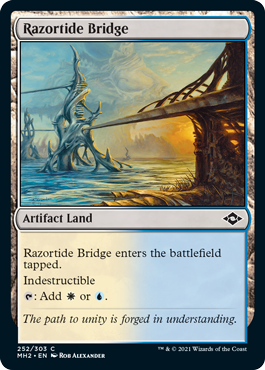 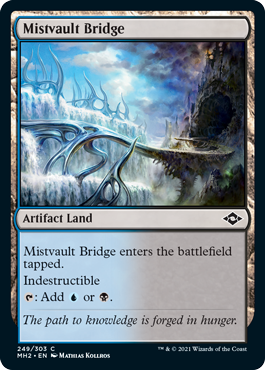 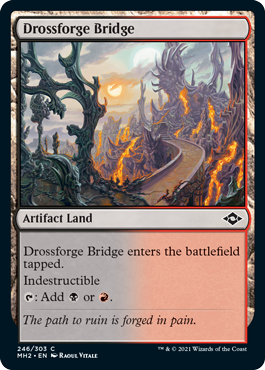 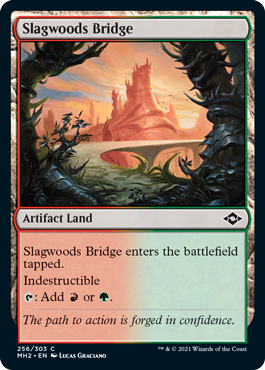 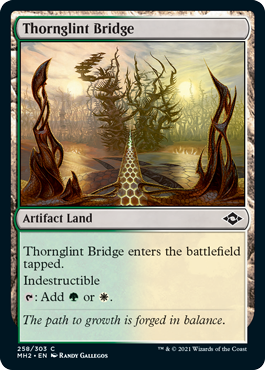 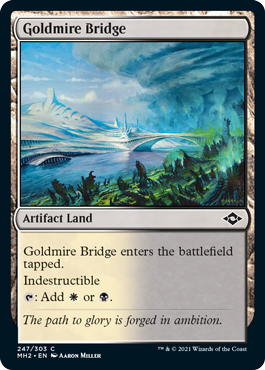 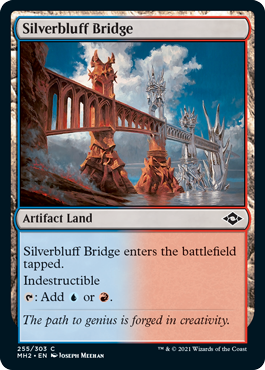 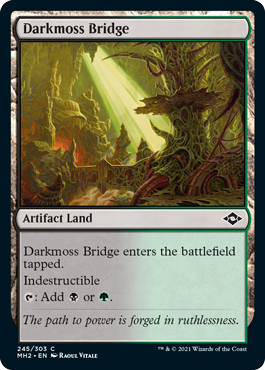 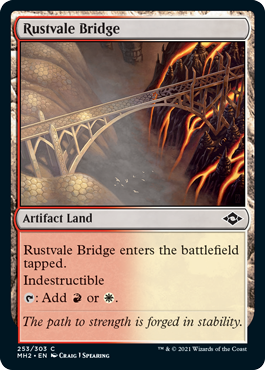 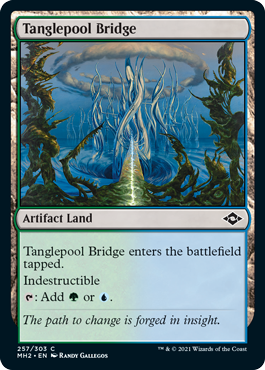 Sometime after the initial pitch to include artifact dual lands in the set, the Creative team wanted to show them on Mirrodin. Specifically, a Mirrodin before all the Phyrexians decided to make it their home. This became an awesome opportunity to show off some of the parts of Mirrodin before all of the corruption.

While we felt like we had come to a great spot for Limited, there were still some larger questions remaining: Should we include the entire ten-card cycle here? Would these be too powerful for Modern?

We've only done artifact lands once previously in the entirety of Magic's history. It seemed like it would be quite a long time before we ever had the opportunity to do these again. When would we visit Mirrodin again? Would these be at a reasonable power level for that possible future opportunity? Additionally, the Limited format really wanted to have all ten of these available for maximum awesomeness. After some discussion, it just made sense to include all ten.

While indestructible was the cleanest and simplest option to prevent the headache of getting these destroyed in Limited, it was not the only option we vetted. Hexproof was also considered, as that would have made these quite difficult to remove as well. While both serve similar purposes for Limited, indestructible was a much better fit for the Mirrodin concept. Not only was it an awesome conceptual fit, but it also opened a whole bevvy of interesting interactions for players to explore.

During our testing, we found that these would not be overly strong in competitive Modern, entering the battlefield tapped is just an extremely high cost. But that isn't to say we didn't find a bunch of nifty stuff these new indestructible artifact lands could do, and not just for fans of Modern!

I won't give away too much of the exploration—much of the fun of Magic is figuring out sweet interactions and building around them—but I'll leave you with a few highlights. 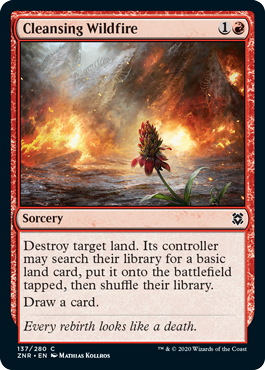 Cleansing Wildfire targeting your own Bridge lets you ramp for a basic land and draw a card for only two mana!

Similarly, you can turn the Boom half of Boom // Bust into a two-mana Stone Rain against Bridge-less opponents.

You can build your own basic fetch land by targeting a Bridge you control with your Ghost Quarter. 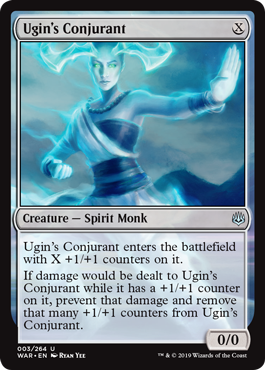 Celestial Kirin's trigger after casting an Ugin's Conjurant for zero with a bunch of Bridges in play will destroy all your opponent's non-Bridge lands while keeping your own.

I hope you all enjoyed the origin story of Magic's latest cycle of dual lands. It was a blast working through all the challenges along the journey that brought you these beautiful Bridges.