Words are something special in Magic.

Magic generates a lot of content—both visual and textual—but it's the words that make the game move. There are DailyMTG and Magic.gg articles about cards and players and everything in between, community conversations from around the world in languages beyond those Magic appears in, stories of characters and heroes and villains, worldbuilding documents and design collaboration behind the scenes every day. It all makes the game feel alive for players.

But card names are even more important words in Magic.

Writers of Magic card names have long-establish rules they follow when dreaming them up—though "guidelines" may be a better term—and they've been updated over time. For example, we don't repeat names we've used before, but we also avoid names that sound too similar to those previously used; we don't use names that conflict with a card type or creature type; and we skip names that are unpronounceable or far too obscure—we like to introduce players to words they may not be familiar with, but we don't want to be so esoteric that they feel condescended to or left out of the joke. (And playing on words is a favorite for flavor text and card name writers.)

Avoiding single words that have common, everyday uses is a rule that is rarely broken these days, and it's one that editors for the Magic site appreciate. Back in the beginning, there was quick use of one-word card names, like Terror and Jump. They seem great, and the flavor punch of the right word is worth the tradeoff for using such a simple one.

During a match, it's undeniably satisfying to slap down a card with a single-word name like Erase, Terminate, or Vindicate. They lend themselves to "verbing" so well: I Terminate your Tarmogoyf. What does the card do? It's summed up well right there in the name.

But what if that card doesn't hold up to the test of time? Terror is marvelously flavorful, but the requirements and effects are outdated and passé. Magic history is littered with these amazing names, but on cards that are less than exciting in most cases:

Though there are plenty of powerful ones that have stuck around:

These names, whether they delight you or not, come with a narrow problem that only editors for Magic websites would know: these are peculiar to manage in running text.

Ow. One-word names Complicate automation tools for adding markup and connecting card names to more information about them. Ponder, if you will, this paragraph. To be sure, it's a Curiosity we built to Illuminate this problem, but which of these examples Unmasks the Disorder these kinds of card names cause, and which are simply a good use of referring to a card? When do we Opt not to link them? When Magic does Disrupt a rule, it's because the word is perfect for the card and the set that it's in.

When that happens, arguments against using a new one-word card name Disappear, even if a few editors Despise the inconsistencies created when it comes up. 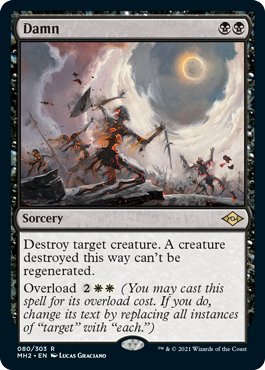 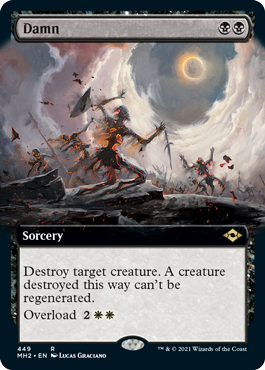 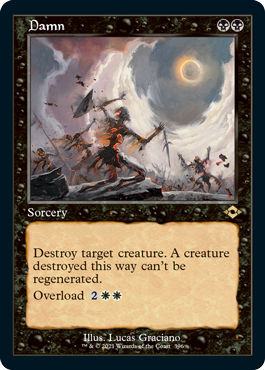 Damn isn't a word commonly quoted in Magic. While "damned" fortunately appears far more frequently, "damn" isn't as infrequent in Magic as you might think. It's in the flavor text for Admiral's Orders. It's in the second main story article for Strixhaven: School of Mages—three times in fact! It showed up in both "damn" and "damned" forms in the fifth Kaldheim story. And it appeared in the second entry of Dominaria's stories, but only once. (There are many instances where "damn" is an appropriate exclamation in stories!)

And trawling through the archives of competitive play leads to many, many, many instances of it being used as an exclamation or emphasis for a moment.

It's a good word, and we already use it in other forms in Magic card names:

Perhaps the best use of damn for a card name is Damnation, the powerful Modern card that famously came first in Planar Chaos.

Damnation was a colorshifted riff on Wrath of God, one of the iconic cards in Magic's initial Limited Edition Alpha release (and another Modern-legal card).

Casting Damn for its overload cost is effectively like casting Wrath of God. Altogether, the card is a nostalgic reference to where it began almost 30 years ago. As a player, it's appealing on multiple levels whether you appreciate the efficiency, flexibility, or flavor.

Modern Horizons 2 is a sweet set, and we're having a blast sharing it with you—we hope you found this to be a damn fun preview, too.