There are some cards you play no matter where you go—cards you shoehorn into decks even if they don't fit, or the metagame has passed them by. Cards you just can't let go. I have a few of those, but the one I will never abandon if I'm playing Grixis colors is, well, the ultimate thing to do with seven mana.

The original Ultimatum cycle had some powerful effects, but it was Cruel Ultimatum that left a lasting impression—on the game, on my opponents, even on professional Magic.

Of the five original Ultimatums, Violent Ultimatum saw a little play, and Titanic Ultimatum won many, many games of Limited, but Clarion and Brilliant Ultimatum ultimately didn't shine. The new ultimatums are far more on the Cruel and Violent end of the spectrum than the Clarion and Brilliant end, and the one I'm going to show you today is sure to end a lot of games the same way Cruel and Violent did—with your opponent totally devastated.

But this one takes just a bit of extra work. (And, full disclosure, is only my second favorite of the new Ultimatums.) 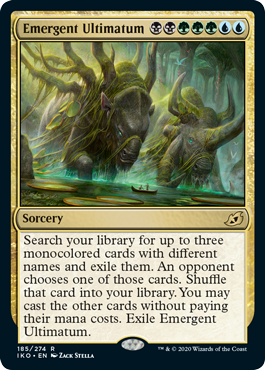 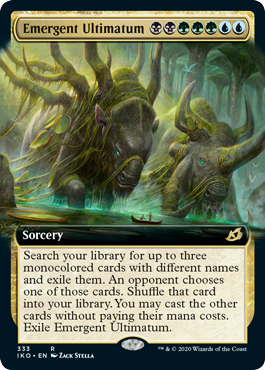 Part Gifts Ungiven, part Mind's Desire, part Demonic Tutor, Emergent Ultimatum, like those powerful predecessors, isn't the endgame in and of itself—but it might as well be.

The goal will be to give your opponents no good choices. For example, if you're playing a game of Commander, what in the world would they do about this pile?

Nothing fancy. No combos or attempts at messing with their head, just a simple choice of two Primordials and a busted nine-mana spell.

Or how about the "doing big things" Commander starter pack?

But what if we get a little tricky?

The key with a lot of these piles is going to be picking a one-card "win the game" card versus two cards that combo together. In this case, Enter the Infinite would draw your whole deck (which—if you can't win at that point, I can't help you), or Jace and Doubling season would combine to let you cast a spell out of everyone's deck—including that Enter the Infinite that just got shuffled back in. Thus, they have to give you Enter the Infinite, plus a bonus spell!

Commander is going to be the first place a lot of people look with this card, but it even has applications in Standard. For example, there's a Sultai-based elemental/Command the Dreadhorde list going around that churns out a ton of mana. What about a pile like this?

Or, if we want to get fancy, we play some cards that are just outside what the Sultai deck normally plays but could adopt.

That's without even leaving blue. The result, basically no matter what they pick, is that you get to steal some of their stuff.

And that's what I thought of after thumbing through a Commander deck and doing a quick search for the most expensive spells in Standard. Given this ultimate challenge—what piles would you make?