It's easy to look back at the original Innistrad release in 2011 to see where all these Vampires in Innistrad: Crimson Vow came from.

Dark Ascension, Avacyn Restored, and more built upon the vampire bloodlines and houses, expanding into a sprawling network of families and connections, spread across the plane and expanding their influence in every way imaginable. Cowing and controlling humans seems easy enough, and the wedding of Olivia Voldaren and Edgar Markov proves that holding power over fellow vampires is just as important an endeavor.

It's little surprise then that if it has blood, some vampire has taken a taste to find out what power it offers—and there are few powers on Innistrad greater than demons. Meet Henrika Domnathi: 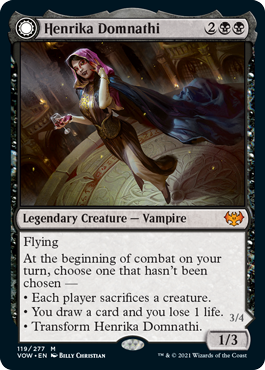 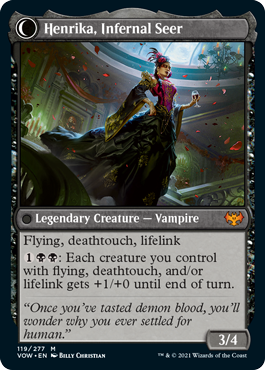 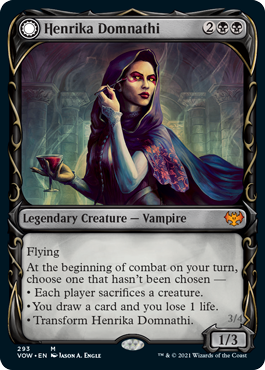 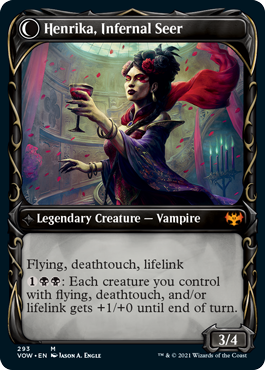 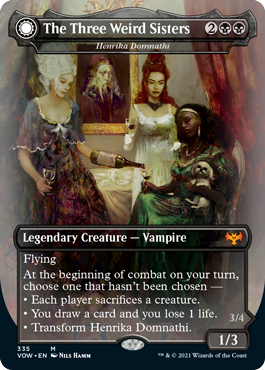 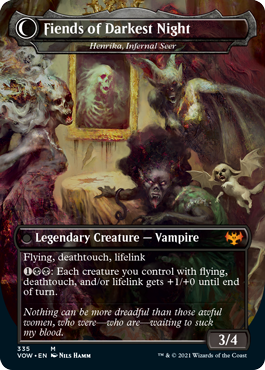 Henrika brings the best of vampires and demons together on Innistrad, albeit in a tidy Vampire-exclusive card. Up front, all of Henrika's beginning-of-combat choices are pretty good for you:

The transformation will happen eventually—like a Demonic Pact, you'll choose something you haven't yet each turn—but you might be interested in skipping straight to it. Henrika, Infernal Seeker doesn't offer you more choices but instead becomes the kind of Vampire that's sure to annoy your enemies.

Let's pause for a moment. Before Innistrad even debuted in 2011, there was another set with Vampires that was immensely popular—albeit for non-horror reasons: Zendikar.

One, though, took on a life of its own: Vampire Nighthawk.

It was a standout card in the Limited formats for Zendikar. It made appearances in Standard and went on to see reprint several times in Commander decks, Magic 2013, Modern Masters 2017, and more. It inspired twists and takes on its design, from the mirroring Kaladesh uncommon Aerial Responder to Zendikar Rising's supercharged version with Nighthawk Scavenger.

The transformed version of Henrika reads like another Vampire Nighthawk version but takes it to the conclusion of becoming a "lord" for all of them. Paying three mana to give creatures +1/+0 isn't necessarily a bargain on its own, but lifelink adds up quickly if you're racing through combat damage.

Where Henrika's demonic blood shines, though, is in how her ability works: it doesn't look for all of the abilities together as "Vampire Nighthawk tribal" but whether any of those abilities are on the creatures you control.

By herself, Henrika becomes "just a Vampire Nighthawk," which is solid enough to deter some would-be attackers and, perhaps, can be an expensive threat with enough mana. But in the right kind of Commander deck, she can provide the kind of late-game value few can plan around. Since her transformation is from an "at the beginning of combat" trigger, it's entirely reasonable to plan on drawing her, playing her, transforming her, then using her activated ability all in the same turn.

Your opponents won't get a turn cycle or upkeep to consider—Henrika hits combat and means business.

Any deck that plans to make piles of creatures with deathtouch, or flying, or lifelink and needs a little extra punch will appreciate having her around as a mana sink. Her ability seems restrictive at a glance, but the value of lifelink, deathtouch, and especially flying for tokens in Commander shouldn't be underestimated.

Henrika makes them all better—and gives you something else to do when you drop Urborg, Tomb of Yawgmoth and Cabal Coffers onto the battlefield alongside her.

Henrika Domnathi is legendary in her own right, but her greatest feature may be hiding somewhere else in your Commander deck to strike right when you need the power. She is a demonic deal you'll always be happy to take!