What do you do when you've been trained to fight for an organization but find their rules too rigid and their complete disregard for the individual at odds with your own personal moral compass?

You become a card in Kamigawa: Neon Dynasty of course! Introducing Isshin, Two Heavens as One: 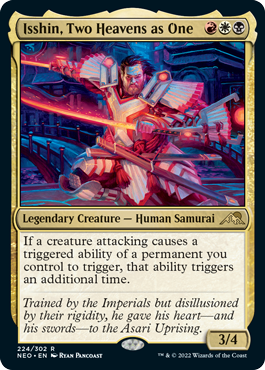 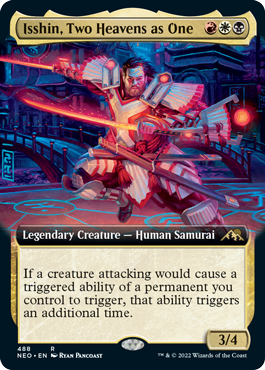 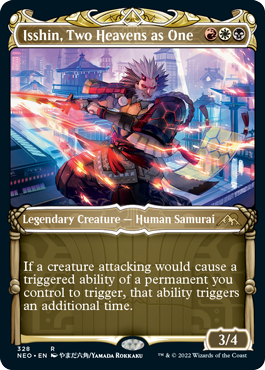 So, what's the deal with this guy? Well, while on the Vision Design team for Kamigawa: Neon Dynasty, we worked in tandem with the Creative team, and they created sweet characters poignant for story purposes that we would get to design something around. At the time, there was a central leader to the Asari Uprising we wanted to feature. And this card had a name, but no rules text. My main role on the Vision Design team was to be a firehose of top-down designs for the set. But for this card, I only submitted one design, and it survived all the way to paper, a rare treat!

Every card has an audience it's created for. In the past usually we focused mainly on Limited and Standard. But Magic is a lot of different things to a lot of different people now, so we have more target audiences to consider when making cards. The lens I normally design cards through is Commander first, and in that format, I really like doubling things. Adam Prosak even let me put the word "triple" on a card in one of my personal favorite designs: Fiery Emancipation. And Panharmonicon already had flicker strategies cornered in Commander. So, what's something else we can double?

The card in the file was Mardu aligned, so what's something red, white, and black aligned? Attacking! After thinking about this card for about 30 seconds, I figured a creature that doubled combat-damage triggers would be fun not only for me but for other people, too! Sometimes a card is just that easy to make.

But wait: I said double saboteur abilities, but the Isshin you all just met loves to double attack triggers. Remember that thing I said about making cards for all kinds of people? We have many different audiences internally, too. Magic Online, MTG Arena, and the printers where the cards get made all have different needs from us.

Combat damage–triggering abilities is somewhat tricky for our digital expressions of Magic, which need very specific rules to implement that we could otherwise handwave in paper. For example: would a creature with lifelink dealing combat damage to a player trigger your "whenever you gain life" effects twice? So, for this reason, Isshin moved from doubling combat damage to doubling attack-damage triggers. This made him somewhat close to Wulfgar of Icewind Dale, but he's different enough to be his own thing. So, let's break him down when looking at him from a Commander point of view.

I bet these two would get up to all kinds of crazy adventures.

Our hero is a three-mana 3/4. He's priced to move and will let you cast him basically always on turn three. Sometimes even turn two if you get the Sol Ring, mana rock draw, drawing the ire of the entire table. Having Restoration Angel stats means you get to employ some fun white-based removal:

He's a Human Samurai which gives us a couple of neat cards to think about. [Editor's Note: We removed a reference here that was not representational of this card's inspiration. This card was inspired by Miyamoto Musashi.] 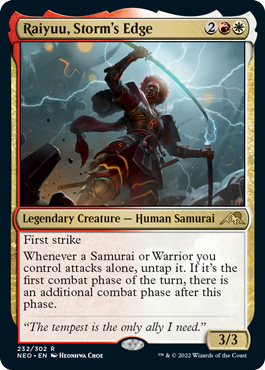 He's in Mardu colors, which gives us some fun cards to help us murderize our opponents—I mean, free them from the oppression that plagues them!

But let's get to the real meat and potatoes: Isshin's rules text. The type of sword fighting I practice in HEMA (Historical European Martial Arts) fencing uses only one sword, and most cultures have traditionally fought with only one weapon (and often a shield). Miyamoto Musashi created a two-sword style called nitōichi (二刀一, "two swords as one"), and Isshin here follows in his footsteps by inspiring all creatures to double your attack triggers! We can employ this feature in a few ways:

As you can see, there are a ton of directions in which you can take our favorite dual-wielding ronin. Many "spell-like effects" need to be on creatures, so you actually have ways to assemble the A+B combo of your commander and something that likes to attack. Here's a good place to start out, and you can modify this in numerous ways to make an Isshin of your very own!

Saya It Isn't So

So those are all the tales worth telling regarding Isshin. If you're interested in HEMA, you can check out my club's website here. And if you want to check out how a rules change can really modify an existing card, check out Reconnaissance, which is an absolute all-star in this deck.

As always, thank you for joining me in this journey. Learning how to be a better person, game designer, and swordsman are all things I strive for, and using that to give back some joy to my fellow Magic fans is one of my favorite things to do in this life. I hope Isshin, Two Heavens as One is as fun for you to play with as he is against, and I'll see you on the battlefield!