No, it's because we often get new twists on classic mechanics that give us a fresh eye on something we've been doing all along.

Take the green-white pairing in M21. +1/+1 counters has been used to represent growth, unity, and a whole host of themes that make green and white creatures work together to get swole. But one space they haven't spent a ton of time in, at least not in Selesnya colors, is +1/+1 tribal. Ya know, people helping people.

Or, in this case, people helping Hydras.

Let's start with our signpost uncommon. 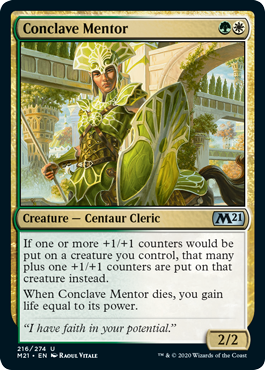 Above, I wasn't using Selesnya just to mean "the green-white color pair," though, I intended it that way, too. Instead, we have a literal Selesnya Conclave representative here to do a pretty good Winding Constrictor impression, minus a toughness but plus a little life gain in the end.

Signpost uncommons, if you aren't aware, are gold cards, usually two colors, that point you in the direction of what a color pair should be doing. In this case, green-white decks care about +1/+1 counters. Like the aforementioned "people." 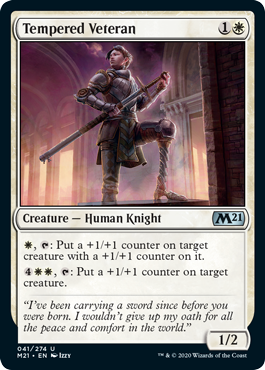 This is an uncommon that truly sings around other creatures with +1/+1 counters, pumping them further for just a single white. The second ability is pretty expensive, so it's better if you start out with some counters on other creatures, but it's still important to note the Veteran can get the +1/+1 party started if needed.

And, yes, a Conclave Mentor means the Tempered Veteran is pumping out two counters per activation.

But everything gets much better if creatures already have counters on them—like our new Hydra friend. 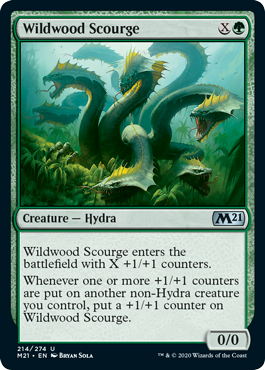 At its base, just being a creature that comes into the battlefield with +1/+1 counters is going to help the green-white archetype, but the second ability really drives home the synergy with other +1/+1 counters.

So far, we've looked at a number of uncommons which, while strong indicators, aren't going to be your bread and butter of setting up this archetype. No, for that, we need something a little more—boaring. 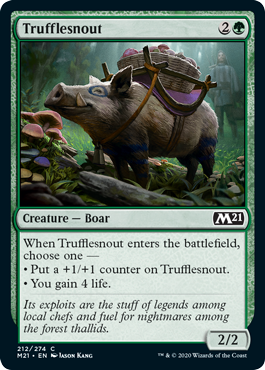 This seemingly innocent common is going to be the best part of your green-white starts and will frequently start attacking as a 4/4 or 5/5. Imagine starting on Conclave Mentor or Tempered Veteran and following up with this. Or having a Wildwood Scourge on the battlefield when you start pulling a number of these happy little boars.