Let's say, as a hypothetical here, you're one of several Planeswalkers working to mete out justice and defend the people of the Multiverse. And let's say you know there's a threat to a plane, like Dominaria, somewhere. How do you chase down leads, get to the battlefields in time, and gather allies from anywhere they are found?

You're going to need a ride.

When we returned to Dominaria in 2018, we followed the adventure of powerful Planeswalkers, yes, but also people from across the plane who stepped up to the challenge of recovering, rebuilding, and re-launching Magic's most iconic skyship: the Weatherlight.

The 2018 Magic story, "Return to Dominaria" by Martha Wells, introduces us to each Weatherlight crew member and takes us through the journey—from recovering the pieces to flying into the heart of danger to help rid the plane of the terrible demon.

All 12 episodes are online for you to enjoy:

Then, with our 2021 revisit for Dominaria United we picked up where we left off with the Weatherlight and its crew. This time, however, it wasn't the triumphant ending the heroes fought for and the Weatherlight was lost in the cruelest of ways to the Phyrexian threat.

This is the Weatherlight now. 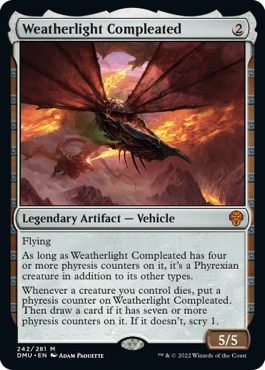 How did our shining beacon of adventure become an enemy to Dominaria itself, in Dominaria United no less? If you're not the type to read the story, we had Martha Wells fan (and DailyMTG writer) Clayton Kroh recap her "Return to Dominaria" serial plus the new Dominaria United story—together, which covers everything that's happened to the Weatherlight recently.

Previously on the Weatherlight

The legendary skyship Weatherlight lay sunken beneath the waves off the coast of Bogardan until the near-immortal hero Jhoira sought to recover it to aid in Dominaria's battle against the demon Belzenlok and his death cult, the Cabal. Jhoira succeeded in raising the remains of the mighty skyship and restoring it with the help of an elemental seed and the guardian angel Tiana. She assembled a new crew, among them the renown descendants of the Weatherlight's past crew, the warrior Shanna Sisay and mage Raff Capashen, as well as the reformed vampire Arvad the Cursed—oh, and the unassuming stowaway Slimefoot, a thallid from Yavimaya.

The Weatherlight joined with the Planeswalkers Gideon, Liliana, Jaya, and Chandra to strike at the heart of the Cabal by killing the Demonlord Belzenlok on Urborg—and also hoping to free Liliana from her pact with the demon. There, Gideon and Chandra infiltrated the demon's Stronghold while Liliana's undead hoard attacked Belzenlok's Stronghold to draw out the cult's forces. The Weatherlight breached the fortress defenses, and Gideon, Liliana, and Chandra defeated Belzenlok with the aid of the Blackblade, a soul-drinking weapon of darkness.

The battle won, the Planeswalkers departed to face the nefarious Elder Dragon and Planeswalker Nicol Bolas, while Jhoira and the Weatherlight crew set off to continue rid Dominaria of the remnants of the Cabal. Jhoira later turned over command of the Weatherlight to its rightful owner, Shanna Sisay, and returned to her workshop on the Mana Rig.

Ultimately, the Planeswalker allies were successful in defeating Nicol Bolas though not without the loss of Gideon and many more—Planeswalkers and the citizens of Ravnica—in the final battle against the Elder Dragon.

Now we come to the story in Dominaria United. Karn returned to Dominaria to investigate his suspicions that Phyrexians had somehow returned to the plane. He became trapped in the collapse of the Caves of Koilos after discovering that Phyrexians, led by Sheoldred, indeed had escaped their imprisonment, and were now plotting to subjugate the entire plane.

Karn was rescued by Ajani, and the two traveled to a peace summit between the Keldons and New Benalia to warn the leaders of the Phyrexian threat. At first, they met with some disbelief from the Archmage Jodah, but when they were attacked by Phryexian double agents, Jodah's resistance quickly dissolved and he joined up with Ajani, Karn, Teferi, and Jaya. Cornered by the Phyrexian creatures in a locked-down tower, Karn used a summoning pendant to ask the Weatherlight for help. Shanna immediately heeded the call.

Once onboard the skyship, they hatched a plan to recruit allies, including Danitha Capashen, the dragons of Shiv, and the elves of Yavimaya. Karn and Teferi traveled ahead to the Mana Rig to await the Weatherlight and prepare for a showdown with the Phyrexians.

While traveling to the Mana Rig, however, the Weatherlight was grounded during an attack by a skeletal dragon. Raff sensed a strong magic near their crash site, something that could assist Tiana in repairing the skyship. Who they discovered was the dementia caster known as Braids, who set them to a task of defeating a shard version of herself in exchange for her assistance. Successfully defeating the Shard-Braids, they gathered the needed parts and returned to the Weatherlight.

Only, the Weatherlight was not as they had left it. A Phyrexian infection that had slipped aboard took over in their absence, and the Weatherlight and crew had been compleated. Shanna and Tiana managed to liberate the skyship's powerstone while also rescuing the thallid Slimefoot. They leapt from the Phyrexianized horror that was once their beloved ship and watched as the corrupted Weatherlight flew off.

The Mana Rig had been under intense assault by Phyrexian forces led by Sheoldred when the compleated Weatherlight arrived on the scene, making a bad situation worse. Now captained by a revivified and compleated Ertai, the Weatherlight joined the battle against the allies. The allies were losing the battle and decided to get the Sylex to safety.

But Ajani was revealed as a sleeper agent, who threw Jaya from the Mana Rig to her death. He seized Karn and destroyed the Sylex while Sheoldred used a Planar Bridge to abscond with both Karn and Ajani.

The loss of the Weatherlight and scattering of the crew is a devastating win for the forces of New Phyrexia—but let's not dwell on that.

I prefer to recall the reborn Weatherlight as it was during its heyday in flight across Dominaria. The entire plane was the "domain" of the crew, and the awesome sight of her in the sky could only be rivaled by the view you would have if you were lucky enough to be aboard. 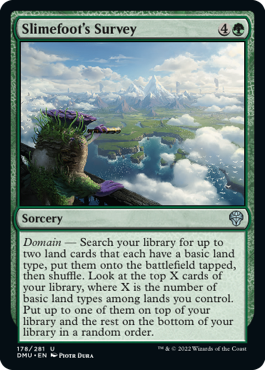 Every member of the Weatherlight crew has their fans, but only one captured my enduring interest, imagination, and gameplay: Slimefoot.

One of my favorite story moments from Return to Dominaria was when Slimefoot really did save the day—and the Weatherlight—by calling up the help of Muldrotha to flight off Yargle.

That the grumpy cabin-dweller often motivated by food could rise to the challenge and save their crewmates and skyship home was the hook that caught me. It helped that the card design made it one I loved playing with.

I tend to talk about Slimefoot, and my Slimefoot deck, a lot.

I don't know who put Slimefoot onto the #MTGTimeSpiral bonus sheet, but I do know I'm going to be thrilled to swap it for the #MTGDOM version I use for Commander. #WOTCstaff pic.twitter.com/vGb6XcnFBk

This is 100% not an actual lore thing, but I'm in love with the idea of Slimefoot and Dina going on a date in Yavimaya.

There was even a time I jumped to fill in as Slimefoot for a live, one-shot Dungeons & Dragons story themed as the Weatherlight crew.

Get at me if you want the file tonight! Otherwise, the info is in your emails. DM the DM if you need something! #gpvegas

It was an interesting adventure where Slimefoot certainly made its mark.

While Slimefoot's Survey is a card that isn't destined for my Slimefoot Commander deck, it is exactly the kind of card that helps bring five-color decks to life. I'd suggest swapping it into the Dominaria United Painbow Commander Deck if you find getting more lands—and digging to find something powerful to cast with them—is helpful for you.

What is a likely addition to my favorite Commander deck is Weatherlight Completed as a two mana way to repeatedly scry—then draw—cards without spending any extra mana: exactly the kind of effect my deck can use.

What would you change to make room for Slimefoot's old home?