Ever since I was a kid, I've loved Un- sets. I have vivid memories of guessing correctly on Six-y Beast, or the first time I read Stone-Cold Basilisk. My local game store always had a box of Unhinged on the shelf, and it was our tradition to crack a pack every time one of us won a Friday Night Magic.

Despite my passion for Un- sets, I was not at all prepared for how large a role silver-bordered cards would play in my first year as a designer. The first project I ever worked on at Wizards was Ponies: The Galloping, our silver-bordered Extra Life charity set. Then later that year, I would play a huge role in designing the new cards and decklists for Unsanctioned, our silver-bordered box set. So, when it came time to start the fourth Un- set, Mark Rosewater asked me to be his strong second. 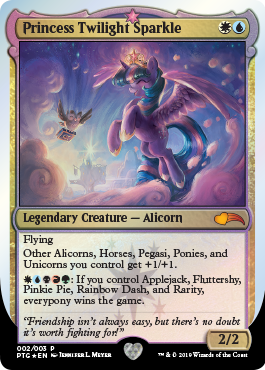 Working with Mark on an Un- set was a lifelong dream come true, and what's more is that I ended up staying on the project the entire time, from exploratory design all the way through the end of set design. There's no other set I've worked on as long or as closely as I did Unfinity, and for that reason, it will always hold a special place in my heart.

Now without further ado, let's look at some preview cards!

Stickers were something we knew would be in the set from day one, and we spent a lot of time experimenting with different ways of using them. Below you can see a few playtest cards from early in design exploring different ways for art stickers to be used. 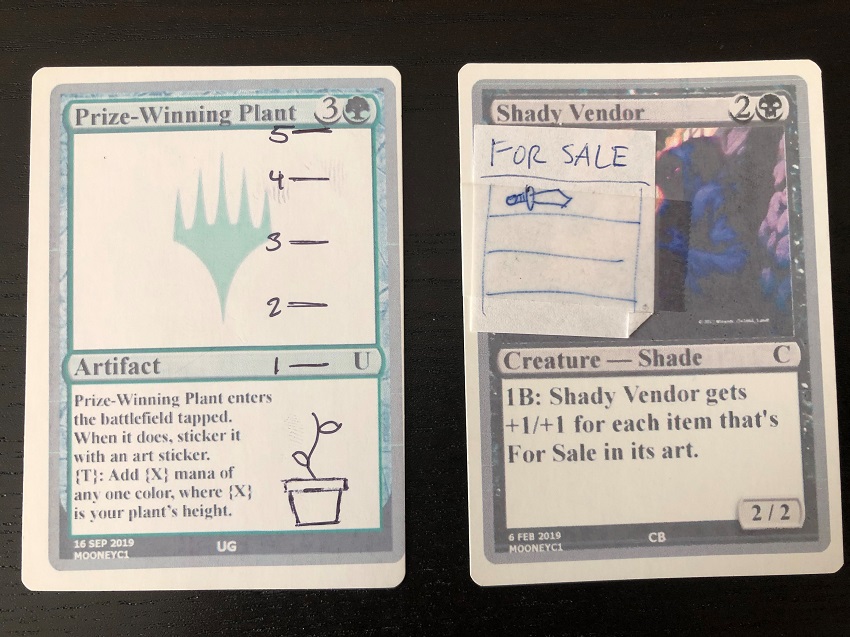 Art and name stickers were a lot of fun to play. They created silly moments and allowed players to get creative and make their own jokes, but the more impactful, mechanically relevant stickers were the ability and power/toughness stickers, which allowed you to permanently alter a creature. In order to properly balance these stickers, we created tickets, a new resource that you spend to buy more powerful stickers.

Managing your tickets is a big part of the strategy in Unfinity Limited. Whenever you place a sticker, you can choose to spend your tickets on a cheap sticker or save up to buy a stronger sticker in the future. It's important to remember that name and art stickers are free to place, so you'll always get to add something to your cards even if you choose to save tickets for later in the game. 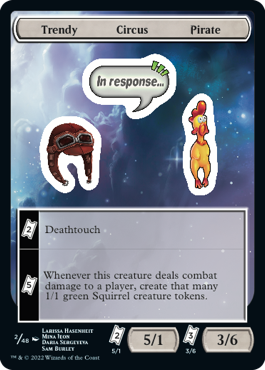 Many cards in the set sticker something only once. However, a few cards allow you to place multiple stickers, like my first preview card Bioluminary. Each time you connect with Bioluminary, you'll get two tickets and the chance to place a sticker, which can add up to quite a lot of value and choices over a long game. For example, using the sticker sheet above, you could give Bioluminary deathtouch to make it a costly creature to block. Or if you've already found a way to give it evasion, you could turn it into a 5/1 to really start putting pressure on your opponent. And if you've saved up tickets from previous turns, you could start creating a Squirrel army as reinforcements! In Unfinity Draft, you'll have three sticker sheets to choose from, which means a lot of options to consider over the course of the game.

One of the unique aspects of stickers is that they, well, stick! Your stickers will remain on your cards as they move from the battlefield to your graveyard or exile. This means you must be careful about where you decide to place your most powerful stickers, since you won't be able to reuse them until the next game. 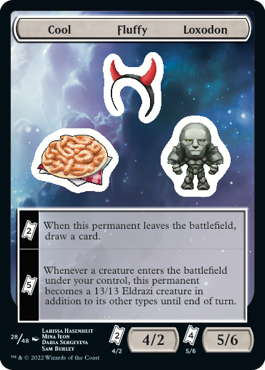 However, a few cards take advantage of this stickiness, such as my second preview card Scampire! This sanguine swindler is the only card in the set that allows you to sticker something in your graveyard, but its real power is in its activated ability that lets you "unearth" any stickered creature. If you've got a Scampire in your deck, you should think about spreading out your stickers earlier in the game to have the most available options for reanimating later. It can be especially powerful with strong enters-the-battlefield effects, such as the many creatures that place stickers or open attractions.

Scampire can also create some powerful interactions with specific stickers. For example, the sticker sheet shown above has two ability stickers that synergize with Scampire. The first draws you a card when the stickered creature leaves the battlefield, which means returning it with Scampire will allow you to draw another card. Even more exciting is the five-ticket sticker that allows your creature to become an Eldrazi. Usually triggering this powerful ability requires another creature to enter the battlefield, but with Scampire, the creature will trigger its own ability and be able to attack immediately as a 13/13 with haste! Additionally, if you can find a way to sacrifice your Scampire-d creature before it gets exiled on your end step, you'll be able to do it all over again next turn.

Stickers allow for tons of creativity, so keep an eye out for cool interactions. Given how many possible combinations of sticker sheets exist, you might discover a combination of abilities that literally no one else in the world has ever used before!

My last two preview cards will give you some insight into Unfinity Draft. As with many modern sets, Unfinity features ten gold uncommons that help to guide you toward certain strategies (which we call signposts). As you can probably guess, the two signposts I have for you today both involve stickers.

In Unfinity Limited, green is the color of "big tickets." Green has slightly more cards that give tickets, and more often gives you more tickets at a time than other colors. As a result, green is the color most likely to buy the more expensive ability and power/toughness stickers. Two of green's Limited archetypes are designed to reward you for going deep into tickets.

First up is the dynamic duo Tusk & Whiskers, a pipsqueak-plus-pachyderm pair of promising performers prepared to power-up their peers with propitious prizes (+1/+1 counters to be precise!). Green-white in Unfinity rewards you for using ability stickers, and Tusk & Whiskers are a reliable sticker and ticket engine in the late game that allows you to spend any saved tickets on powerful abilities that come with a size boost to boot. If you draft green-white, pay close attention to what ability stickers are on your sticker sheets, and look for creatures that synergize well with them.

And last but certainly not least is the distinguished Ambassador Blorpityblorpboop! Ambassador B. speaks on behalf of the stranded aliens who now call the Astrotorium home, but this little green friend can pack a BIG punch with the right support. Blue-green in Unfinity rewards you for using power/toughness stickers, and Ambassador B. can serve as a powerful way to finish games. If you draft blue-green, look for creatures that would be powered up by receiving a size boost, such as smaller creatures with flying or trample.

I hope you will enjoy playing with Unfinity as much as I enjoyed making it! I can't wait to see all the creative, silly, and unexpected things you do with stickers. Send me your favorites on Twitter at @ChrisKMooney. And for anyone planning to play Unfinity at Magic 30, I look forward to seeing you there!