As a control player, I love seeing those words printed on a Magic: The Gathering card. Mass creature removal has been a staple of the game since its earliest days and plays a major role in every way to play the game that exists. They're a powerhouse in Limited, a vital tool for competitive Constructed formats, and a way to hit the reset button in Commander. Having access to mass creature removal on your own terms is a huge advantage, and the effect is an auto-include in any control deck worth its salt (in your opponent's tears).

Even when I'm on the receiving end of a board clear, I have to admire the simplicity of the design and the sense of balance that it offers Magic as a whole. "Destroy all creatures" is a phrase that's opened up strategic avenues that have been an inherent part of Magic from its inception and give creature enthusiasts a reason to get very, very nervous.

In recent years, this effect usually has conditions attached. Cards like Shatter the Sky, which made a showing in Magic World Championship XVI, gave players like eventual champion Paulo Vitor Damo da Rosa access to the effect for a mere 2WW (a bargain compared to the five mana of cards like Time Wipe and the Cast Off half of Realm-Cloaked Giant) but potentially allowed opponents to draw a card as a result. Kaya's Wrath from Ravnica Allegiance is another example of a board clear that made a splash at the time, again with a converted mana cost of 4 mana.

It's understandable that the mass creature removal seeing the most play is traditionally at four mana. After all, it's the sweet spot for a very good reason. Magic's first set ever established a pretty strong precedent that other cards can only hope to live up to.

That brings us to this special addition to Double Masters. It's the progenitor of mass creature removal and the reason why this effect is known in Magic simply as a "wrath." 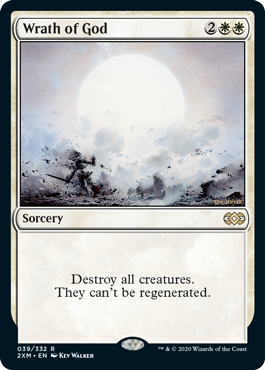 Wrath of God originally debuted in Limited Edition Alpha and has appeared numerous times throughout Magic's history. It's so iconic that "wrath"—technically a noun—has gone beyond Magic to become a tabletop game shorthand verb for getting rid of everything in play. A part of Magic history, Wrath of God was included in every core set through Tenth Edition. And the original mass-removal spell is back with its now-iconic art from Kev Walker, which first appeared in Seventh Edition.

From my experience casting this spell in Limited (mostly Cube—my apologies for the many times I ruined my opponent's plans in Cube by resolving exactly this card), this is a card you're going to want to take highly in Double Masters Limited. It's a powerhouse in every Limited format it's graced, so if your opponent is in white, be careful not to overextend your board.

But this is Double Masters! It's twice the fun, twice the previews—and in this case—twice the same card!. 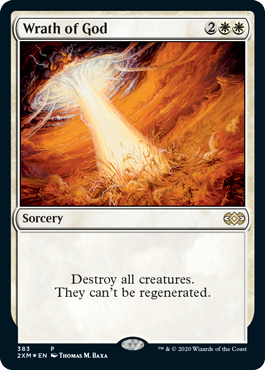 That's right, a Launch promo version of Wrath of God with all-new art by Thomas M. Baxa. This promo will not be available in packs. You'll be able to pick one up by either buying a box of Double Masters or by playing in a Launch event (all while supplies last—note that some stores may not be able to have Launch events due to COVID-related regulations and safety, so check with your local store for more details).

In closing, my feelings on Wraths can be summarized by this completely real quote.

"It is a truth universally acknowledged that an opponent in a game of Magic: The Gathering in possession of a good fortune of creatures, must be in want of a Wrath." – Jane Austen, probably