"Sing to me of the man, Muse, the man of twists and turns driven time and again off course"

Let me tell you a little secret about Magic design: It's a bloodbath. So many promising young cards are designed, only to be cut down in their prime, removed from the set, or never even added to it, because they aren't quite right. Sometimes these cards have been polished and iterated upon for months before they're callously discarded. It's a dirty business, not for the faint of heart, and it requires everyone involved to set aside their egos in the service of the set and the game as a whole. This can even happen with whole mechanics. Lots of mechanics are playtested a couple of times and simply aren't fun enough to make it into the game. Other mechanics are perfectly good in their own right but are redundant on some axis with the other mechanics in the set. Every mechanic comes with costs, large or small, and sometimes those costs outweigh the benefits that the mechanic has to offer. In this article, I'll tell the tale of a mechanic that didn't quite make it, and of a card that was given a second chance.

"The ready-voiced daughters of Zeusbreathed into me a divine voice to celebrate things that shall be, and things that were aforetime."

Theros Beyond Death isn't the first expansion set on Theros. I was on the design teams for all three of the sets in the original Theros block, and I lead the design of Journey into Nyx, the third set. In those sets, we married the creative theme of Greek mythology with the mechanical theme of enchantments. The sets were replete with top-down designs that alluded to famous Greek myths

packed with gods, heroes, and monsters

We consciously held back references to the Underworld, the realm of the dead in Greek mythology. We didn't avoid it entirely, but we tried to save something for "The Inevitable Sequel."

Meanwhile, in the associated e-books, Godsend and Journey into Nyx, both by Jenna Helland, the Planeswalker Elspeth was betrayed by Heliod, the god of the sun. Heliod slew Elspeth and consigned her to the Underworld. Of course, anyone who has read Greek mythology knows that security in the Underworld is a bitlax. People like Orpheus, Odysseus, and Persephone were constantly coming and going. I'm pretty sure that Cerberus was guarding a revolving door

"You cannot step twice into the same river"

—Heraclitus, as quoted in Plato's Cratylus

We'd set ourselves up well to have something new to do when we began designing Theros Beyond Death. We had a largely unseen land with a good potential for resonant card concepts and a major character who had been imprisoned in the Underworld. Our Planeswalkers are intended to be aspirational characters, so Elspeth couldn't sit around and wait to be rescued; she'd have to organize a jailbreak from the Underworld.

We wanted to recapture the look and feel of the original Theros block but also move the camera back a bit, so the Underworld was in the shot. That implied a pretty conservative approach overall, with a new element. We discussed all the previous mechanics from Theros block, along with various ideas for new mechanics. We settled on using enchantment creatures, devotion, and constellation, as well as bringing back the Saga mechanic from Dominaria. Sagas, with their storytelling vibe and their enchantment card type, felt perfect for Theros. We knew that we needed a new mechanic, too, and it made sense for it to connect thematically to the Underworld, our new creative element, in some way.

In mythology, the river Styx forms the boundary between Earth and the Underworld. The Styx featured so prominently in Greek myths that it even has its own adjective: Stygian. Theros has its own Styx analogue: The Rivers That Ring the World. The most promising idea that shook out of the exploratory design process was a mechanic that divided the battlefield with a river. We called this mechanic Stygian.

Of course, Magic's ancient past already includes something along these lines—Raging River from Alpha!

I mocked up some token cards with a section of river running down them. The images were arranged so that any Stygian token would connect properly to any other Stygian token. It was pretty fun to set up the river and deploy your creatures to either the living side or the dead side. The gameplay was very intuitive; it was easy to instantly grasp which creatures could block which other creatures.

We figured that implementing Stygian on MTG Arena would be a snap, as we'd seen many digital trading card games with this sort of lane combat before. There were, however, problems in paper Magic in multiplayer games. There wasn't a clean way to separate the table into two halves in a way that was convenient for a four- to five-player Commander game, for instance.

In Limited and Constructed two-player games, Stygian made blocking approximately twice as difficult. Functionally, it was similar to each player having a copy of Goblin War Drums on the battlefield.

Stygian was beneficial when you were ahead or at parity, and harmful when you were behind. The set would require more "catch up" cards than usual to help compensate for this tendency. Strong removal spells, good defensive creatures, and other strong reactive cards would help prevent games with the river from snowballing.

We found that the river wasn't very interesting in the early game, at least in Limited. We limited the Stygian mechanic to creatures with converted mana cost 3 or higher for that reason.

After the handoff to Set Design, more issues with Stygian cropped up. The Play Design group had some concerns that Stygian might make aggro decks too powerful. Also, the digital implementation wasn't nearly as much of a slam dunk as we'd initially assumed. Because Magic doesn't cap the number of permanents that can be on the battlefield, it would be well within the realm of possibility that a player would have many creatures on one side of the river and none on the other. In order to fit the creatures on half of the screen, they'd have to shrink down to a tiny size. The Arena folks mocked up a dynamic river that zigzagged down the screen, which was okay, but not quite what anyone had originally hoped for. (We've since adjusted our process to loop in Arena's user interface designers earlier in the process of designing Magic expansions.)

All these small problems finally tipped the scales toward "maybe we should find a different underworld mechanic." The set designers tried lots of different things, finally arriving at the escape mechanic that you see in the final set.

So, you see, the Stygian mechanic didn't have a single point of failure but rather a series of minor costs that added up to being too much to justify the mechanic's inclusion. While the mechanic itself didn't have a single point of failure, it created a weak point in the set's overall design. We'd set ourselves up for trouble by spending most of the vision design period iterating on a single novel element that the set needed to have succeed.

There is, I think, a couple of lessons here. Any design element you add to a game comes at a cost, even if that's only an opportunity cost. Don't get so attached to the work that you've done on that element that you stop assessing the cost of it, and don't spend too much time iterating on something at the expense of exploring other options. Having a single, yet vital, weak point for any design can be fatal!

"But what does this have to do with the preview card I've read this article to see?" you might ask? Today's preview card has a convoluted connection to the River Styx that will become clear.

"Whom else did a Nereid take by stealth through the Stygian waters and make his fair limbs impenetrable to steel?"

While we were designing the original Theros block, we made lots of top-down designs based on ancient Greek heroes. There was Leonidas and Gorgo:

And there was Bellerophon:

But there was one card that was too weird to see print, and that was our Achilles.

Achilles, so the story goes, was the son of the Nereid Thetus, and of the mortal King Peleus. In the literary canon, he is mostly known from Homer's epic poems, where he comes across as the angriest man of all time. But the detail of Achilles's biography that most resonates with modern audiences comes not from Homer but from the later Latin poet Statius, who writes that Thetis held her infant son by the ankle and dipped him into the waters of the river Styx, rendering him invulnerable to harm.

That heel by which she held him remained untouched by the divine waters, and there Paris's arrow struck him later in life and killed him. Even today, someone's "Achilles heel" is their one weak point, and the tendon on the back of the foot is named after Achilles.

So, back during Theros block, we (I think I designed it, but I may have forgotten the original contributor who came up with the idea in the intervening seven years) designed this card, last seen in the Journey into Nyx handoff from design to development.

Achilles didn't make it through the burning crucible of development (and that's a whole 'nother allusion!), but he was not forgotten. Ian Duke independently designed a similar card for Theros Beyond Death. His version revealed cards from your library until it revealed a spell and used the converted mana cost of that card to determine Achilles's weak point. The card went through various twists and turns (perhaps you'll hear about it in an M-Files column) and lots and lots of playtesting. Behold the finished product! Or at least a digital image thereof! 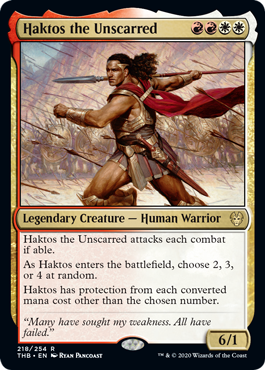 The single point of toughness and the "must attack" text ensures that his single weak point is very weak indeed, and the random converted mana cost selection ensures that your opponents can't simply metagame mighty Haktos into oblivion.

I hope you enjoy the Theros Beyond Death Prerelease!