acking for Berlin is becoming increasingly difficult as players, judges, and staff are all making plans to enhance the event that requires specific gear. A couple of weeks ago I reported on Raph Levy's Hall of Fame efforts to posh up the Pro Tour by suiting up the field; I have to pack night vision goggles if I want to appreciate the plating at our coverage dinner; and now a good pair of sneakers is needed if I want to hang out with the judges—and hopefully some players—on Thursday before the event registration begins.

Hector Fuentes is a Level 3 judge hailing from Coyoacan, Mexico. He is heading to Berlin to be a part of the judge team – in the tournament and on the pitch. The 23-year-old, who is a student of politics in Mexico City, is organizing a Judge Soccer game on Thursday for the judges—and for any players that want to test their foot skills against the people who normally adjudicate their matches.

"Don't forget to bring your sports pants and sport shoes!" suggested Hector as he explained, "On Thursday the 30th some judges are planning to have a soccer/football match in Berlin before the Pro Tour Registration. We also would like to throw the challenge to the players attending the Pro Tour. We're meeting at 12:00 in front of the site and will take the subway to the field. If you are not at the site, you can also meet us at 12:30 at U Heidelberger Platz subway station. Please wait at the platform level, near the southern exit of Johannisberger Str."

Hector, who became a judge when he could not find the cards he needed to play in an Invasion Block tournament, first got into Magic after a hobby store opened up right across the street from where he was living circa Urza's Saga. After all these years he still enjoys playing the game and pointed out that: "This year after four years of judging Nationals I decided to play in it. I really like Booster Draft and enjoyed Standard."

Most of his time spent with the game is judging though and at a recent gathering of judges the group played some futbol and decided to make it a more regular happening.

"The idea came in Grand Prix–Buenos Aires where we had the first Latin American judge conference," Hector recalled. "Staying in Buenos Aires and not talking or playing futbol may be a sin for the locals. That's why they organized a friendly game."

Pick-up basketball games have long been a Pro Tour staple and that seems to be the organizational model being implemented for Berlin's kick-off event.

"The plan is see how many players attend at the site and form teams over there," he said, explaining that he hoped it could become an informal tournament with quick simple games. "The first team to get three goals wins and then they play against the next one. We're gonna be playing in teams of five or seven. I hope every player finds a team to play with. I really like this because it lets some new players on the Pro Tour meet new people—one of the great things about the game!"

Catching up with Gavin 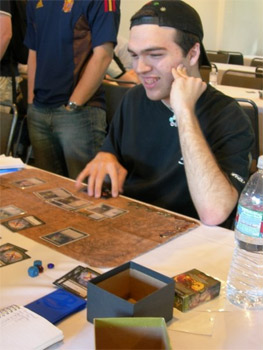 For most players outside of the Ohio sphere of influence, last weekend was the first opportunity to play in a PTQ for Kyoto. Among those players was Gavin Verhey, who is one of four players we will be following throughout this season as they attempt to secure an invite and airfare to Japan.

BDM: Did you play in a PTQ this weekend? Where and how many players?

Gavin: Yes, I did. It was in Vancouver, Canada and there were 134 players.

BDM: How did it go for you? Anyone from your playgroup do well?

Gavin: It went extremely poorly for me. I opened what I thought was a pretty good pool, won round one handily, felt pretty confident, then didn't win another game. Some locals I know and play with, Peter Beckfield and Eric Reasoner, made Top 8 but didn't win.

However, outside of my PTQ, several teammates did well. Kenny Mayer won in Roanoke, beating Justin LaRose in the finals—both teammates of mine. Across the pond, teammates such as Lucas Florent made Top 8 in European PTQ's.

BDM: Do you happen to have access to your card pool/decklist from the weekend?

1 Gift of the Gargantuan 1 Infest

I would cut the Elvish Visionary if I rebuilt the deck, and maybe try to make Violent Ultimatum fit in—I sideboarded it in along with a Mountain for slow matchups—but otherwise I am still very happy with the deck. What would you do? There were a lot of ways I could build this deck; the two Tidehollow Scullers and the Blightning were particularly tempting. Let me know in the forums, I'll be reading!

BDM: Were there any assumptions you had made about the format going in that were changed by the PTQ?

Gavin: I think that the Sealed Deck format does have a place for an aggressive deck, and if you can get it, play it. I saw a deck with multiple Wild Nacatls playing with the oft-maligned-in-this-format Cyclian Elf, and while the creatures did get outclassed, the deck was capable of many highly aggressive draws that were able to tempo out a lot of their opponents. That said, I don't think decks like that will appear very often. I still believe that most of the time you can expect wars waged between each other's 5/5s.

BDM: I am getting the sense that sideboarding is even more important in this Sealed format than any other before it. I have heard stories about people dramatically switching builds between beatdown and control based on their opponent's build.

Gavin: I don't know about more important in this Sealed format than any other, but I do agree that sideboarding in Limited is an extremely underused tactic. Many players never even look at their sideboards in a Limited match, but there are often cards to bring in. Kenji once said in an article that he sideboarded in almost every Limited match, and I think there's a lot of value in that statement. Sure, there's the obvious Naturalize against the Esper decks, but there's also strategies like bringing in creatures that wouldn't usually make the cut to stem the tide against quick beatdown decks or cutting some of your early game protection for more late game cards against an opponent with few early drops. Try to always look at your sideboard, you'll be amazed at what you find.

BDM: Will you be playing in the GP this weekend?

Gavin: I will not, unfortunately.

Firestarter: Over and Underrated cards in Shards Limited

In the course of catching up on how people did this week, Gavin asked the other guys which Shards of Alara cards they thought were better than advance billing in Limited and which ones did not live up to the hype. Sam Stoddard replied:

"Underrated: Bone Splinters. This card is an absolute house in this format due to both the all-in devour creatures and mythic rares like Hellkite Overlord who are nigh unkillable pretty much every other way. This format is often about ramping up to bombs and Bone Splinters is a great way to deal with them.

"Overrated: Infest. People remember this very fondly from Onslaught Block when everything was a 2/2. It's definitely not a bad card here, but it's not the Wrath of God that people seem to think it is."

What about everyone else who has been playing in the PTQ season so far? What unexpected cards will be in the Sealed pools that rise to the top of the fields in Kansas City and Paris this weekend? What cards will you be surprised to see sitting in the best players' sideboards? Head to the forums and share your opinions—and feel free to rework Gavin's deck if you have any suggestions!