With the release of Zendikar Rising comes the debut of the Set Booster. Some of you may pick up one of these boosters and be totally at a loss. Open a pack without drafting it? Heresy! Well, lucky for you, we've gathered up some Magic minigames for you to play with your packs and a friend or two, and you can find these minigames in the Set Boosters themselves! 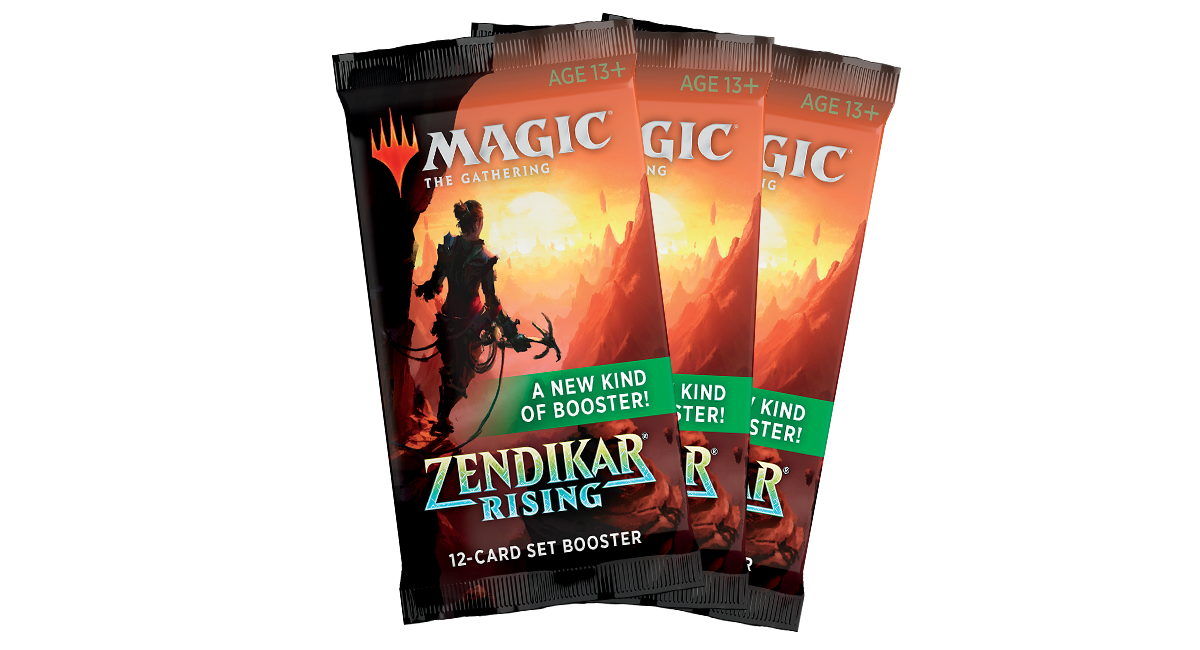 The idea for printing these games on ad cards came from the 2019 Hackathon. I pitched creating some minigames that could be played with a booster pack. Not just any kind of minigame, but rather ones that may not require playing Magic at all. Of course, your knowledge may still come in handy, but anyone should be able to pick these up and play. I'd definitely recommend some of the games as way to introduce someone to Magic. These games were created to be played with the contents of a Set Booster specifically but might also work with any kind of booster. Feel free to create your own house rules and just have fun with it!

Before we get into the games, I want to give a big thanks to the Hackathon team for keeping the lighthearted spirit of the project alive: Sarah Wassell, Alicia Mickes, Megan Smith, and Matt Stevens. Also, a thanks to our rules editors Gregg Luben and Jeremiah Goad, as well as all the people who playtested with us. We hope to bring you more games in the future!

Base Race is a grid-based strategy game where you take turns moving cards to uncover the location of your opponent's face-down land. It's inspired by Zendikar Rising's new rush of competing adventuring parties with the discovery of the Skyclave dungeons. Lay dangerous traps for your opponents using instants, sorceries, and enchantments. Push forward into unknown territory using high-toughness creatures. May the best adventurer win!

The set up here was pretty tricky to work out. We landed on opening three packs to ensure players are able to have at least twelve cards with Magic card backs since Zendikar Rising is full of lands and DFCs. Having hidden info is critical here! Among those twelve cards is the one basic land which is the base's "flag" you're trying to capture. Place it somewhere protected, but remember, you can move it just like any other card. Sometimes, you might open a high-toughness creature that wipes out nearly everything, but it can still be stopped by a well-placed trap (an instant, sorcery, or enchantment). If you're looking for a more balanced initial setup, you could consider dividing out the cards based on their card types to ensure everyone has about equal creatures, traps, and artifacts. The random distribution is also pretty fun, too!

Booster Blitz is a game you may be familiar with. It's been popularized by Channel Fireball and was even played at MagicFests! I hope that by sharing the rules here, even more players can learn about this fast and fun way to play a game of Magic. Check out Gavin and Melissa playing Booster Blitz here:

Here's a few tips for making your piles and playing:

Booster Sleuth is a deduction game where you try to figure out four key facts about a secret card using just the other cards in the pack as clues. Gavin and I played a game of Booster Sleuth on Good Morning Magic:

Remember, you just need to say the facts (for example, two words in the name, red, 3 CMC, instant, etc.) and not the exact card name. But if you want to really show off, you can give it a guess! Also, the person guessing is free to record how many traits are in common. When testing, we used dice and placed them on the "clue" cards.

Knowledge of common Magic card traits does come in handy here for making an early guess. For example, most cards have two-word names. If that trait doesn't seem true about your card, what are some cards in the set that have long names or a one-word name? Maybe that could be your mystery card. If no color seems true, it's probably colorless, and if multiples are true, it's probably multicolor!

Creating this game was a group effort. We wanted some sort of game that made you feel like a detective, figuring out a secret card. Games that required you to name the card were proving a bit difficult. Players would often say things like "I know it's a red card, and I can even describe the art, but I just can't remember the name!" The four traits are our solution to that tip-of-the-tongue feeling.

Roil Royale is the simplest game of the batch, relying almost entirely on chance. Inspired by the dangerous lands of Zendikar, one wrong choice can get you eliminated from the game. Although it works as a two-player game, I recommend as many players as you can get because the fun is in watching players get eliminated one by one. To add a bit of strategy, we added in the foil as a "peek" to help make those critical last decisions between victory and defeat.

The Roil Royale game began as a horror-themed, elimination-style game, thus the Wolf token in the center of the table. We had to figure out a one-of card in the pack to be the elimination card, which could either be the foil or the land in the case of the Set Booster. With the set being on Zendikar, the land seemed like the obvious answer, so we reflavored the game to match.

Strictly Better is our group party game where you match cards to a list of traits. This game is inspired by Meghan and Maria of Good Luck High Five and their booster box–opening games. Choosing the cutest and grossest card of the set is a truly time-honored tradition. I encourage you to check out their website and YouTube channel. I kicked off the first meeting of the Hackathon by playing this game, and I think it really helped set the tone for the creation of the rest of the games. It's a classic formula where the players are the ones truly crafting the fun. I hope you all enjoy it!

We played a couple rounds on Good Morning Magic recently:

Will you be a judge that looks for the "most correct" match, the funniest, or the most absurd? The trait list is relatively generic with a few Zendikar-flavored ones thrown in, so you can play with any pack. If we print this game again, I'd hope to update the list to keep things interesting!