t is time to choose a side.

While with Scars of Mirrodin the emerging Phyrexian threat was just that, a dark undercurrent threatening to topple a well-buffed metallic utopia, with Mirrodin Besieged there can be no doubt that the Phyrexians have arrived, and they mean business. 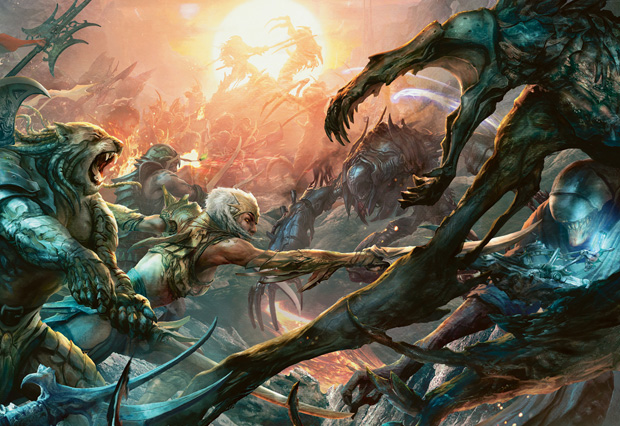 The Prerelease of Mirrodin Beseiged is now imminent (this very weekend), and it promises to be something a little bit special. There are those among you that might suggest that every Prerelease is special—after all, there can only be one first time, and Prereleases are exactly that—the very first time that you have the chance to lay your hands on new cards. Even ignoring the new cards (and don't worry, we won't be ignoring them for long), the Prerelease event for Mirrodin Besieged has a whole new twist.

Battle lines have been drawn in the Phyrexian-Mirran war. Where in Scars of Mirrodin Phyrexia was still emerging, it is now a formidable force, representing about half of the set. When you sit down to build a sealed deck at the Prerelease, some new rules will apply, a devilish perversion of normal sealed deck that will put you on the very edge of the conflict. While every competitor will have three Scars of Mirrodin packs to work with, they will also have three more packs, and one big decision. 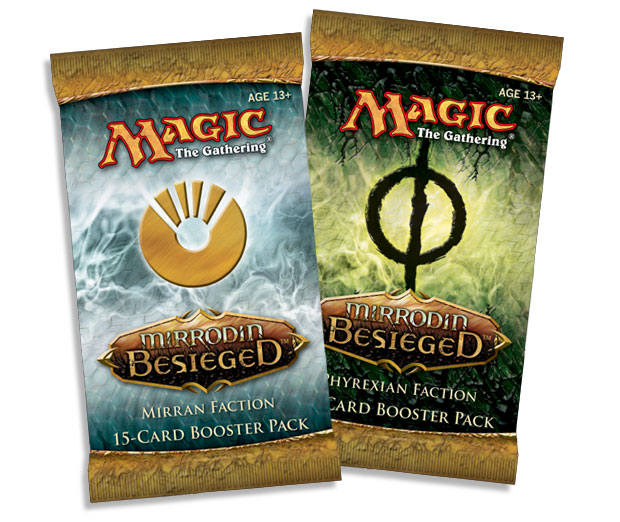 For Prereleases only, Mirrodin Besieged will come in very special packs. These packs will only contain cards from a single faction. When you register for an event, you will be very clearly showing your allegiance, and that will affect what cards you will open, and even the Prerelease card that you receive.

Our lives are the collective results of our decisions. The choice to be made at the Prerelease is far from being the most important one you're likely to make any time soon—there is plenty of fun to be had with each faction. However, which faction you choose will almost certainly have quite the impact on how you might go about winning the game.

For those of you that have paid much attention to Scars of Mirrodin, you will already be aware that the mechanics in the set are aligned to factions. Metalcraft is the domain of the plucky Mirran rebels, while infect is the weapon of choice for the invading Phyrexian empire. This has not changed, though we do now see that the color focus of the two warring entities has broadened slightly. Red and white are still the stronghold of the Mirrans, but now they have a smattering of involvement with the more traditionally Phyrexian green and black. By contrast, the Phyrexians have infiltrated red and white to a small degree. Blue remains delightfully on the fence, with a similar mix of cards across each faction. 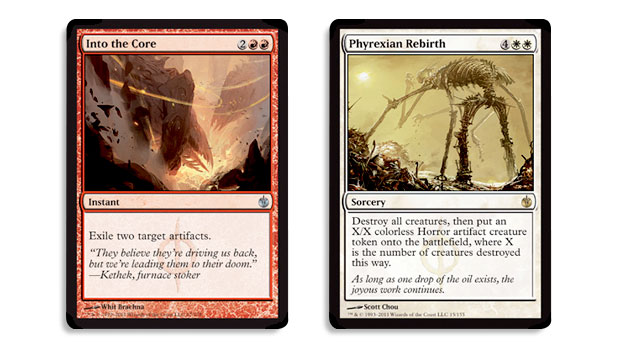 What does this mean when you are picking sides? If you are a big fan of metalcraft, or particularly like casting red spells, then you might find yourself with slim pickings from Team Phyrexia. However, if you take childlike glee in spreading Phyrexia's own infectious brand of damage, then you would be short-sighted to play in the Team Mirran camp.

Once you have opened your packs and built a deck, the actual play will be much the same as one might find at any Prerelease, that is to say a right royal good time. Prereleases are fairly relaxed affairs, where players from all echelons of the game come together to have a good time. If you are looking for a great place to start in tournament Magic, then there is no better place to visit than your local Prerelease. Between games and matches, it is common to see players helping each other out with pulling together the best forty-card deck to build with the cards opened, and after events have finished there is ample opportunity to trade with others, or get involved in pick-up games for thems that just can't stop playing.

Building a deck for the Mirrodin Besieged Prerelease is likely to be influenced by your faction choice, but there are some patterns common to both sides. You probably want to be playing a forty-card deck (the rules won't let you go any lower than forty cards, and going higher means you won't draw your good cards so much). Realistically, staying to two colors is likely a good plan, as is playing around about seventeen lands. The fact that packs are skewed towards faction colors, and that there are still plenty of artifacts around, will only help this. 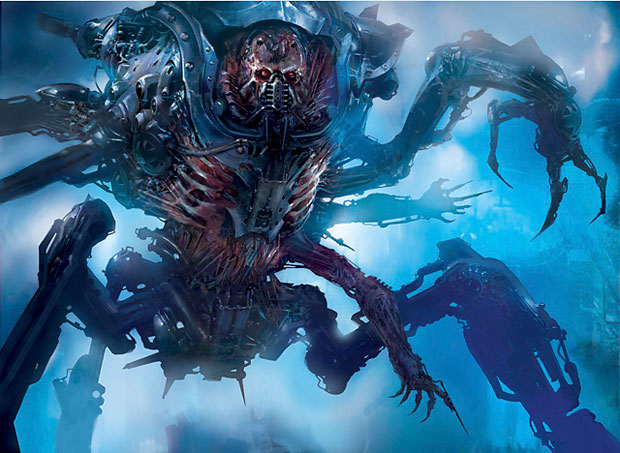 I am not here to tell you which side to choose. I know that the dark ichor of Phyrexia courses through my veins, and that I'm looking forward to the rapture of cracking packs untainted by any of this Mirran nonsense, but I would urge you to pick whatever plan works for you and run with it.

For me, Sealed Deck has a lot to do with making a plan and executing it. While I will tend to follow the same sorts of rules for building a sealed deck every time (prioritize removal and evasion creatures, about seventeen creatures, seventeen lands, and six spells, try to stay two colors), I also never want to go into battle without some notion of how I intend to win.

This plan is not always the same. Sometimes I will be looking to swarm out with cheap threats, and aggressively take control of the game before my opponents can draw or cast their big spells. Other times I will have a collection of flyers that I see as my path to victory, and I'll know to save my removal to make sure that they can get through to get the job done. Still other occasions will see me playing a very defensive deck, relying on drawing big spells to end the game once I have blunted any early offence from my opponents. Having a plan helps me build decks, especially working out the last few cards to cut (those that aren't quite good enough to be in my starting forty). Having a plan also makes some decisions in game easier to make.

One thing that is always kind of cool is when you see a new card, and it alone forms a whole new plan for you. A card that can turn a loss into a win, if you just play it at the right moment. That is what my preview card for Mirrodin Besieged represents.

One of the classic problems that comes up time and again in Sealed Deck games is the stall. Both players have reasonable draws, and the board gets clogged up with creatures on either side. In those sorts of situations, it is often correct for each player to play fairly defensively, hoping to draw a bit of removal or evasion to get past the issue.

I hate stalls. When forming a plan for my sealed deck, working out what to do to break a stall is one of my top priorities. Sometimes the plan isn't a great one—just hoping to draw a flyer to plink through with, or a removal spell to leave me one creature ahead.

I'm much happier when I have a card like this one to work with. 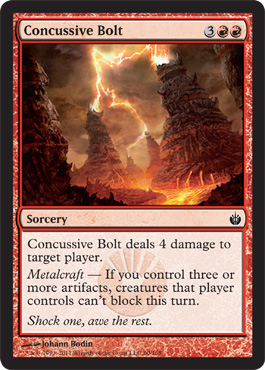 This is a card that will change games. Occasionally, that burn spell to the head will do the final points of damage, which is in itself a good way to break up a stall. Where things get really interesting though, is when metalcraft is turned on. If you know that you have a Concussive Bolt to draw to, then all of a sudden building up a stall is not a big concern. It could easily be that five mana at the right time could set up an attack for lethal from nowhere.

Assuming that you have sufficient artifacts in your deck to reliably have metalcraft (I like to aim for thirteen for something like this that needs metalcraft late game), then Concussive Bolt is a win condition that I can get pretty excited about. It means that you can have a deck that gets in a bit of damage early, and then have insurance against stalls. 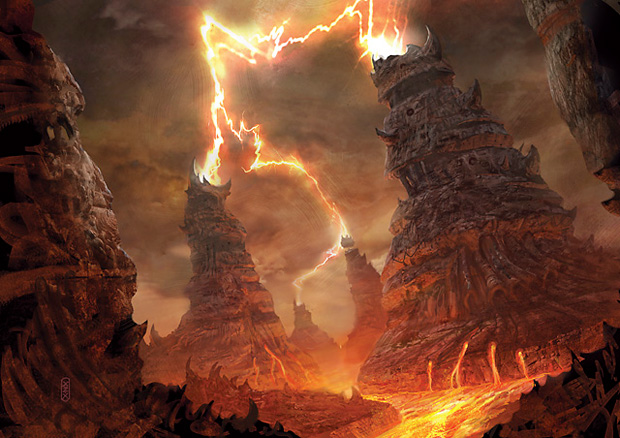 Of course, I already have a plan for the Prerelease, that has nothing to do with casting Concussive Bolt. I shall be at the London regional event, battling for the glory of Phyrexia against all comers, with swag to give out to anyone that beats me. For thems that want help on deck-building, I'll be doing that too. Alongside me, Richard Hagon will probably be fighting for the Mirrans. At some point we may even battle against one another, for bragging rights on coverage duty. What I'll be doing with Concussive Bolt is preparing to play against it, watching opponents playing s. I'll be eyeing up artifacts as they build up on my opponents' side of the board, attacking where I can, and saving artifact removal to stop metalcraft at just the right moment.

Also, I shall be infecting the world.

I hope that you have as much fun at your Prerelease as I'm going to have at mine. If you are in London, come say hi. It would be great to have a game.