Peril in the Stars

No more. Xenagos, the usurper god, has ascended. War engulfs the plane, pitting the pantheon against its own worshippers, and it will take heroic effort to set things right. 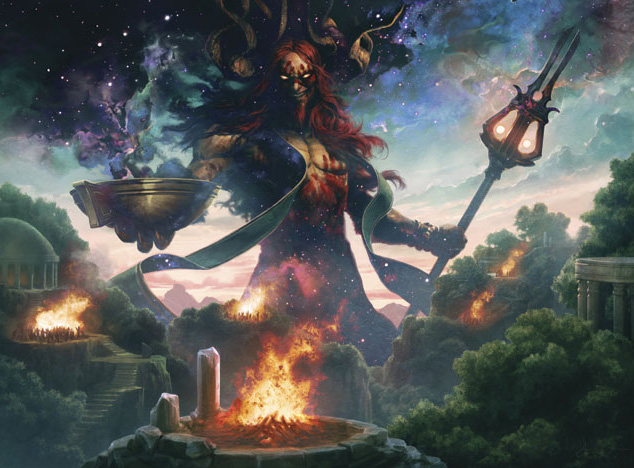 After defeating a minotaur horde sent by Mogis, god of slaughter, the Akroans and their allies held a great victory celebration. But their merriment was short-lived, as Xenagos used the occasion to stage the final ritual that propelled him to godhood. The other gods blamed the mortals for disrupting their supremacy, and they swore vengeance against human civilization.

Theros is in danger of tearing itself apart. Only through the removal of the interloper can the natural order be restored. One hero has taken on the challenge to journey into Nyx and confront the usurper god: Elspeth, the Sun's Champion. 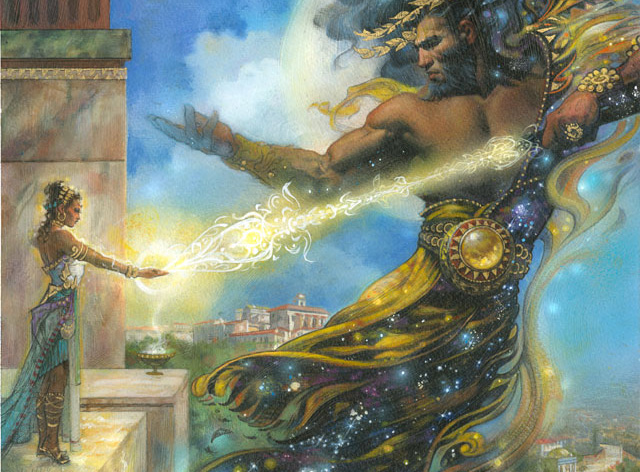 Among all the gods, Heliod is especially furious at Xenagos's ascension. He believes Elspeth to be complicit and is intent on destroying her. After the Great Revel, Elspeth fled into the wilderness, barely escaping Heliod's wrath. Now Anthousa, the hero of Setessa, commands the mortal armies against the creatures born from Nyx.

Although things look bleak for Elspeth, she has unlikely allies in the leonin who dwell in the remote mountains outside Akros. They had been observing the siege from afar, remaining aloof from the affairs of gods and humans alike.

Ajani Goldmane, Elspeth's old leonin companion, came to Theros in search of her and became a mentor to his kin there. The Theros leonin told Ajani what had happened and assured him that Elspeth did not precipitate the crisis. With the help of the leonin king, Brimaz, the two Planeswalkers were finally reunited at Tethmos, the leonin's main encampment. Together, they swore an oath to set things right. 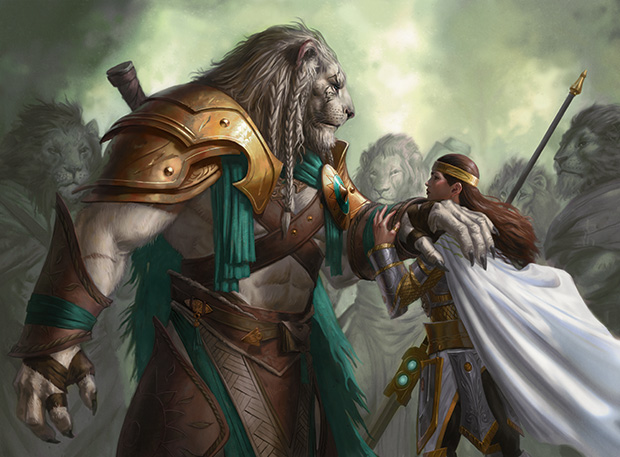 Kruphix, god of horizons, is one of the very few who know the secret of how to enter Nyx and tear Xenagos from the stars. He has sworn to protect the knowledge, but Elspeth learns of its existence and is determined to find out how to undo the harm she inadvertently caused. Along with Ajani, she travels to the Temple of Mystery at the world's edge in hopes of communing with the god of horizons. 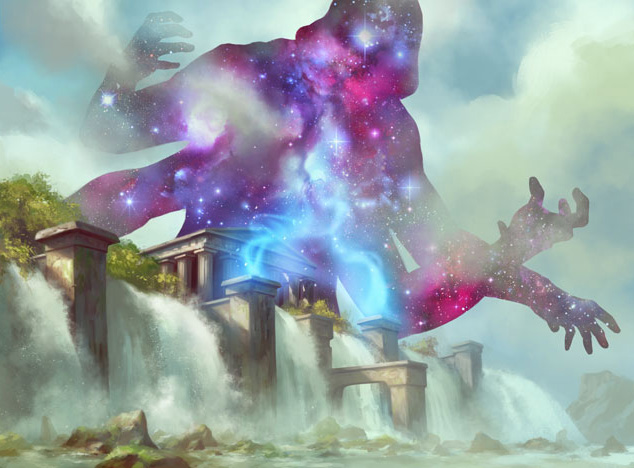 On their path to Kruphix's temple, the companions are repeatedly assailed by Nyxborn creatures. In her dreams, Elspeth is haunted by visions of doom, and she secretly fears the consequences of her journey into Nyx. Finally, though, they arrive and learn the inscrutable god's counsel.

Now Elspeth and Ajani face Xenagos on his home ground. Armed with the mighty weapon Godsend, the reluctant hero Elspeth assumes the ultimate burden of saving the world. 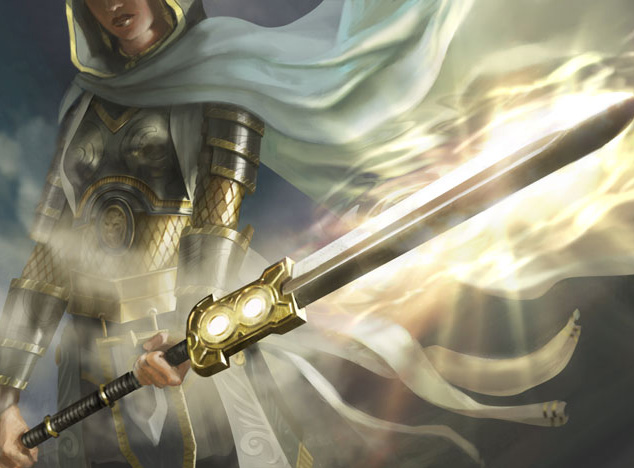 The Gods of Journey into Nyx 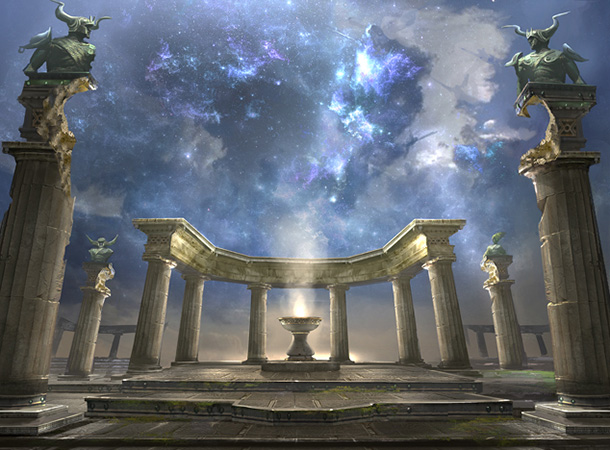 Theros is ruled by a pantheon of gods with their own unique attributes, desires, temples, and worshippers. As on the other planes of the Multiverse, the magic of Theros is fueled by mana that comes from the land itself. All mana has one of five innate colors, and all of the gods of Theros maintain influence over the mana that reflects their respective domains.

The five primary gods of Theros—Heliod, Thassa, Erebos, Purphoros, and Nylea—are each associated with a single color of mana. The other ten gods govern multiple aspects of mortal existence and each span two colors of mana. With the ascension of Xenagos, fifteen gods form the pantheon. 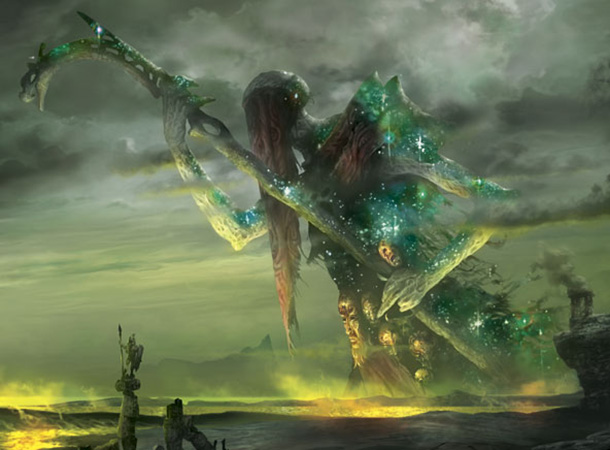 Athreos is never without his signature staff, a gnarled length of dark wood. When the dead arrive on the shores of the Rivers, he lays it across the water to transform it into a barge. In his role of easing the passage from life to death, he is associated with white and black mana.

The custom on Theros is to craft a funerary mask of clay for the newly dead. In this way, the identities of the deceased are "framed" for Athreos, so that he can mark their proper passage. Such masks are broken into shards called ostraka and used as barter in the Underworld. 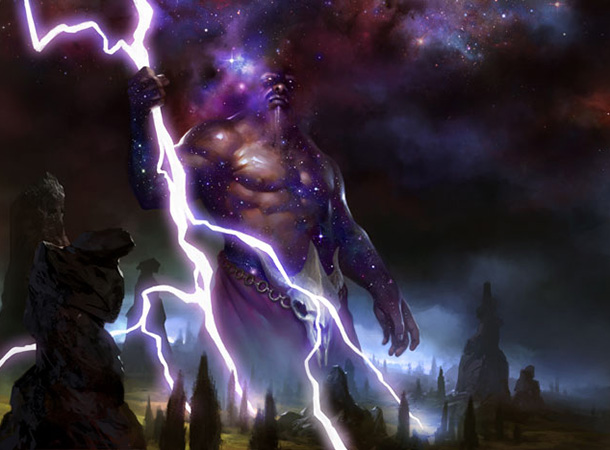 A bolt from the blue can be both devastating and inspirational. Likewise, Keranos embodies the fury of the storm and the sudden blaze of epiphany. A god of little patience and less mercy, he dispenses insights and blasts of lightning in equal measure. As such, he is associated with blue and red mana.

As the embodiment of wisdom, Keranos is intolerant of mortals, whom he sees as reckless. Yet he also respects those who take action with clear purpose, especially if they seek his approval first. Such individuals earn a two-edged blessing: momentary glimpses of the future, but the inability to change what is to come. Among mortals, Queen Cymede of Akros is Keranos's greatest servant and has done much to spread the god's worship in the city. 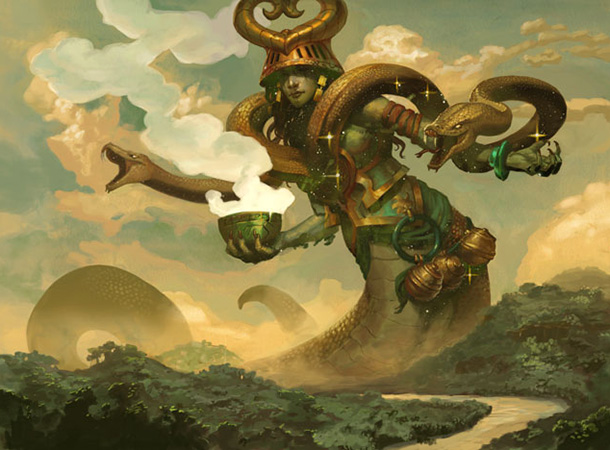 Deadly poison can be healing medicine in small amounts, and this dichotomy is reflected in the god whose province is such tinctures. Pharika is the keeper of apothecary knowledge, the source of dark magic. She is also the mother of all gorgons, and their snaky bodies resemble hers.

To those who would oppose her, Pharika is a fearsome enemy, but mortals she favors are hard to kill. She bears a potion cup from which she dispenses draughts that simultaneously strengthen her servants and slay her enemies.

Pharika is associated with black and green mana, and her dual nature also governs aging—the stretch of life and the approach of death. Stories say that the secretive god has hidden medicinal knowledge within the natural world. None know whether she did so to reward or to toy with mortals who quest to unearth them. 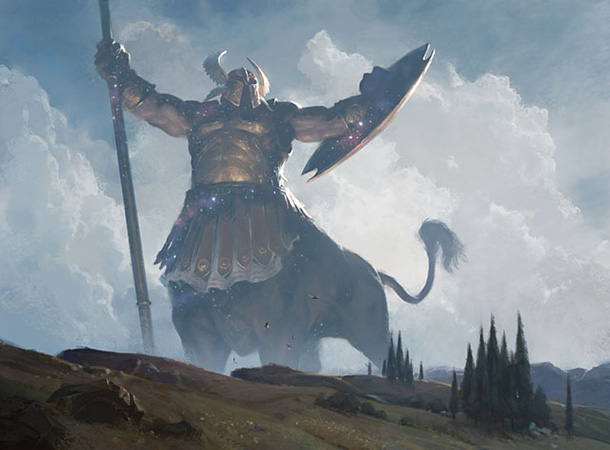 Iroas seeks to encourage the honorable aspects of warfare in mortals. He favors the militaristic polis of Akros and has established the Iroan Games in that city's arena, whose podium is also the main temple to the god. Each year, during the height of summer, athletes and soldiers from all across Theros compete for the wreath that signifies the highest achievement in physical prowess.

The god of victory is associated with red and white mana. His devotees include champions of the Games and charismatic commanders of troops. King Anax of Akros, a ferocious warrior and skilled tactician, is a longtime worshipper of Iroas, although in recent years he has also embraced Purphoros as he forges his polis into an empire. 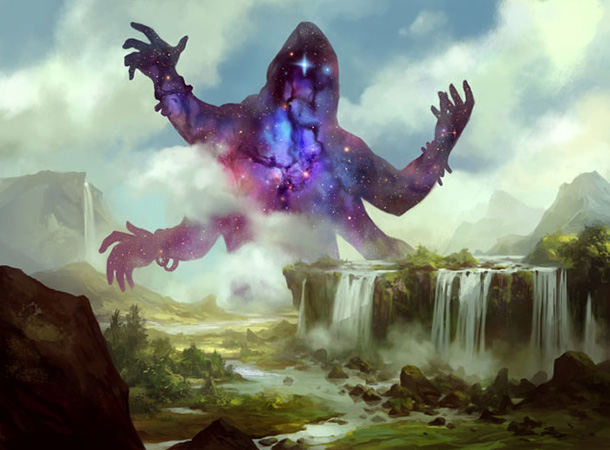 The most enigmatic of the gods, Kruphix has dominion over the potential, the distant, and the unseen. Thus, he is seen as an oracle of dreams. He also governs navigation, mystery, and the cycles of time. Mortals say that Kruphix is the most ancient of the pantheon, the keeper of mysteries that no others are meant to learn.

The reclusive god speaks rarely and counts few worshippers. He often takes no real form but appears only as a Nyx-filled space in the sky. Kruphix is associated with green and blue mana, and his temple is built over a cataract at the very edge of the world.

Kruphix knows the truth of the origins of Theros and its deities, and he understands the price that must be paid for the power to slay a god.