To my dear friend Vadrik,

I regret to write this, but I must face the truth. Daylight is losing its battle against an invading night.

This autumn in the provinces is crisper than usual, the harvest harsher. The night leaves a skin of frost on the pumpkin fields and on the last clinging leaves of the Kessig woods. No tentacled horrors have been seen since the closing of The Travails, and the Keening Mother slumbers peacefully behind the face of the moon. But I've heard farm folk whisper of a wrongness since that time, a misstep of the ticking hours, a bend in the shape of the darkness.

I fear not all was put right after The Travails. And on this world, there are always those who will take advantage of darkness.

Of course, I hear the howls in the night. At first, Kessigers called it a blessing from Sigarda that, since The Travails, those howls always died out, lonely plaints to an uncaring moon. But more and more, the wolf-sounds echo and multiply, full and strong and yearning, a chorus of savage throats.

As I pen this, I hear my own pack whimpering in the woods behind me. I feel the urgent way they paw at the earth, how their heartbeats quicken as they look back into the darkened Ulvenwald. I know they feel the pull of the howl, for I feel it, too. We must seek a way to put things right, and soon.

Welcome back to Innistrad, a chilling plane of werewolves, vampires, and other things that go bump in the dark. Wanna read up on all the Innistrads and Outistrads of the plane?

Let's start by recapping what happened most recently:

The destructive feud between ancient planeswalkers Nahiri and Sorin began a hundred lifetimes ago. A bitter disagreement led to Sorin's ruthless decision to lock Nahiri in a magical prison, where she stayed for centuries. The feud came to a head two years ago when a freed Nahiri lured the Eldrazi titan Emrakul to Sorin's home plane of Innistrad to exact her vengeance.

Emrakul's presence unleashed a tide of madness, twisting the plane at every level. Villagers experienced delirious visions and strange body mutations. The angels, normally guardians of humanity, went mad and inflicted a horrific inquisition on the populace, led by the archangel Avacyn. Avacyn, once a stalwart symbol of hope and safety to the populace, was bitterly unmade by her creator, Sorin.

A group of heroic planeswalkers known as the Gatewatch came to Innistrad's aid. The necromancer Liliana summoned a massive army of zombies to help fight the wave of Eldrazi horrors, and the others joined forces to trap Emrakul in Innistrad's moon, which is made entirely of a magical substance known as Moonsilver.

This horrific series of events is now referred to by the populace as "The Travails." The term carries with it a sense of well-mannered euphemism. No one wants to relive the horror of that time, so in polite conversation, "The Travails" is the courteous thing to say.

While Emrakul's madness has dissipated, it has been replaced by a new uneasiness. The humans of Innistrad once again face the night without their protector Avacyn. Now their thoughts turn to the past—old traditions, old protections, old fears.

Some denizens of Innistrad have begun to direct their prayers to the archangel Sigarda, the most powerful angel left in the wake of The Travails. Sigarda was one of the few angels who never succumbed to Emrakul's influence, and she fought nobly to defend humanity from Eldrazi monstrosities. She has taken up Avacyn's role as best she can, answering the fervent prayers of the lost and endangered. The people have given her many epithets: Sigarda the True, Sigarda the Shadow-Slayer, Sigarda the Hope of the Lost.

AVACYN'S COLLAR, THE SYMBOL OF HER CHURCH 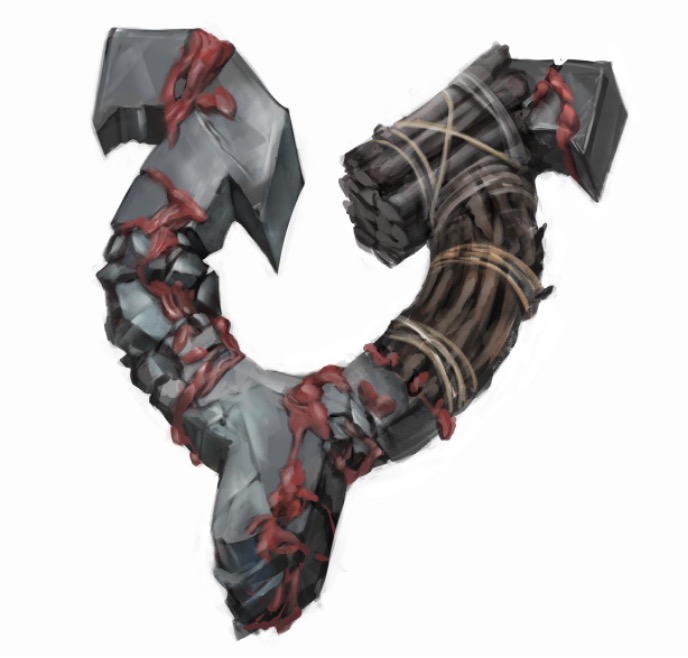 All throughout the provinces, villagers have taken it upon themselves to do rough, handcrafted repairs of the twisted symbols of Avacyn. The elongated shapes of the warped stones have been shattered, their stone harvested for the repairs. Today, cemetery headstones, church shrines, and roadside monuments all display restored symbols of Avacyn. Each was mended by rough stonework by hand: broken and cemented back together or lashed together with wire and twine. These are symbols of hope and self-reliance—even when no angel came forward to fix the world, the people have come forward to fix what they can.

Once Emrakul was banished to the moon, the great sigil on its face formed by the imprisonment spell eventually faded from view. However, the Eldrazi still resides inside, slumbering quietly. Prominent astronomancers and the Dawnhart Coven of witches believe that the cosmic titan's residency in the moon might be related to Innistrad's newest problem.

Innistrad's day-night cycle is darkening. Sunlight is waning, the nights are getting longer and longer, and a chilly frost descends on the world. More night means more attacks by werewolves, vampires, and other horrifying creatures who have a vested interest in creating eternal night

The werewolf leader Tovolar once led the Mondronen howlpack. His and other howlpacks disbanded, chased off and hunted down by angels when Avacyn was freed. Now, in the growing darkness since The Travails, Tovolar sees a chance to lead once again. Driven by a fierce pride in werewolf-kind, he seeks to unify all the howlpacks under his rule. He stands for the freedom to embrace the savage beast within, and many werewolves have left their human homes to join him. Once he has a powerful pack behind him, he'll stop the Dawnhart Coven and anyone else who wants to bring back the sun.

The strong sway of the errant moon has produced a new breed of werewolf called the dire strain. In human form, these werewolves are markedly tall, lanky folk with a grim cast to their appearance. They distrust others, looking strangers up and down with their sunken, beady eyes, somehow both suspicious and bored. In werewolf form, they grow far larger than other werewolves, with legendary strength. They're capable of shredding stone with their claws and snapping bone with the slightest bite, and they're said to shrug off even blessed silver. The dire-strain werewolves are Tovolar's heavy hitters, the true powerhouses of his army.

In the times before Avacyn, a smattering of covens and druidic cults conducted folk magics across the provinces. They practiced ancient hedge magics and nature rituals meant to improve crop yields, bring luck at weddings, and protect families from creatures of the night. Many of the practitioners of these traditions, called hedgewitches or simply witches, were hermits and outcasts, but their traditions permeated the towns and villages as well.

When Avacyn was created, villagers turned to her for protection, and reliance on hedge magic waned. Hedgewitch covens vanished or retreated into obscurity. Today, more residents of the provinces are turning back to traditions and ancient covens are meeting once again, especially in Kessig and Nephalia.

One of the smaller covens of hedgewitches was known as the Dawnhart Coven, a cabal dedicated to nature and community. In the last two years, they have begun meeting again under their leader, Katilda, with most of their members being from small towns around the Natterknolls. They see signs of spirituality everywhere and are focused on reviving the ancient tradition of Harvesttide. 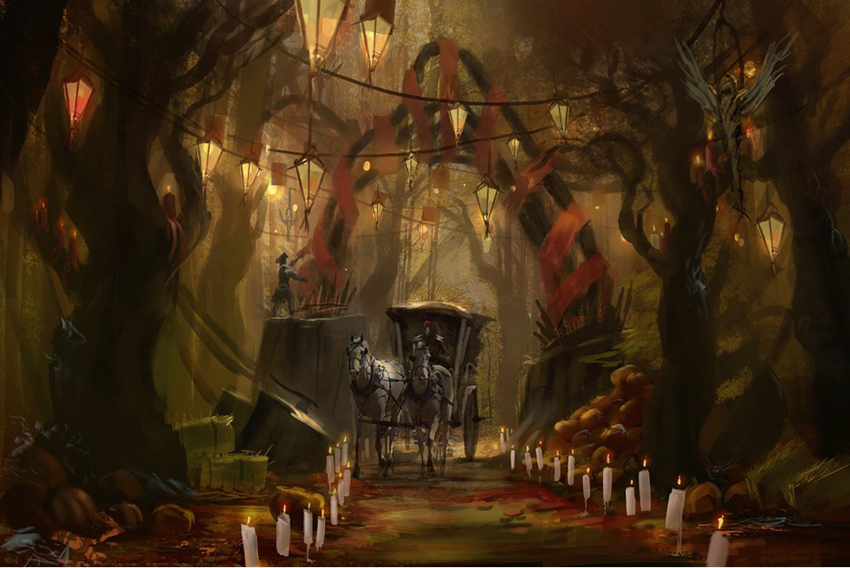 On a world where survival is never a guarantee, life is to be celebrated. Harvesttide was an ancient harvest festival, an annual celebration of life and community in the years before the Avacynian Church. Villagers commemorated the yearly Harvesttide with feasting, dancing, songs, chants, mask-wearing, bonfires, and wicker effigies. The Dawnhart Coven believes the festival is crucial to performing a ritual that would restore the balance of day and night on Innistrad. 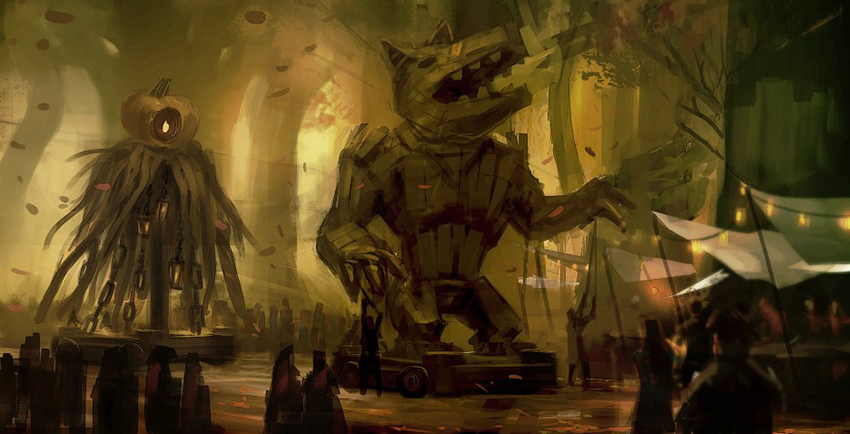 The Ulvenwald's trees glimmer with candles, lanterns, and magical spark-lights. Streamers and ribbons decorate the branches. Travelers along the paths toward Harvesttide can also see wicker "floats" with effigies of werewolves, zombies, vampires, and other fearsome creatures, to be triumphantly and defiantly burned during the festival. 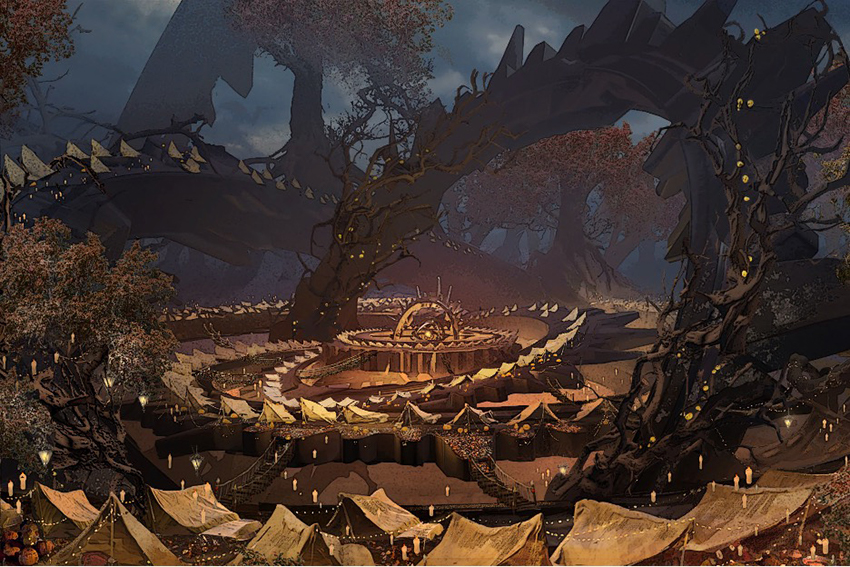 Built by hedgewitches centuries ago, the Celestus is an astronomical mechanism in the heart of the Ulvenwald. Its purpose was to track the movements of stars and the moon. Katilda and the Dawnhart Coven believe she can use a spell to restore the day-night balance, but it's going to require activating the Celestus. To do that, a mechanism called the Sungold Lock in the center of the Celestus needs to be joined with an enchanted, blessed-silver item called the Moonsilver Key. Unfortunately, the Moonsilver Key has been lost for generations

While I have greatly enjoyed not hearing from you, I have decided that the value of rubbing my successes in your face far outweighs our blissful two-year silence. While your ghoulish girlfriend, Lillian Vest or whatever, may have dumped you, she left behind all her toys: that mass of zombies she raised to fight all those tentacle things. I don't know what happened, but she left them all wandering the streets of Thraben. The people were terrified, and they all left. It was hilarious!

Now I'm not one to look a gift corpse in the mouth, so I took the reins. Now I have a zombie army and a whole city to myself. I live in the fanciest room in the least-destroyed building, and I don't miss our games even a little bit. I even have a suitor to wage war against. His name is Wilbur, and I hate him, but a little attention is nice before I kill him (again).

Oh, what's that? You live with a crusty old man and have accomplished nothing of note in the past two years? That's so sad. I'm having this letter delivered by a ghoul whom I've commanded to do nothing but cry, just to demonstrate how sad I am for you.

Check out the Innistrad: Midnight Hunt set credits at the bottom of the product page.