Class is in session!

Welcome to Strixhaven University. It's a new setting for Magic, full of tests, teachers, and plenty of trickery. With some of the most powerful spells in the Multiverse contained within its Biblioplex, Strixhaven is the perfect place to hone your spellcasting.

And in Magic terms, that of course means tons of brand-new cards! And Prerelease weekend is the first place you can get your hands on them. What can you expect from Prerelease weekend, and how can you be a part of it? Let me tell you all about it!

If you prefer watching to reading, you can find out more by watching this video on my YouTube channel, Good Morning Magic, here:

Otherwise, continue to peruse the pages of this guide for all the tips you're looking for. Study up!

Prereleases are events where it's your first chance to get your hands on the new set—and to me, the heart and soul of the Prerelease experience is the energy of getting those cards and playing with them. And even if you're doing that at home rather than in a store, you'll still be doing it with so many other people around the world as part of the global experience and conversation. Thanks to the internet, we're all connected!

Prereleases are great because the set is totally new, the footing is equal as everybody plays with the set for the very first time, and you just get to relax and have fun exploring the new cards. It's a lot of fun for old and new players alike!

If you're a Sealed Deck veteran, you may want to skip ahead to the next section, where I talk about what you can expect for Strixhaven. But if you're new to the world of Sealed Deck, or are maybe just looking for a few extra pointers, read on!

While traditionally Prereleases are run as in-store events, players can pick up Prerelease Packs and take them home in light of COVID-19. In fact, we recommend it. In different areas of the world, different rules and restrictions may apply to what can be open—so please take appropriate precautions, be aware of government-level requests, and do only what you feel comfortable with.

And if you're not able to get to a local store for any reason, you can still play on Magic: The Gathering Arena! They will have Sealed events available, and the play experience is still the same great Magic. It's an excellent time to try out MTG Arena if you haven't already.

Okay, now, let's see. You have a store selected, and you've taken a look at all the awesome cards in the Strixhaven: School of Mages Card Image Gallery.

You're all set and ready to enter Strixhaven University! Now it's time to actually open some of those cards.

Strixhaven is themed around five colleges, each representing a two-color pair. Having a rough idea of them is going to be crucial to your Prerelease experience. Why? Because for the Prerelease, you're going to need to select a college to join!

You'll pick one of the five colleges and receive a special Prerelease Pack geared to that college. That doesn't mean you have to play that color combination, but it definitely gives you a leg up in doing so. You can join one of the following: 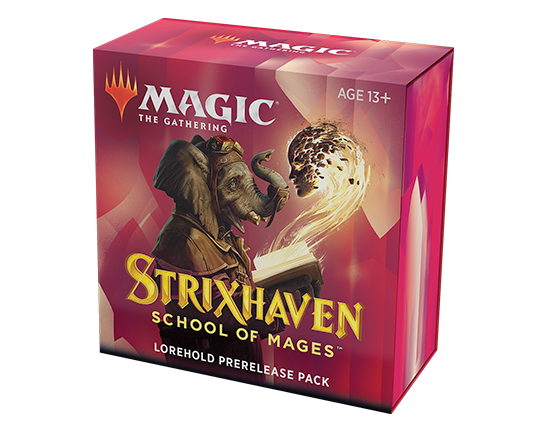 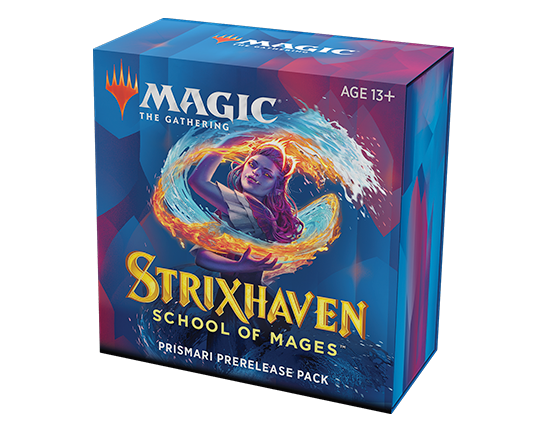 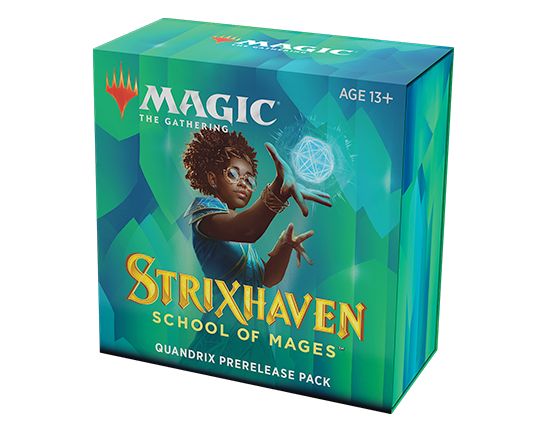 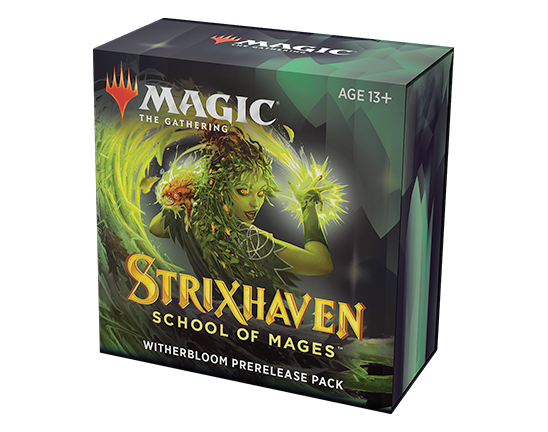 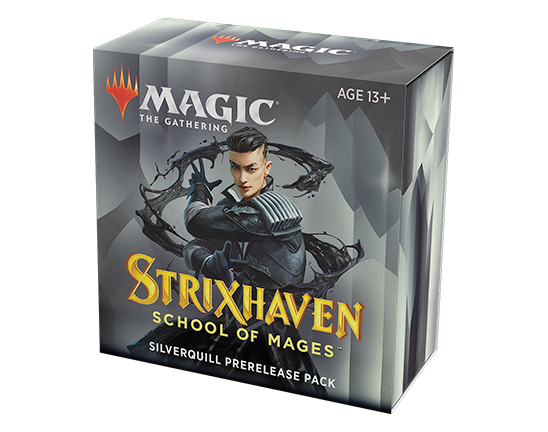 For more information on each of the schools, check out this article. Not sure which school you are? Go take your test here!

It's a tough choice—think on it and choose wisely.

Once you've finally made your decision, you'll have your Prerelease Pack in your hands! (And once again, check with your store about preregistration: they may have limited numbers of each college.) What can you expect from it?

Well, let's say you're like me and you take Silverquill.

To start, you'll find five Strixhaven: School of Mages Draft Boosters inside, plus an additional college booster—this is a special booster that helps you get cards for the college you chose and a rare or mythic rare in your colors.

On top of that, you'll also get a foil Prerelease card—which can be any rare or mythic rare in the set!

You'll also get a few other goodies: an awesome spindown life counter, an MTG Arena code, an insertin fact, let's just crack it open and take a look! 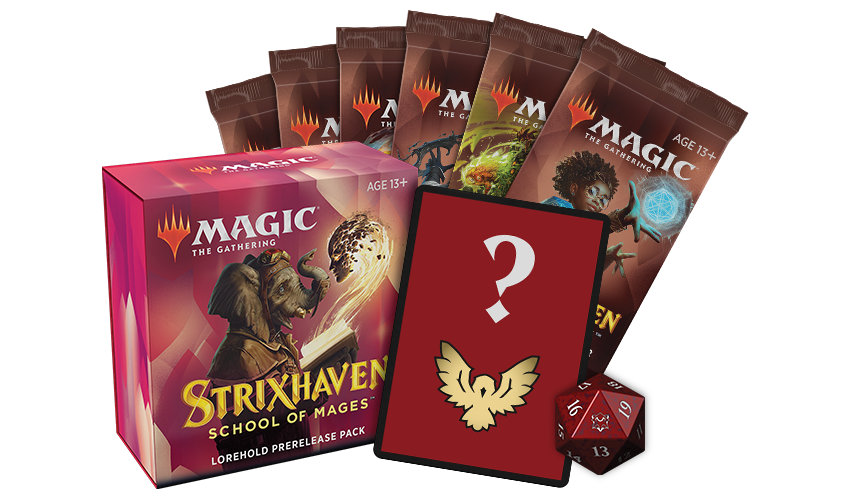 There's plenty in here to study—so let's get to building!

Front and center are those booster packs. First thing's first: crack them open! Then, you'll have a stack of cards.

First, lay your creatures out in mana-cost order. This helps you see what creatures you're going to potentially be able to cast at each part of the game. (Don't lay your noncreatures out at this point unless they're cards you are planning to play as soon as you have that much mana—for example, you will generally cast Eager First-Year on turn two, whereas Beaming Defiance isn't usually a turn-three play.)

To see this in action, you can check out my video from above to see me demonstrate the process.

Now that you have your core creature base figured out, it's time to add in spells! Pick favorites among your colors to bring your deck to 22 or 23 cards, then you're good to go from the spell side. 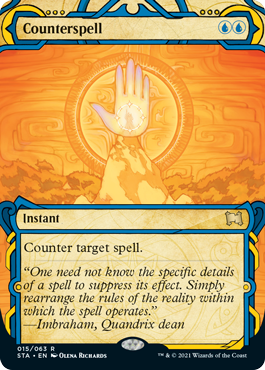 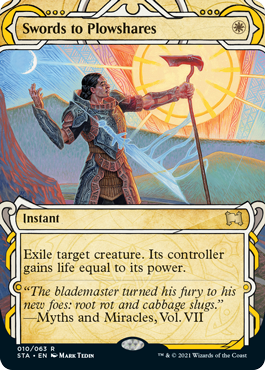 These are entirely playable in Limited, so as you're opening them up you can absolutely use them! There are 63 in all. Outside of Limited they're legal in any format they would otherwise already be legal in.

They're a blast to play, and really bring back some memories. I hope you enjoy them!

On top of that, the rest of our Booster Fun initiative continues with this set, and there are all kinds of alternate, tricked-out versions of cards.

For example, there are the borderless planeswalkers, like these! 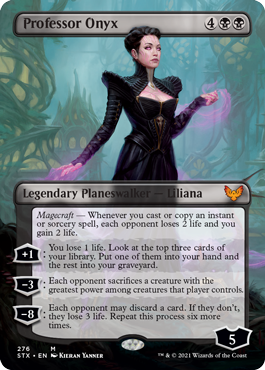 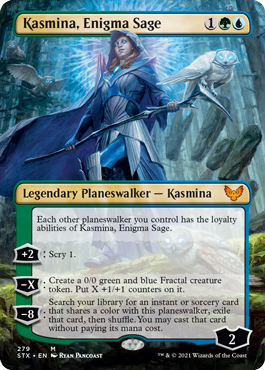 For more information on the cool card treatments available in Strixhaven, check out the Collecting Strixhaven: School of Mages article here.

Depending on where you are in the world, playing Magic in a store may be a problem right now due to COVID-19. So, if you get product to bring home and can't play in a store, what should you do?

Well, of course there's Magic: The Gathering Arena and Magic Online, which both let you play the set from a safe distance. But one other thing you could try is playing over a phone or a webcam!

But now we live in a much different age—an age where webcams are readily available.

Depending on the setup you and your friends have, there can be many ways to do this. One I can highly recommend is called SpellTable. Complete with life-total tracking and card lookup, SpellTable can be run through a webcam on your computer but also your phone! It's easy to set up: just log in with your Wizards account and you're good to go. Some stores will even be offering remote Prerelease play opportunities using SpellTable! You can check out SpellTable over at SpellTable.com, and be sure to check in with your local store about play opportunities.

While you're at your store to pick up Prerelease Packs, you can also buy other things—like booster boxes! Be sure to call ahead to preorder one, and while supplies last, you should be able to pick one up. 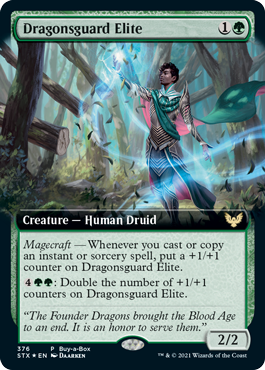 Strixhaven also releases alongside Commander (2021 Edition), which includes five Commander decks! Be sure to talk with your store about these as well. 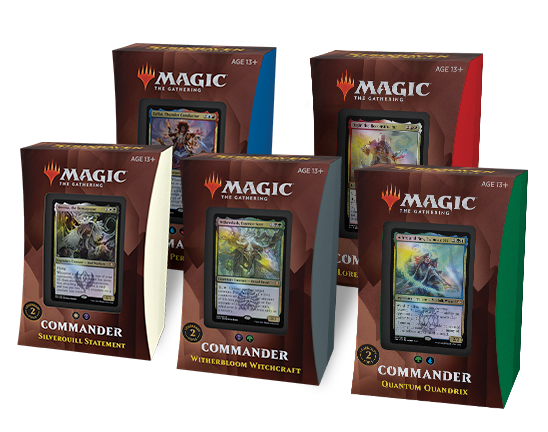 The Mechanics of Strixhaven

Strixhaven has plenty of mechanics, like pulling cards from outside the game with Lessons and the new keyword magecraft. How do they work? Check out these mechanics videos created by Matt Tabak!

We've never quite done a world like this, and as someone who grew up loving all kinds of magical school stories, this set hits quite close to home for me. I hope you enjoy what we've created—and find a bit, of wellMagic in all of it!

I hope you've enjoyed Strixhaven previews, and whenever and however you play with the set: have fun! See you in class!