Who Are You and What's Going On?

I'm Doug Beyer, one of the word-scribblers and world-putters-together in Magic R&D's creative team. What's going on is that the second issue of my e-book series,The Secretist, has released. It's the middle segment of the official story of the Return to Ravnica block, and I want you to check it out.

What Do You Mean E-Book Series and What Are You Talking About? 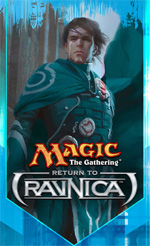 First I'll answer the "series" part. The Secretist is a story broken into three parts. The first, Return to Ravnica: The Secretist, Part One , released last fall and kicked off the story of the young, mind-reading, curious-to-a-fault Planeswalker Jace on the city world of Ravnica (to very kind reviews). Jace rapidly got himself hoodie-deep in a massive power struggle between Ravnica's ten guilds as he chased an ancient, potentially balance-of-power-unbalancing mystery to its cobblestone-covered roots, and now in Part Two, we'll see how the forces of Ravnica close in around him.

Now, I want to clarify the "e-book" part. The Secretist is being released in e-book form only, meaning you'll be using your computer, smartphone, Kindle, Nook, iPad, or another electron-pushing device to read it. You don't have to own special equipment to check out The Secretist, though. If you have a dedicated e-reader, that's great, but all you need is a computer.

Why Don't You Just Put It Out As a Physical Book Then I Wouldn't Need an E-Reader?

For this story, we're trying e-book only. Sorry; that's the experiment. One question we're trying to answer is, "What would happen if we released a story as an e-book only?" and we're still gathering data about that.

But again, happily, you don't need special equipment to read an e-book. If you have a smartphone, tablet, laptop, or jury-rigged computation-jalopy of any description, you're all set to check out The Secretist. If you get the book from Amazon, for example, you can download their free Kindle app, crack open your copy of the story, and be ready to tag along with Jace on his looking-rudely-into-guildmasters'-minds-type adventures in a matter of minutes. It's the future, I guess? Amazing.

Okay Right so Tell Me What's Out Right Now Again 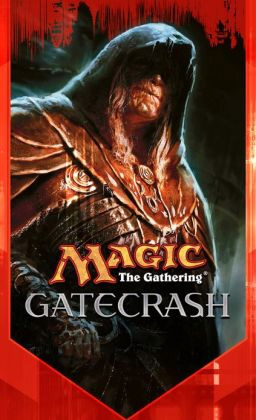 The second episode is called Gatecrash: The Secretist, Part Two, and it has just released. E-absorb it into your e-cerebrum so you can e-find out what Jace does next.

When we last left our telepathic protagonist Jace, he had discovered a code inscribed in ancient stone in Ravnica's historic Tenth District. It points at something called the Implicit Maze, and as Jace delves deeper, he finds that this mystery connects to the mysterious project of the brilliant dragon Niv-Mizzet and the Izzet guild the dragon commands. This information is so dangerous, so likely to warp the equilibrium of the ten guilds in this post-Guildpact world, that Jace has taken extreme steps to extricate himself from the whole matter. I'm not going to go into the details—go read Part One if you haven't—but suffice it to say that Jace has discovered that his mind-magic solution hasn't actually solved his problem. In fact, he finds that he has inadvisably disarmed himself while embroiled in a conflict that involves the obsessive mages of the Izzet, the sadistic demon-worshippers of the Cult of Rakdos, and the secretive agents of House Dimir.

As we open in Gatecrash: The Secretist, Part Two, Jace and his Selesnya compatriot Emmara face down a powerful Dimir ally, the thought-draining vampire Mirko Vosk. As the Planeswalker Ral Zarek explores the meaning of the Implicit Maze for the Izzet guild, tensions flare among the other guilds, and the guildmasters arm for war. Jace will have to regain the upper hand, rearm himself with the knowledge he needs, and break open the secrets that obfuscate what's truly going on in Ravnica.

So Where Can I Buy It?

Head on over to your favorite e-book seller to get all of Part One and the new Part Two. 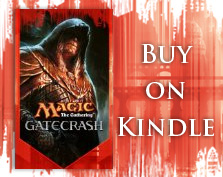 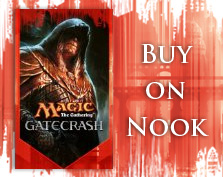 May I also point out, in case you didn't know, that each part of The Secretist is priced at slightly under two dollars? (It's $1.99 in US markets, at least. Your local mileage—or kilometerage—may vary in other parts of the world.) That's a mere stinking eight quarters for Part One, and another laughably paltry twenty dimes for Part Two. (They tell me that Part Three will be the same cost again.)

In total layout, you'll be looking at about six bucks, payable in bite-sized money-chunks. It's like the echo mechanic: Pay a small cost over multiple turns, and still get a big, satisfying story-critter.

That is a Weird Analogy

So In Conclusion Would You Say I Should Go Buy This Story You Wrote?

I would. Thank you, and I hope you enjoy Gatecrash: The Secretist, Part Two.

Praise for Return to Ravnica: The Secretist, Part One 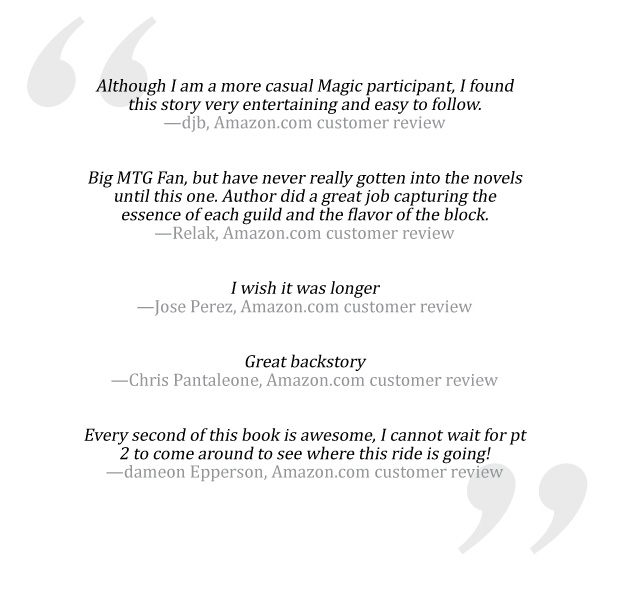