elcome to Gates Week, where we'll be talking about the common dual land cycle from the Return to Ravnica block. I already explained how they got designed during Return to Ravnica previews, so I decided to use this theme week to explore them from a different context. I often use this column to look at large holistic macro issues, but sometimes I like to do the opposite and give all the details I can on a very small micro issue. That issue today: the design of the common dual lands.

Before I jump into the meat of the issue, let me start by defining a term and explaining some of the parameters to the problem. When I say "dual land" I mean a land capable of tapping for exactly two different colors of mana (every once in a blue moon, a "dual" land will tap for three colors of mana, but we've never done that at common). Dual lands are done at common only in sets where multicolor plays a substantial role. 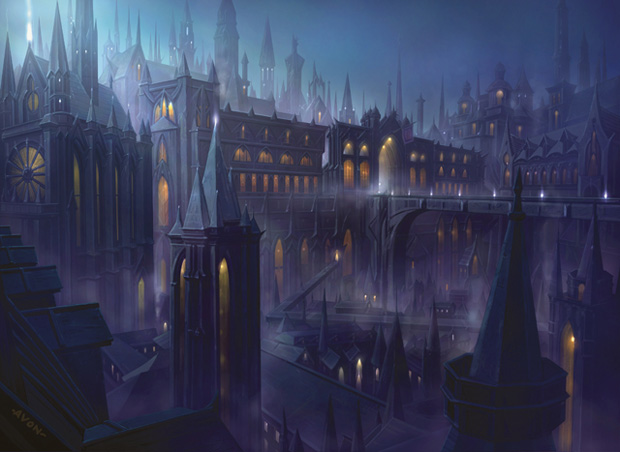 The parameters for duals lands at common are as such:

Back in 2003, I wrote an article entitled "This Land Is My Land," where I laid out the rules for land design. I'm going to hit the highlights here but please go and read it if you want more detail behind any of these rules. Here are the rules I laid out: 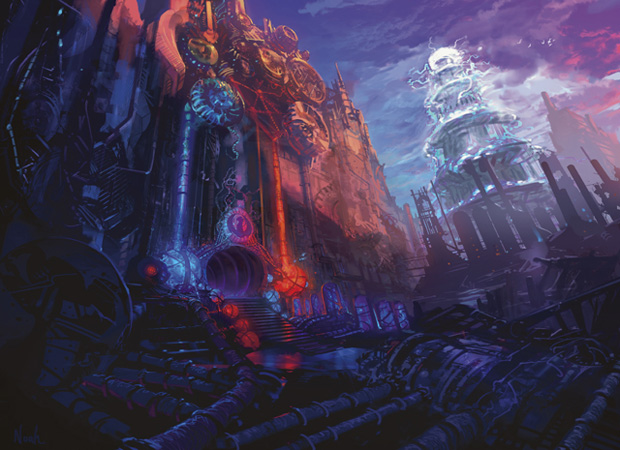 Applying these rules to common dual lands, we get the following sub-rules:

Many years back, R&D started using something we call New World Order. (Note that I am NOT referring to New New World Order, which was an April's Fool's joke.) In short, New World Order was a simplifying of commons to make the game easier to learn for new players. The deeper complexity was pushed up to the higher rarities. What this means for common dual land design is that it adds some more restrictions:

The biggest impact of New World Order is that it's yet another thing that limits what options we have available. I often talk about how commons are the hardest cards to design. The reason this is true is because common cards have so many more restrictions placed upon them. Luckily, restrictions breed creativity, so this problem forced us to get creative.

Dual lands are a tricky thing in that we do them at every rarity save mythic rare. What this means for common dual land designs is that there are some things we cannot do, not for complexity reasons, but because certain dual land mechanics have been established over time at another rarity. If that previous rarity was uncommon, we can have a talk because, from time to time, we'll slide mechanics down a rarity, but if the cycle was at rare, then it's off limits to common. 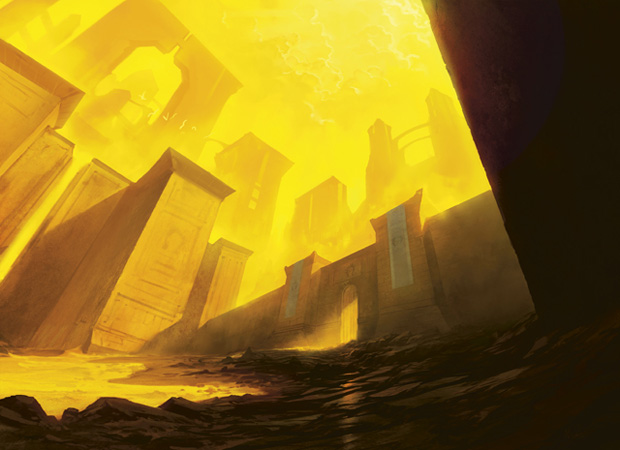 The reason I laid out all the restrictions first is I want you to understand the complex web of issues R&D faces every time we try to make a common cycle of dual lands. Sometimes, the challenge of design is facing a blank white piece of paper where anything is possible. Other times, it's facing an avalanche of restrictions that hugely limit your options.

Okay, what are the nonnegotiables for a common dual land cycle? I stated them up above. It has to produce exactly two colors of mana. It has to be part of a five-card cycle. It has to have a drawback. Of these three restrictions, the most restrictive is the drawback. That means it's the place for us to start. (By the way, that's a great rule of thumb for any design. Start with the part that's the most restrictive because you want to give that component the most freedom and it will help you define what the set will need, structurally.)

What drawbacks are available for land? Let's examine them one by one: 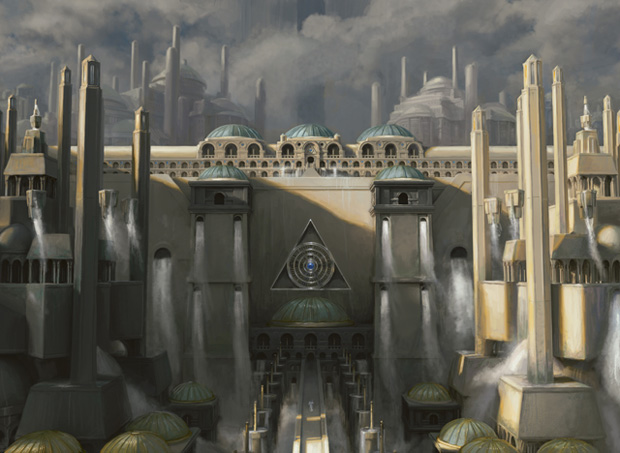 After examining all the options, here's what we're left with once we take out the things that aren't allowed at common:

The next thing one has to always look at when making common lands is what other lands are going to be in the set. In particular, as we are looking at dual lands, what other dual lands does the set have? That was an easy question for Return to Ravnica to answer because, from the very first day of Return to Ravnica design, the shocklands from the original Ravnica block were in the file.

You see, the baseline for "enters the battlefield tapped" lands are what are known as the tap lands from Invasion block. They were uncommon dual lands that simply entered the battlefield tapped. When looking for dual lands at common, the tap lands are always the place we start. They are a little on the weak side (although they do sometimes see tournament play) but they are the absolute simplest dual lands one can do at common.

The issue is what we in R&D call a "strictly better" problem. Strictly better is a term we use to mean that one card is, in most reasonable cases, better than another. The classic example would be Lightning Bolt versus Shock.

Magic does strictly betters all the time. Card power is in flux and we make cards that are strictly better than other cards as a routine part of doing our business. Usually, though, we try to avoid it in the same set (although even that happens from time to time) and we especially try to avoid it when one of the cards is high profile. What this meant was that we felt printing common tap lands would create a negative reaction from the players because they compare so badly to the shocklands sitting in the set at rare.

We spent a little time looking at doing filtering instead of producing mana, but playtesting showed that a set with the gold percentage as high as Return to Ravnica really wanted straight-up mana production. If you glance up above, you'll realize that this really only left "enters the battlefield tapped" lands (ETBT lands) as the sole viable option.

Here's what we knew: We wanted to have common dual lands that entered the battlefield tapped. There was enough room, both in power and text space, to have one ability. What should that ability be?

I often talk about doing blue sky design where we try to come up with things we've never done before. Other times, like this one, you start not with the unknown but with the known. What ETBT lands with an upside have we made?

The Refuges (aka the Life Duals) from Zendikar 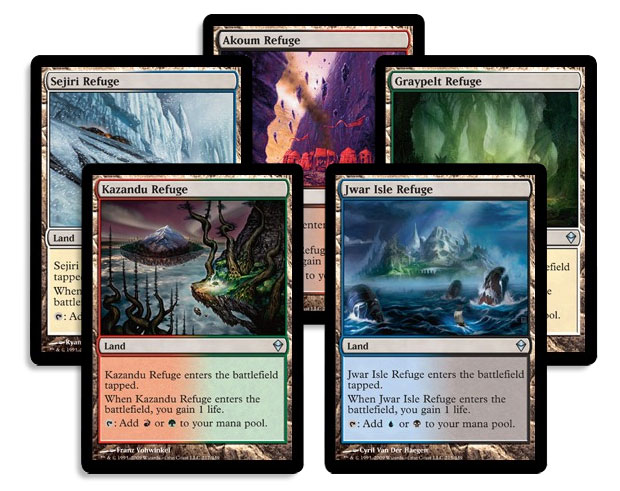 This cycle of ETBT dual lands had the controller gain 1 life. It was about as simple as ETBT dual lands can be. It had been done at uncommon in Zendikar but we felt we could push it down to common if necessary.

The Snow Duals from Coldsnap 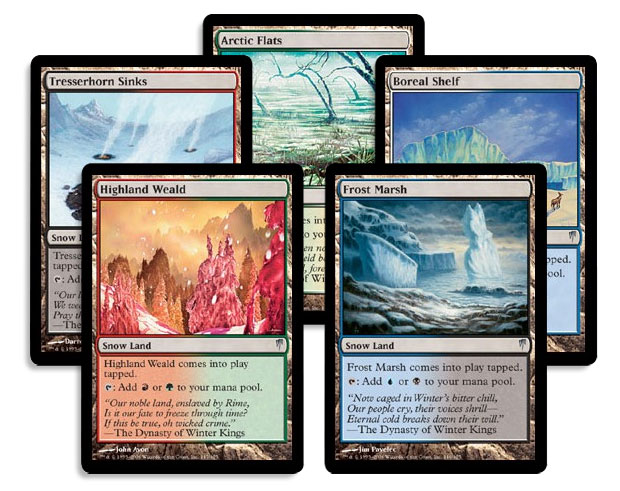 This cycle of ETBT dual lands has the bonus of being a supertype, in this case snow. Now, snow lands don't work for Ravnica but it did put the supertype (and subtype) option into the back of our brains. This will obviously be important.

The Creature Duals from Worldwake 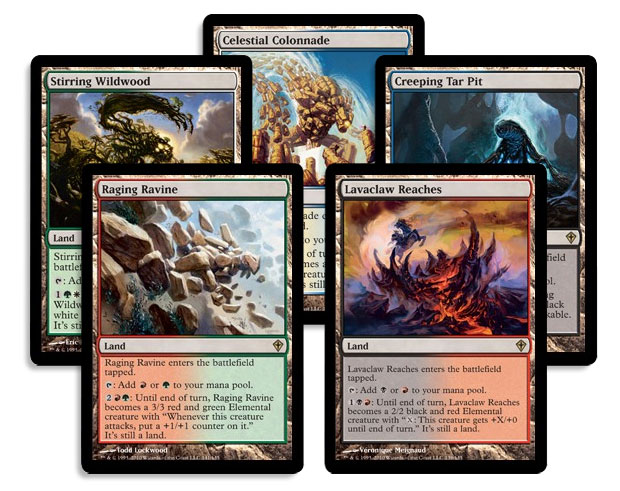 This cycle of ETBT dual lands has the bonus of the lands being able to turn into creatures. This was a rare cycle, so it's highly unlikely we'd ever drop it all the way down to common for both Limited and complexity reasons.

The Tri-Lands from Shards of Alara 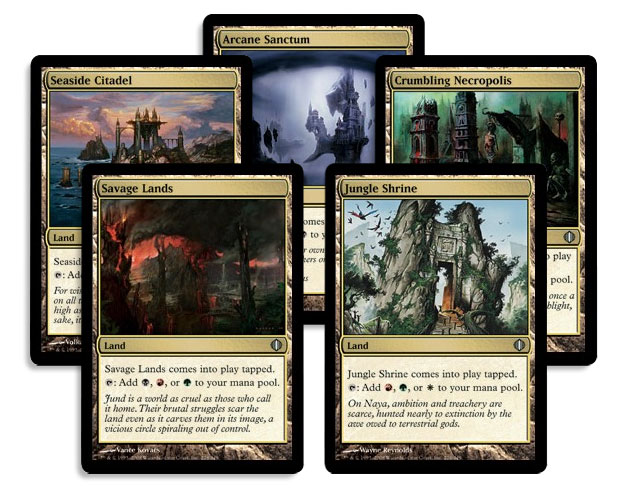 You could think of this cycle as being an ETBT dual land cycle where the bonus is the availability of a third color of mana. Obviously, as Return to Ravnica block was all about two-color guild identity, this cycle wouldn't fit. I've included it more out of being thorough. Usually, when design does research, we want to see everything, even things that might be a little off the beaten path. Sometimes bad ideas are stepping stones to good ideas.

And that's all the ETBT dual lands we've done. We continue our research with other dual lands that have simple riders.

The Conditional Lands from Core Sets and Innistrad

These are dual lands (two cycles from different sets) that enter the battlefield tapped unless a condition is met—in this case, a basic land on the battlefield of an appropriate color. They're on the simple side but not exactly ETBT duals. Both cycles were done at rare so, again, it's unlikely we would do these at common.

The Reveal Duals from Lorwyn 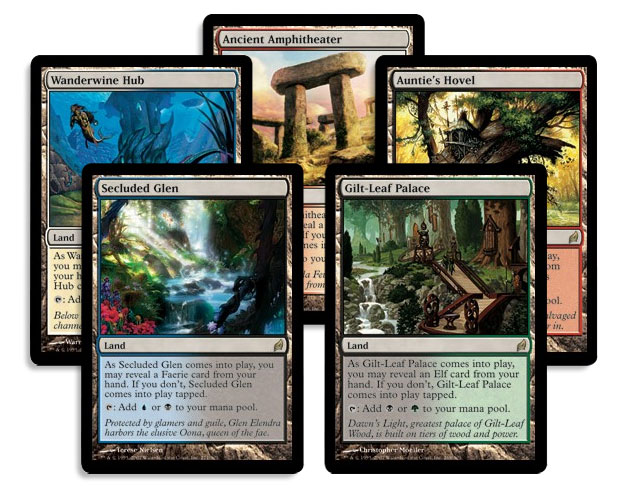 This cycle is much like the last in that it requires a condition to avoid entering tapped. In this case, the condition is revealing a card with the appropriate creature type. Again, this cycle is rare and thus not a good candidate for common.

The "Karoo" Lands from Ravnica block 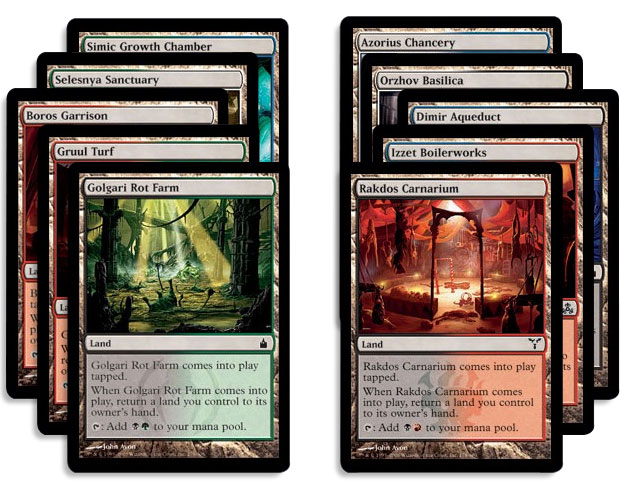 This is the common dual cycle from the original Ravnica block. They have the advantage of being named for Ravnica but R&D didn't want to use them for various reasons. First, and most importantly, development felt they were too good for Limited. Second, we were already bringing back the shocklands and didn't want all the lands to be reprints And third, these lands predate New World Order and are a bit complicated for common.

So after doing all our research, we got the following options :

We talked about how the life lands contrasted against the life payment of the shocklands. We tried to design new options. We talked and talked about the problem but we weren't finding a solution.

One day, we decided to use one of our Card Crafting meetings to talk about the problem. We explained that we had searched and searched and hadn't found a new solution to the problem. What if we just did the tap lands? How would R&D feel about that? Many of R&D strongly disliked the tap land option. At one point, Zac Hill spoke up and said, "What if we just made up a new subtype and then made some cards to make it matter mechanically?"

The room went quiet as everyone kind of looked around. Doug Beyer spoke up and said we could probably tie the subtype into the guilds. He talked about how each had a gate leading into its area. Hmm, gates. We hadn't thought about using cards in the set to help set apart the ETBT common duals lands from the shocklands. It just might work. We left that meeting with the idea of gates and never looked back. 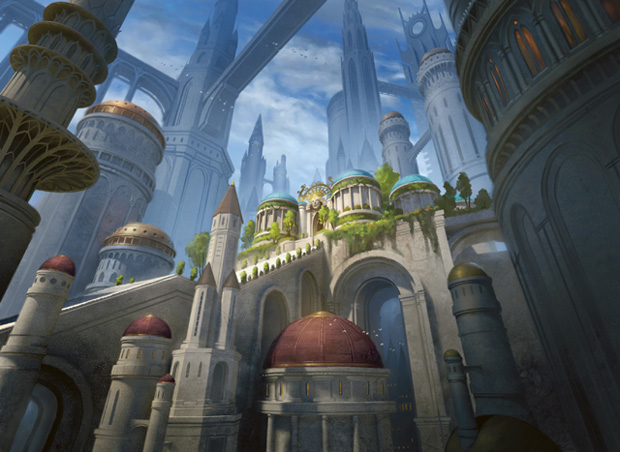 I often talk about the big picture stories of design but the little pictures take up much of our time—if not the majority. We agonized over this problem for months. I hope my article today gave you a little insight into all the things that went into solving this problem. As always, I would love to hear your take on our solution. Did you like it or would you have preferred a different solution? Drop me an email, join the thread, or contact me in social media (Twitter, Tumblr, and Google+). I want to know.

That's all for today. Join me next week when we start Modern Masters previews and I talk about one of my favorite things.

Until then, may you sometimes think small.

Today's podcast is the third and final look into the design of Future Sight. Today, I talk about the many cycles that were put into the set.