ragon's Maze is coming out soon, and with it there'll be an updated set of policy documents (Infraction Procedure Guide, Magic Tournament Rules) covering how Competitive and Professional REL tournaments are run. We try to highlight important changes on dailymtg.com before the full release, and so we're back to announce (and provide some explanation for) a new change.

We've been seeing a big increase in appeals that seem, frankly, frivolous. We respect that players should have the right to have a second opinion from the top, but after being called over four or five times to say "yes, that's how Thragtusk works" or "No, they didn't miss their trigger" to the same player, we wondered if there couldn't be a more streamlined approach that provided a check on rulings without being causing excessive work for the Head Judge.

We looked at how other professional organizations handled it, and were inspired by football. As a sport, they have a lot in common with Magic, right down to both having a red zone. Their system of challenges seemed perfect for what we were looking for, and it seems to have been entirely successful in its first few years of existence.

So, I'm excited to introduce challenge flags to competitive Magic play! Each player has the rights to issue two challenges to judge rulings over the course of the tournament (as a spectator playing in the event, too!). If both are successful, they get a third.

Organized Play has been tremendously supportive of our efforts here. As more and more Magic gets streamed into thousands of houses worldwide, they've been looking for ways to make the game more exciting. Aside from the drama of a game winning Lightning Helix off the top, we think throwing a challenge flag will quickly become one of the more exciting visuals to come out of premier event coverage.

We're also hopeful this will also bring a new layer of strategic depth to the tournament. Is this a good time to challenge? Should I wait for something possibly more significant? With a failed challenge adding time to the clock that will only get used at the opponent's discretion, is the risk of a failed challenge worth giving them that strategic advantage? These decisions – which must be made quickly – provide a moment of tension for both players and spectators, and it'll be interested to read varying takes and philosophies from Pro players as to when and when you shouldn't be throwing the flag.

Players are allowed to bring their own challenge flags, but we know there'll be a good number who want to properly represent their guild, so we're excited to announce a line of guild-affiliated challenge flags available at MTGMerch.com so that you can rock your guild flair. But we won't be the only place for official challenge flags, we will provide official specifications for challenge flags such that our partners and fans can make their own. Don't forget, the Head Judge at each event has final say as to whether a player's choice of challenge flag is appropriate and tournament legal. 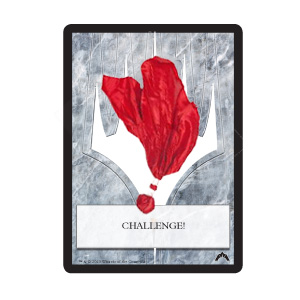 If this new rule is a success, we think there are several other things we can take from sports such as American football to make Magic more appealing and dramatic. There's already a pilot program underway to enable judges to issue rulings and communicate across event halls through a series of hand signals.

Below you'll find the full rules for challenge flags. Our trials showed that it reduced appeal burden to judges by more than 17% at local PTQs, and slightly less (14.7%) at Grand Prix events. Thanks to everyone who helped take part in the experiment - throw those collectable beta-tester insignia flags with pride!

So we look forward to hearing your thoughts. Are you ready for some Magic?!

At Competitive or Professional REL, if a player disagrees with the ruling of a floor judge, he or she may throw their official challenge flag.

A challenge will be referred to the Head Judge, who will make a new ruling without knowledge of the original ruling. The Head Judge will then issue their own ruling, followed by determining if that ruling overturns the ruling made by the responding judge. If the Head Judge is the floor judge, no challenge flag may be thrown.

Players are allowed to throw up to two flags in a single tournament. If both challenges are overturned, they gain the right to throw a third flag. Spectators enrolled in the tournament may also throw a challenge flag on any ruling if they still retain the privilege. As an exception to this, only members of the coverage team may throw challenge flags during a Professional REL Top 8.

If a challenge flag is thrown before the floor judge has made their ruling, the player throwing the flag forfeits their right to a challenge, but is still charged with one.

Challenge flags are be presented at the start of the match, along with the deck and sideboard. A tournament official may disallow the use of certain challenge flags that may cause confusion, are deemed offensive, or are inappropriately weighted. The Head Judge is the final authority on flag appropriateness.

And if you're reading this, be sure to check the publication date.