"Grandpa, can you tell me the story again?"

"Little one, I've told this story a thousand times."

"Okay, get into bed. A long time ago, in a game far far away, our people lived in peace. We were a simple folk. We had our Merfolk of the Pearl Trident. We had Lord of Atlantis whom, although he wasn't one of our kind, we followed. Our deck was straightforward and easy to play. Our people were not powerful but we were beloved nonetheless.

"Then came the first hardship. While it might seem pretty insignificant now it was a big deal when it happened. The gods issued an edict known only as "The Four-Of Rule." You see, we didn't have the resources of other races. We were a simple folk with simple means. There were those that tried to make use of the shapeshifters to strengthen our ranks but the harsh reality was that we were being cast aside.

"But then in the darkest day came our first savior. He was a killer, 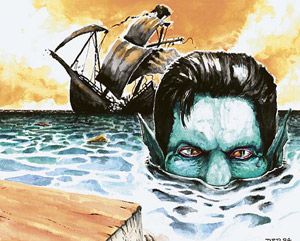 , but our people needed him. We did not have the luxury of choosing our ranks. He brought with him 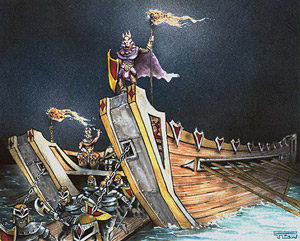 , one crafted for war. We regrouped and tried once again to fight, but our ranks were still too small.

"And then following this dark time came a ray of light. Ironically, it took the falling of an empire for our people to finally rise."

"Yes, little one. Our salvation came from the shores of Vodalia. Vodalian Mage, 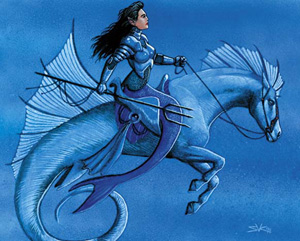 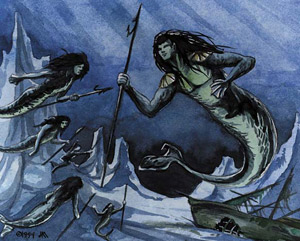 , Vodalian War Machine... they all arrived to fill our ranks. But sweetest of all was Seasinger whose singing was as melodic as the sea itself. With her on our side, the others began to take notice. But just as fate gives, so does it take away. The next year was thin, with only one new recruit to show up on our shores. Ironically, it was Benthic Explorers.

"It was then that our people realized that we needed to migrate if we were to survive. So we headed off for the shores of Jamuraa. While we did find some more of our people, they were rather weak. They didn't have what we needed to put together a proper army. So we kept traveling, this time to the shadow plane of Rath."

"Yes, to Rootwater. Our cousins there were of a hardier stock. Our people started showing signs of strength. Others began to give us the respect that had eluded us for so long. This was followed by a year-long drought, and as you know, our people do not like droughts. There were a couple of new recruits, but not the kind of thing that changed anything.

"With nowhere else to turn, we were forced to Mercadia. While others suffered, fate was kind to us, and we thrived. Then came the invasion. Once again, as others faltered, we grew stronger. We had some odd unions and even odder offspring, but never before had our people shown so brightly. The world was almost at our fingertips. But as is often the case, the sun shines most brightly just before it is darkest."

"That doesn't make any sense, Grandpa." 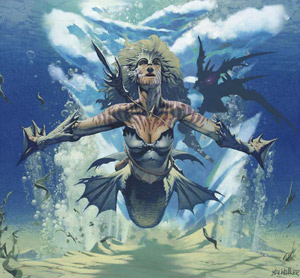 "Little one, you are not supposed to question the story."

"But Grandpa, the sun is brightest at noon when it is the highest in the sky. The sky is darkest in the still of night. That is many, many hours later."

"Yeah, by definition of brightest, darkness must follow. It gets darker."

"Little one, do you want to hear this story?"

"He is coming, little one."

"Where was I? Oh yes. Our people were living in a golden age. All seemed perfect. Little did we know the great tragedy that was to follow.

"It all began with the trickster god."

"The trickster god has always been very kind to our people. Yes, he was responsible for his share of mischief—when you are older, I will tell you the story of Gaea's Skyfolk who were seduced by great magic—but in his heart he cared greatly for our people. Still he was a trickster god and he did what all trickster gods do. 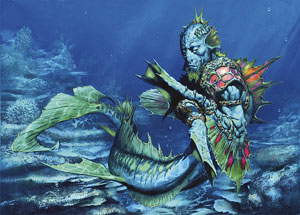 "In one fell swoop he made everyone forget our kind as well as that of the elves and the goblins. As part of the cruelest joke, he replaced us with squids. Squids. It was the low point of our people. Our leader, the great

, fought back. He tried to be the voice for our people, but the gods would not have it. They cast him in the role of villain so that no one would heed his words. Once he was gone, the gods acted as if we had never existed."

"Why would the trickster god do such a thing?"

"Because it is the way of such a creature to create havoc wherever he goes. Many believe it is he who will spell the end for all the multiverse."

"But I thought he was good."

"No god can be thought of in such simple terms."

"I heard he was responsible for saving the whole world, multiple times."

"He saves it, he attempts to destroy it. His motives seem to change week from week. Do not try to understand the trickster god. His thoughts have been collected on many scrolls. Many, many scrolls. But few can comprehend a mind as unbalanced as his.

"So our people were under attack, not from outsiders but from the gods themselves. Once they ensured that no new members of our kind would be discovered, they started erasing those of us that already existed. What was once one of us would become Coral Eel or Fugitive Wizard. The very foundation of our existence was under attack."

"We did very little. We just disappeared one by one. But just as thing were at their darkest, we found the most unlikely of allies: the trickster god himself." 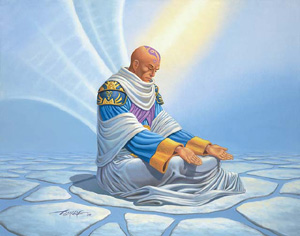 "There are many stories. My favorite is that the people prayed. They brought forth their voice to let the trickster god know they were unhappy. And the trickster god listened. You see, he doesn't have the time to answer most of the prayers, but he does listen to them all. The trickster god realized that he had unwittingly led our people to extinction. But he listened to the prayers, and he vowed to set things right."

"And that's how our people came back?"

"Not yet. The trickster god had some problems. There is a lot of inertia in the pantheon of the gods, and once a ball gets rolling, it is mighty hard to stop. To make matters worse, this ball was metaphorically on a steep hill. With each strike against our people, our return seemed less and less likely. Luckily for us, the trickster god is quite stubborn. He was not willing to let us go."

"But he is powerful and can move mountains, right?"

"Well... There were others that he cared about with great passion, like the tiny squirrels or the wily beebles, and despite his best efforts, they had remained in the big tree in the sky. But as the saying goes, 'Stubborn men,' or in this case gods, 'see only opportunities and never obstacles.'

"So the trickster god started doing what trickster gods do. He got tricky. He started by finding allies among the gods. He realized that he was not alone in his affection for our people. Next, he laid the groundwork for a world that was defined by what once had been. If he couldn't find a place for our folk in a new world, he decided instead to craft an old one.

"That got a toehold for our people to return. And he fanned the favor of the gods who were sympathetic to our cause. But all of his plans were moving towards a much grander scheme. You see, among the gods was a storyteller god in whose mighty book each race's tales were told. Without the approval of the storyteller god, our return was doomed to failure.

"The trickster god understood this, so he maneuvered the environment to make a point of our return. Following this world of old came a fresh young world focused on the creatures themselves. Surely, such a place longed for a great reemergence of an exiled people. But the storyteller god was a stern one. So the trickster god did his little dance and made his little smile. Little by little he wore down the mighty storyteller god, who in his heart understood the prayers of the people. Finally, after the many years of the trickster's endless pleas, the storyteller god succumbed. 'Okay,' he said, 'they shall return.' 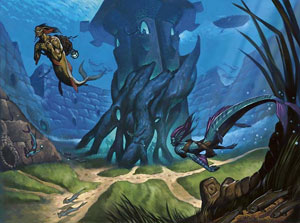 "And with those simple words, our people thrived once more. "

"And that is how the story ends?"

"This story is never truly over, little one. We must savor each victory and anticipate each new battle. Our people are patient, and with the prayers of the people behind us, we know we will never truly fade away.

"It is time to sleep now, little one. Rest your head and dream of our people. Wisps of blue, of white, of black. Perhaps even of green."