elcome to the first preview week for Arabian Nights! I kept saying there was more to come (and I didn't just mean Circle of Protection: Black and Volcanic Island), and today I get to give you a taste of Magic's first ever expansion. I even have a preview card that I'll get to before I'm done. I want to set it up first, so you'll have to wait a little before you see it. If you can't wait just scroll down and meet me in the next paragraph. Now that they're gone, I just wanted to say to all the readers that stuck around - I like you better. Really. Just don't tell them that.

Before we dive into all the goodies that Arabian Nights has to offer, I'd like to begin something that I plan to make a staple in "Making Magic" previews: I'm going to introduce you to the design team. Without further ado, here you go:

Richard Garfield - Richard is probably best known for, well, DESIGNING MAGIC! In his spare time, he's a math professor. Actually, I think in his spare time he designs games, but hopefully if Magic keeps doing well, he'll be able to dedicate himself full-time to game design. (Word on the street is he's currently designing another trading card game built around a certain popular roleplaying game - hint: think fangs.) I've never met a bigger fan of games than Richard. Every time I run into him at a con, he's always pulling out some new game I've never heard of (it turns out Germans really like board games) which is always quite fun to play. It seems only appropriate that Magic's creator take the first stab at an expansion. (By the way, there are numerous other expansions already in design - three that I know of and a few more that I've heard rumblings about.) As you will see, Richard never ceases to amaze. Arabian Nights definitely takes the game in some new, and exciting, directions.

Before I jump into Arabian Nights, I'd like to discuss an issue that's been rampant in the threads and my email. The topic: Does Magic need expansions? The sentiment was best summed up in a post in the thread to my column "Getting Ahead" (where I talked about where Magic design is headed over the next year) by a poster named taintedlace:

Obviously it's in Wizards of the Coast's best interest to sell expansions. That's where the money is. I don't even take offense at that. They've made a great game, they have every right to milk it. In fact, name any successful game and I can point to numerous expansions.

My issue is do we, the players, need the expansions? I love Cosmic Encounter, but I don't feel a need to buy any of the numerous add-on sets. You know how many AD&D books I own? Three. I've only bought one Trivial Pursuit game other than the Genus Edition and I regret buying it.

Yes, Magic will make expansions. It's a hot game. The real question is do we need them?

Let me begin by stressing that I do not work for Wizards of the Coast. I am a freelancer who writes for them. (Check out my Magic puzzles elsewhere on this very site.) Fact is, Richard would be writing "Making Magic" if he had the time to write a weekly column. But as someone who has designed a lot of games in his spare time I definitely understand where Richard is coming from.

Let me explain. The idea behind Magic in Richard's own words is that "Magic is a game bigger than the box." The point of the trading card genre is to make games where the responsibility of fine-tuning the details is left to the players. To do that, it's important that the players have a lot of choices. The more cards that exist, the more choices are available. For example, let's say I build a burn deck (a red-blue deck with a lot of spells and creatures that do damage directly to the opponent). In a forty-card deck with one-third land and artifact mana, that leaves about twenty-six slots for creatures and spells.

As I explained last month in my column on tournament play ("Tournament For Each Other"), there is a growing trend to limit each card to four copies per deck, which I am wholeheartedly supporting. Assuming we follow this guideline, what options does our deck have available? Here are the cards that deal damage that are available to us.

I know at first blush this seems like a lot of choices. But as someone who has built this deck, I can tell you it isn't. Many of the cards above are situational at best. Volcanic Eruption requires your opponent to have mountains, while Earthbind requires them to have a flying creature. Others like Creature Bond just aren't all that powerful. Very quickly, your options become limited. If no new cards ever entered the system, there would come a point where I basically figured out how to maximize the deck. It would take a while, sure, but I would eventually get there. Then what?

Build a new deck is the answer I would expect to get. Sure, I could do that. But eventually, I'd figure that out too. Meanwhile there are thousands of others doing the same thing. And some of these people are going to start sharing information. What this means is that eventually, the players will crack the game. They'll figure out what deck beats the other decks. At best, we'll end up with a rock-paper-scissors environment where players get to guess which of the good decks will show up at any particular tournament.

Magic is a game about discovery. If new things don't enter the system that discovery will be short-lived. With an ever-changing new influx of cards it can last a long time, maybe even longer than us. For most games, expansions are for flavoring. They allow players to tweak their experience. For Magic, expansions are its lifeblood. To reuse my shark metaphor from my column on the trading card game genre ("Booster Shots"), Magic can only live if it keeps moving. Its ever-changing nature is what defines it.

I know this is hard to see now as Magic hasn't even had an expansion yet, but it's something that was built into the very premise of the trading card game. As someone who has seen Arabian Nights, let me stress that it will definitely shake things up.

A Tale as Old as Time

Okay fine, Magic needs expansions. What does Arabian Nights have to offer us? Many things, some of which I can talk about today and some of which you're going to have to wait and see (either in the other previews on the site or when the set finally releases later this month). 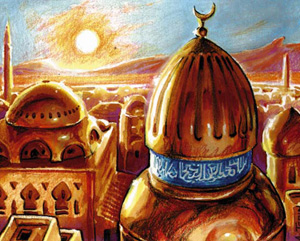 First and foremost, let's talk about the theme. This one shouldn't be too much of a secret, but Arabian Nights borrows its flavor from a real world source. Unlike Limited Edition, which mostly ventures into new areas (yeah, yeah, with a few influences from some famous fantasy sources), Arabian Nights takes its inspiration directly from the tales and legends of Persia (a.k.a. 1001 Arabian Nights).

Richard chose the Persian mythos because it is one that has always fascinated him. When Peter (Adkison, Wizards' janitor/president) asked Richard to design Magic's first expansion, Richard liked the idea of going to an existing world. He had just read a comic (Sandman #50 - the story was called "Ramadan" for those that like these minute details) that focused on the Arabian tales, and he felt it was a source material that hadn't been used too much in gaming.

What does this mean? Aladdin, Ali Baba, Sinbad - they're all there. (Check out the feature article to see what exactly Aladdin does.) In 78 cards, Richard explores many facets of 1001 Arabian Nights. From places to people to things, the set captures the heart and soul of what drew Richard to the mythos in the first place.

The set's dripping with flavor, but what does Arabian Nights have to offer in terms of game play? How is it going to shake up the status quo like I promised above? I'm glad you asked. 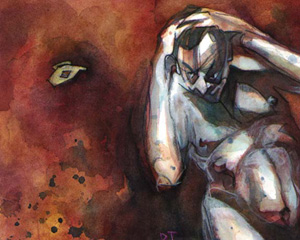 I think the number one defining quality of this set from a mechanical standpoint is that Richard didn't limit himself to what had been done before. For example, Arabian Nights has nine new lands. Want to know how many tap for mana? Four. What do the other ones do? Other things. Or how about this? Some cards don't always work when you use them. What do I mean? I mean, sometimes you use them and they do their thing and sometimes you use them and they don't. Why is this a good thing? You pay less. Get lucky and you'll get quite a bit more for less. (And don't worry, they all give you other chances if your luck is bad.)

Preview to a Kill

Wait, wasn't I supposed to show you a preview card? I was, so let's get to it. I chose this card because it does something that no card in Magic has ever done before (okay there is one card, but it's hard to use). Cards have danced around what this card does, but no card has ever done it with the simplicity of this card. Oh and by the way, it only has five words of text. Yes, this preview card is going to make your mouth drop open, and it's 20% the length of this sentence!

The funny thing about this card is that it started as a way to demonstrate an aspect of Persian life. Most of the cards from the set were inspired by finding ways to mechanically represent things found in the world of 1001 Arabian Nights. In trying to find how to do it Richard stumbled upon a very elegant and exciting idea. But enough of my teasing, let's get to it. When you open up Arabian Nights, you very well might be greeted by this card.

Yes, it's a Chaos Orb you don't have to throw. (Fine, fine, it can never destroy more than one thing, but it never misses either.) And it can destroy anything. Anything! Well, except for 1/1 Wasp tokens created by The Hive (plus two new tokens made by cards in Arabian Nights), because tokens aren't cards. And you thought The Hive couldn't get any better? (By the way, I finally opened one - man that took a long time to get.)

Before I let you go for today, I have a few more little teasers about Arabian Nights. Here are some cards you will see:

Eye for an Eye (and it's a white card!)
Flying Carpet
Library of Alexandria
Metamorphosis
Pyramids
Singing Tree
Unstable Mutation

Have I piqued your interest yet? If not, what are you made of? Stone?

That's all I got for today.

Join me next week when I let you take a peek at another Arabian Nights goodie.

Until then, may you learn to admire the shark.