Welcome to Commander (2018 Edition) Week. This week, we're showing off one deck per day, and today, we start with the blue-red artifact-themed deck. While I will be showing off preview cards from that deck, I decided to take my Commander 2018 article in a slightly different direction. Tomorrow, Gavin Verhey will be writing about Commander 2018's design and introduce the design team, so instead of doing that, I'm going to talk a bit about planeswalkers and how they've changed over time. (For those unaware, each of the Commander 2018 decks have a planeswalker that can be played as a commander—and yes, you'll see the commander for the blue-red deck before this column is over.)

Back in 2007, when Lorwyn came out, I wrote a two-part article about the design of planeswalkers. I went in great detail about why we decided to make them and the steps we went through to design the new card type. (If you haven't read those articles yet, be sure to check out parts one and two.)

While I will briefly touch on their creation in this column, this article is more about how the planeswalker card type has evolved mechanically over the years.

The idea all began in Future Sight design when design team member Matt Cavotta approached me with the idea for making planeswalkers a new card type. Time Spiral block's storyline had us revamping the power level of the Planeswalkers to allow us to make them a bit more approachable (characters with god-like powers were hard to relate to), and Future Sight was about peeking into the mechanical future of Magic. There had never been a more perfect time, Matt thought, to introduce planeswalker cards. As you see in the article linked above, the design team, including myself, was a bit skeptical at first—we tend not to make new card types very often—but Matt stayed strong and managed to convince us why we needed to do it.

We made a separate mini-team (Matt Cavotta, Mark Gottlieb, Brandon Bozzi, and myself) to work on designing planeswalkers to be introduced on the futureshifted sheet of Future Sight, but the versions we ended up with were a bit too robotic. There were three abilities that you rotated through each turn. Interestingly, this abandoned version of planeswalkers would be the inspiration for Sagas during Dominaria design.

We decided to push planeswalkers back until we had a design we liked, which ended up being in Lorwyn. (Tarmogoyf's reminder text in Future Sight did hint that the card type was coming.) The core of the Lorwyn design team (Aaron Forsythe, Paul Sottosanti, and myself) did the majority of the second half of planeswalker design. For far greater detail, you can read the two-part article about planeswalker design that I linked to above.

The first five planeswalkers to be printed are known as the Lorwyn Five: Ajani, Jace, Liliana, Chandra, and Garruk. We decided to start with a cycle of five monocolored planeswalkers that hit square center for each color. We wanted these first five planeswalkers to be iconic representatives of their color. Each of the Lorwyn Five had the same template. They had a +1 ability that did a smaller effect, a minus ability that did a larger effect (something they had enough loyalty to do when cast), and a bigger minus effect, what we call an "ultimate," that they had to build up to use. The one other innovation was Chandra, which was the first to have a -X loyalty ability. We had actually talked about pushing it off, but it played so well and was such a perfect character fit that we decided to leave it. The Lorwyn Five are the only planeswalkers to appear at rare, but that's only because mythic rare didn't exist yet as a rarity.

The original plan for planeswalkers was that they were going to be something special that didn't show up all the time. Lorwyn introduced the first five planeswalkers, then the next three sets (Morningtide, Shadowmoor, and Eventide) had zero planeswalkers in them.

Magic 2010 was the first core set to feature planeswalkers, but those cards were simply reprints of the Lorwyn Five.

Starting with Zendikar, we begin making planeswalkers an every-set occurrence. They were popular out of the gate, but we work two years ahead, so it wasn't until Zendikar that we could readjust to make sure that every set had at least one planeswalker. These three planeswalkers aren't particularly innovative, they just expand upon changes we'd already made: other versions of existing characters, narrower thematic focuses, etc.

From here on, I'm only going to reference planeswalkers when they do something new. The core sets continued to have a cycle of monocolored planeswalkers that mostly remained the Lorwyn Five but got tweaked every once in a while. Nissa would eventually swap in for Garruk, and Gideon replaced Ajani.

New Phyrexia brought Karn Liberated, which was the first colorless planeswalker, requiring only generic mana to cast. He also has the largest minus for a loyalty cost. We talked a lot about whether Karn was also supposed to be an artifact but decided that for developmental reasons, we didn't want that (too many shenanigans with artifacts); we decided that planeswalker-ness overrides other qualities. It's also why Ajani is not a Cat, for example. (The one exception for subtypes is planeswalkers that turn into creatures gain a subtype while a creature.)

A quick aside about the static ability: Planeswalker has become the most popular card type. It is also the card type with the least amount of design space, so in my role as head designer, one of the things I've championed has been slowing down the evolution of planeswalkers to make sure we're "squeezing all the toothpaste out of the tube." Because of this, the static ability on Garruk Relentless was a bit contentious. I've been trying to hold back on planeswalker static abilities, as it's something I didn't want us rushing into too quickly. After much discussion, we decided it was okay on Garruk because it was so tied to his transformation, which felt unique to a double-faced planeswalker.

Sorin, Lord of Innistrad from Dark Ascension was the first printed planeswalker to produce an emblem. Emblems are an enchantment-like ability that sits in the command zone. Emblems have no color, name, or card type and currently have no way to be destroyed. (And it's not something we have any immediate plans to do; emblems require so much work to make, we don't want to make them easy to deal with.) The first emblem was actually made retroactively for Elspeth, Knight-Errant from Shards of Alara as a rules fix for the card. Emblems are used solely for planeswalker cards and are printed on cards like tokens, but usually at low frequency as they are created only by planeswalkers (which show up at mythic rare).

Tamiyo was the first time we obviously introduced a planeswalker from a known plane (she's from Kamigawa) who was a visitor to the plane we were on. There are characters that we later revealed to be from known worlds (such as Liliana being from Dominaria), but it wasn't a known thing when they were introduced. Tibalt was our first attempt at a two-mana planeswalker, considered developmentally to be a big miss, as we were timid about pushing such a cheap planeswalker.

While -X loyalty costs existed since Lorwyn, Gideon, Champion of Justice was the first planeswalker to have essentially a variable positive loyalty ability where he could gain a different amount of loyalty depending on how many creatures the opponent controls.

Dack Fayden was the first planeswalker to show up as a new card outside of a Standard-legal set. Commander (2014 Edition) would be quick on its heels, later that year, with five more.

Each deck in Commander 2014 was led by a planeswalker that had the ability to be a commander. This cycle of five cards is the second case of planeswalkers having a static ability (interestingly, listed at the bottom on these cards). These cards had a couple firsts. One, they were the first planeswalkers you could play as commanders. Two, Freyalise was the first dead character to show up on a planeswalker card. (The fates of both Nahiri and Teferi were unknown at the time, but we've since learned they're alive.) This opened up the door for future planeswalkers of dead characters in supplemental sets (one of which you'll see later this week). Teferi is the first card to allow planeswalkers to use more than one loyalty ability in a turn.

With the release of Kaladesh, we introduced Planeswalker Packs, a new tweak on preconstructed decks aimed at newer players. While we've made new content for preconstructed decks before, this was the first time we made new planeswalker cards. These cards were created at higher mana costs and were designed to not be relevant in Standard (as all the cards in the deck are Standard-legal). Both Chandra and Nissa had alternate versions of planeswalker cards in Kaladesh itself. The Planeswalker Packs only come with one copy of the planeswalker, but they also have a card that has an effect and then lets you tutor for the planeswalker (get it out of your library and put it into your hand) to essentially give you a second chance at drawing it.

Which brings us to the planeswalkers of Commander (2018 Edition). Two of them are brand-new characters. One is a dead Planeswalker from long ago. And the final one is a new incarnation of a known Planeswalker. (That's the one I'm going to show off today.) All but today's are three-colored.

Now that I've revealed that today's planeswalker is a known Planeswalker, you should be able to figure out who. I said up front that today's Commander 2018 deck is a blue-red artifact-themed deck. Who better to lead it than 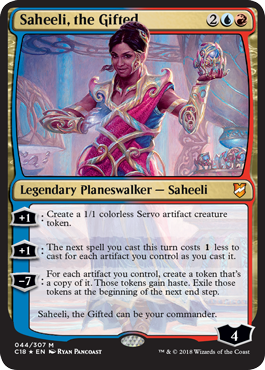 Saheeli. Like the original Saheeli Rai, Saheeli, the Gifted is designed to be played in an artifact deck. In fact, if you remember back when Kaladesh came out, many players expected a blue-red artifact-themed legendary creature, but instead got a blue-red artifact-themed planeswalker. Jhoira eventually filled that slot in Dominaria, but Saheeli came back to also fill the slot she knocked out of the set the first time around.

But wait, there's more. How can I preview an artifact-themed deck without showing off an artifact? Here is an artifact designed to play nicely with Saheeli, the Gifted. 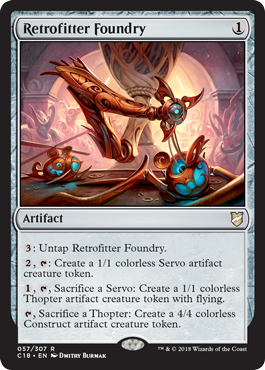 This artifact allows you to keep upgrading your artifact creatures, including the Servos made by Saheeli.

I hope you had fun looking through the history of planeswalker innovations. A lot of neat stuff has happened, but a lot of cool stuff is still waiting in the wings. Speaking of new stuff, stick around all week as we show off a new deck each day—including the planeswalker that commands it.

Join me next week for my mailbag column on Core Set 2019.

Until then, may you dream of cool new planeswalker innovations.

This podcast is part three of a six-part series on the design of each and every non-Contraption card in Unstable.

For the 25th Anniversary Grand Prix, I recorded a video with Richard Garfield and Peter Adkison. This podcast is all about the day I spent shooting that video. I also talk quite a bit about the early days of Magic.