elcome to the feature article on the Jace vs. Vraska Duel Deck! Jace vs. Vraska is the second Duel Deck I worked on after doing some polish work on Heroes vs. Monsters. Duel Decks are one of the products that I have always enjoyed from Wizards of the Coast, and one I am honored to be involved in. I probably played a hundred plus games of Jace vs. Chandra, and was excited about the opportunity to try to sculpt a fun and interesting matchup between two of our characters using cards from throughout the past.

We create the Spring Duel Decks to feature two Planeswalkers from the previous block. The challenge that came up for this one was that the lead-in to Ravnica was Izzet (UR) vs. Golgari (BG), and the Theros lead-in was Heroes (WR) vs. Monsters (RG). That just left Jace as the Planeswalker whose color hadn't seen a recent overlap. This wasn't all bad though—it gave us an opportunity to revisit one of the more iconic characters, one who was central to the Ravnica storyline. Revisiting Planeswalkers for Duel Decks was also something that was going to happen eventually—our stories feature some of our regular players, and it will be often correct to highlight them.

Of the remaining options for foils to Jace, Vraska fit the best both thematically and structurally. While Vraska fell into Golgari colors, her character wasn't nearly as tied up in a Golgari-style deck as, say, Ral Zerek was tied into an Izzet deck, or Domri to a Gruul deck. It also let us highlight the conflict between Jace, a master investigator, and Vraska, who lives her life in the shadows.

Once we decided on these two characters, I sent Chris Millar (who does the design work on all of our Duel Decks) some basic outlines, and after some time, he sent back lists that I started developing.

Vraska is the queen of the underworld, contracting assassins to kill off her enemies, which isn't to say that she doesn't have the stomach or abilities to do it—she just doesn't feel the need to take on every job personally. If Vraska does decide to take your life into her own hands, though, there is nowhere in the multiverse where you can run to escape her gaze. 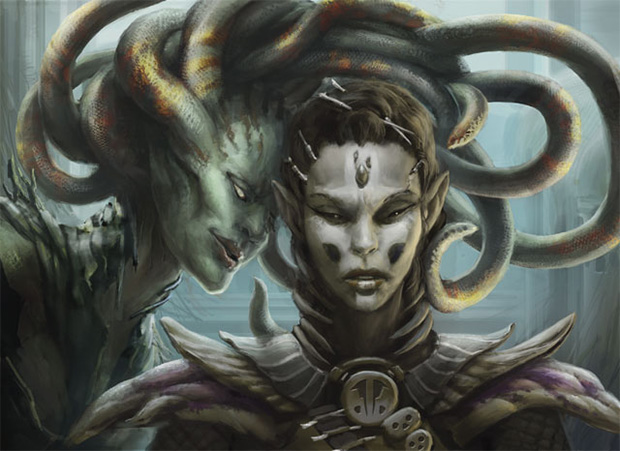 They key, I felt, to working on Vraska's deck was ensuring it wasn't a Golgari deck, but instead a more traditional "rock" deck, or Black-Green attrition. Vraska doesn't plan on using the graveyard to gain an advantage, but instead plans on using a combination of discard and 2 for 1s to get the upper hand on Jace. She has by far the stronger removal between the two decks, as well as Morbid to take advantage of opponents.

The deck has several ways to pay life—Putrid Leech and Night's Whisper (both of which received alternate art for the Duel Deck), as well as Underworld Connections, were important to give Vraska the opportunity to challenge Jace at card advantage—but this comes with a cost. While Vraska can use Last Kiss, Stonefare Crocodile, and Highway Robber to regain some life, it can be very easy for Jace to put so much pressure on Vraska that she can't keep paying life.

Jace has grown up significantly since we first saw him on Lorwyn. No longer enemies with Chandra Nalaar, he has learned the importance of working with other Planeswalkers for the greater good. Jace has taken on the great responsibility of being the Living Guildpact and the job of protecting Ravnica from threats both internal and external. 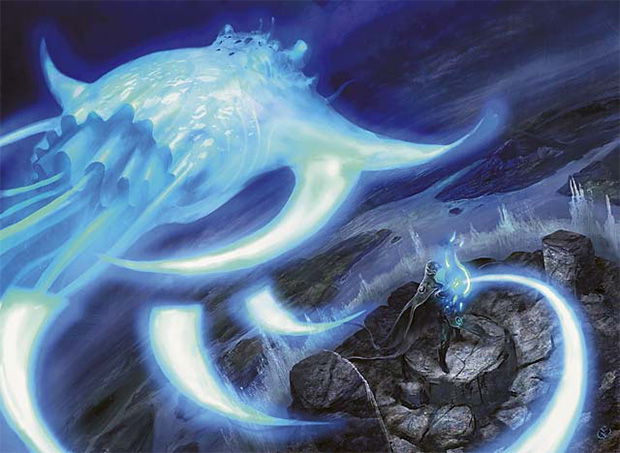 One of the important things to me about revisiting a character like Jace was avoiding making the deck a complete 90 degree turn from what the original Jace deck was doing in Jace vs. Chandra. I thought it was important to include some of the original elements of the deck—like the suspend creatures Riftwing Cloudskate and Errant Ephemeron—but to also show how Jace has evolved as character—removing the morphs from the original deck and putting in some light Illusion tribal elements.

Early versions of the deck included a bit more milling and mill rewards, which worked out because Vraska's deck wasn't graveyard focused. However, the playtesters found this unsatisfying, so I tried to build the deck as more of a traditional control deck using tempo and counterspells to overcome Vraska's powerful magic. I kept some fun interactions like the ability to mill a spell that has been Memory Lapsed and Spelltwine, but cut down the number of Jace's Phantasms and Crosstown Couriers. I also made the decision in deck building to keep the counterspells in Jace's deck more temporary or conditional rather than having them be hard counters—hence why you see the cards like Remand, Prohibit, and Memory Lapse instead of Counterspell. I found that this gave the Jace deck the more tricksy and elusive feel that the character has moved toward since we first saw him.

When working on this Duel Deck, I tried to position the decks in such a way that the matchup between them was something that was strategically deep and allowed for both decks to have early and late game strategies. When choosing mechanics for the matchup, I decided to give both decks Kicker to let them have plays in the early and late game. I definitely didn't want the entire game to come down to whether one deck survives until turn 7, at which time it would have a tremendous advantage. Instead, both decks can take the game over at any point.

Rather than just set up Jace as a hard control deck, I wanted him to be very tempo-ish. Many of the individual cards in Vraska's deck can be hard for Jace to deal with, unless he is able to properly time both his removal spells and his countermagic. Memory Lapsing or Remanding a spell with Morbid to keep the bonus from occurring can be one of the most important things to Jace's victory.

For the Vraska deck, the goal is to keep the Jace deck from getting the maximum value of its tricky cards. Playing a Putrid Leech on turn 2 often means that Vraska can put enough pressure on the Jace deck that it doesn't have time to try to make tricky plays. Vraska is just as comfortable playing the control deck in the matchup as the aggro deck, however. Her discard and removal suite means that she can deal with Jace's fastest draws, and cards like Reaper of the Wilds and Drooling Groodion can be very hard for the Jace deck to deal with.

I hope you all enjoy playing these Duel Decks as much as I enjoyed making them. I would love to hear feedback about them from you all.