hich of these cards is better?

Especially newer players probably all gravitated toward the no-downside white 2/1 creature. Surprisingly, for practical purposes, Jackal Pup was much more successful than Savannah Lions in almost every competitive format, for quite some time! White didn't have the support cards to get its 2/1 through, whereas red didn't (at least necessarily) care about a potential life point downside very much. The many cheap burn cards in red helped get the hideous, woefully flawed, Jackal Pup through, for lots of damage, when the seemingly much stronger white version would be scared, sitting at home, for fear of tussling with a 2/2 first striker or simply a larger creature.

Just as we can't say that a Lightning Bolt is always better than a Tidings, the question of Savannah Lions and Jackal Pup was not strictly one way or the other every time.

As you progress to putting together your own ideas and building more and more effective decks of your own, one of the tools that will serve you well is the ability to recognize the criteria that makes some cards "always" better than others (so you can pick them). We call this concept strict superiority.

Let's take a moment to revisit my dilemma about Gray Ogre in last week's "[Common] Casting Costs." We said that one of the things that made Gray Ogre an eyebrow-raising card choice was that there were more, better, options for the same cost. This is one of two broad drivers of strict superiority.

I. More Value at the Same Cost

A moment ago we said that Jackal Pup was oftentimes the more effective card when compared with the no-downside white card Savannah Lions. Is this because dogs (or Hounds) are so much better than Cats? No... it was more a question of cards that surrounded them. One color had ample support cards to force through what is—on the battlefield, anyway—a clearly inferior body. But what if we sift through the sands of history and compare the 1998 All-Star with the 2013 model?

Jackal Pup, on the other hand, is a pitiable and generally ineffective chump blocker.

The additional value of Firedrinker Satyr's pump ability against Jackal Pup, with no such bonus, is a common expression of strict superiority.

We can say Firedrinker Satyr is better than Jackal Pup almost all the time.

Soldier of the Pantheon is strictly superior to Elite Vanguard.

Generally speaking, you want to pick the strictly superior option when making your deck; this is not always the case (and we will get into that in next week's "Redundancy"). But just identifying when one card is better than another (probably not very good) card is not really a tough task. Remember last week?

I would concede that it stinks when you have Have HAVE to put a body on the battlefield and you end up blowing up your own artifact... but that doesn't change the fact that Manic Vandal is quite a butt kicker when it's good—whereas Gray Ogre is consistently worse than almost everything else you can play.

To wit, Suq'Ata Lancer can get in there. It is tough to find a realistic situation where you would want a Gray Ogre in lieu of a Suq'Ata Lancer.

Adding an ability to an otherwise uninspiring creature can yield even more amazing results...

...but, again, these cases of "awesome beats awful" aren't really that interesting beyond once the concept of one card being better than another in general sinks in.

How about this card?

It turns out that if you were stuck under this card...

...you might rather have a Shatter you can cast than a Divine Offering with higher upside but that is stuck in your hand!

The point is, as unexciting as it might seem on its face, Shatter has almost always been a playable card at

...which is a great signal for deck designers!

If Shatter is consistently "good enough" (unlike, say, Gray Ogre), then the times when we get a card that is even better than (the quite playable) Shatter should signal us to clear opportunities for additional value. 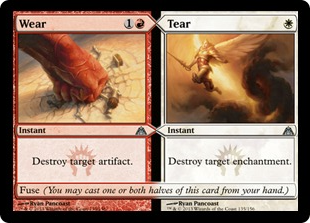 All of these cards are better than Shatter because, like Firedrinker Satyr, they offer more value than the original card, at the same cost.

You'll note that in all these cases we have simply phenomenal Magic: The Gathering cards!

Ancient Grudge is always equal to a Shatter on its face; and then later in the game, players who can muster a

can get an extra Shatter! Ancient Grudge has been literally the best card to play in multiple Extended formats (particularly when players invested multiple cards into plays like Chrome Mox or Isochron Scepter).

Smash to Smithereens also gives us the baseline effect of a Shatter. But Smash To Smithereens is wonderfully synergistic with a red "burn" theme, because it tacks on the power of a Lava Spike for no additional cost. In the right deck, you might even see a player opt for Smash to Smithereens over the potential card advantage of Ancient Grudge or Wear & Tear!

Like the other options listed, Wear & Tear gives you the baseline text of a Shatter... but sometimes you can destroy an enchantment, and sometimes you can get a two-for-one (giving you either more options or more value). Wear & Tear is legal in Standard right now... but I am sure there are midrange players who would love to see it outlawed! Ever have your Whip of Erebos and Underworld Connections both destroyed on the same turn? How about your Detention Sphere and Ratchet Bomb? Wear & Tear can itself feel like a bomb!

Murder was recently re-replaced by Doom Blade as the black core set removal card of choice.

Murder was never as popular as Doom Blade and saw relatively little play.

On the other hand, Hero's Downfall—at the same cost—is very popular. The additional flexibility in being able to kill Planeswalkers and not just creatures pushes this option over the top.

A different way cards can show strict superiority over other cards is when they offer similar or greater effects for lower, or less-restrictive, costs.

Most players will opt for Counterspell, but the answer is not cut and dried. There are certainly cases where you would like to have a Dissipate in your deck... and in long games against flashback cards or various Phoenixes, Counterspell will not get the job done.

That said, there are different relationships that are easy to draw.

Counterspell is better than Cancel because it offers the same effect at a lower cost.

Like Stoneforge Mystic being better than Squire, Dissipate offers a more powerful effect than Cancel for the same cost.

Burn cards offer us many similar dimensions for comparison.

Incinerate and Lightning Strike cost the same amount of mana, but Incinerate is more flexibly powerful against particular kinds of creatures.

III. Advantages Across Colors Are Not Strict

(... and oftentimes, not advantages at all)

This is largely a repeat of Savannah Lions vs. Jackal Pup or Shatter vs. Divine Offering. Simply, different colors have different strengths and weaknesses, so seemingly less-powerful cards can be more desirable, effective, or successful than their "better" versions in other colors.

After all, they cost (about) the same; they are the same size; and while Grizzly Bears is a generically vanilla creature, Ironclaw Orcs simply has a defensive disadvantage.

Grizzly Bears may have drawn exactly zero dollars in competitive Constructed play, whereas Ironclaw Orcs has doubtlessly earned hundreds of thousands of dollars across many years and formats!

While there are all kinds of practical things we can talk about, ranging from collective experience to personal preference between colors and un-like effects, we can't necessarily talk about them in strict terms.

Strict Superiority, Basically Better, or Other?

Here are some strict and not strict cards for you to compare.

River of Tears has a lot going for it; unlike many other types of dual lands, it enters the battlefield untapped and never deals a point of damage to you. But try suspending an Ancestral Visions with it on turn one!

You'll have a hard time finding someone who would opt for the inflexible and expensive Verdigris if given the option, but even at the same casting cost, Viridian Shaman's advantages—primarily the extra 2/2 body—are not strict. Verdigris is an instant and different cards interact with each

Although Gitaxian Probe offers the opportunity to play for nothing, the sorcery vs. instant tension makes this an interesting divide. Both cards were showcased in last week's Pro Tour Born of the GodsTop 8. Alkio played a Peek that fit so well with his Snapcaster Mages while Dickmann wanted more sorceries to grow his 'goyfs.

As you might have gathered already, finding instances of strict superiority in smallish formats—say any current Standard—are fairly rare. Ergo, the ability to exercise this kind of discrimination will either only come up when looking at wider groups of cards, or when playing big formats. Therefore, it might be a bit unfair to vilify Elfhame Palace in the context of a Stirring Wildwood or Sunpetal Grove that it would never, practically speaking, have ever had to compete with. However, the power of understanding strict superiority can help us when evaluating new cards.

If you read my interview with Tom Martell you will know that top player considers modeling on past knowledge and performance a key shortcut in his ability excel in the present (and future). So when you see a card that is strictly superior to a card that used to see play (say, anything better than Shatter), that might give you an edge (or at least a clue) in new-card evaluation.