time to time I'm asked by different people to make announcements in my column. This week the person asking was me. Being that I'm pretty fond of myself (can you tell?), I decided to honor my request. Next week is the fourteenth annual Magic: The Gathering World Championships. We've decided to ramp things up and turn the entire weekend into a Magic extravaganza, basically a Magic convention featuring the World Championships. There will be all sorts of cool things to do. Click here for more info. Also, if you're interested in hearing me wax nostalgic about the World Championships, I did that a couple years back. Click here. 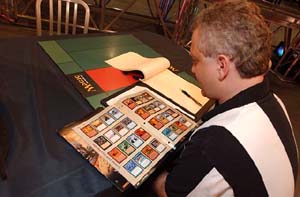 Mark hunts for trivia at U.S. Nationals 2003.But that isn't what I wanted to plug. Not exactly. You see, every year at Worlds I carry on a tradition that goes back to my very early days at Wizards of the Coast. In fact, the event in question predates my time at Wizards. It even predates my involvement at Wizards. I am talking about the "Question Mark" Magic Trivia Game Show. I have always been wild about trivia so it made perfect sense when I got into Magic to start running trivia game shows at conventions, which I did for numerous years in Los Angeles before I made the permanent trek up to Washington. These game shows led me to start doing trivia shows at all the Pro Tours (back in the day when I went to every Pro Tour).

Now that I travel less often my trivia shows have been confined to once a year at the World Championships. I've had a trivia show at every Worlds since the third one in 1996. And the tradition goes on this year—check our Worlds page for info on when and how you can participate. The way it works is this: People come in teams of three. Every team gets to participate. The game show is run like a Swiss tournament with an elimination style Top 8. Every team who bothers to stick around until the end will win something and while I can't give away the grand prize just yet, it's going to be something pretty cool.

So what does this have to do with my column? Well, to help people better prepare for the event (or to get a taste of what it will be like if you are unable to attend) I have decided to turn my column today into a trivia quiz. I've only once before ever had a trivia quiz in my column, and that one was dedicated to Soldiers. (Hey, it was Soldier Week.) The questions are of a variety of difficulties and I've tried to pick things where the answers are interesting even if you can't answer the question. This way you can try to see how well you can do or you can just learn some new Magic factoids.

I will ask one question for each Magic set that's been released to date. Because that number has grown kind of large, I've broken down this column into two parts. Part II will appear in two weeks (as next week is a theme week). This way the column appears the week before and the week after the event I am plugging. Less talking; more trivia.

What Alpha card was considered misprinted back in 1993 yet was later errattaed back to its Alpha functionality?

The original Arabian Nights Aladdin's Lamp had two of what?

How many cards in Antiquities do not have the word "artifact" or "artifacts" appear anywhere on the card?

What ability appears for the first time in Magic in Legends on one creature, yet there are two other cards in the set that neutralize the ability?

This set includes one of only two cards in existence where the same person designed the card, named the card, wrote the flavor text, and illustrated the card. What is it?

How many cards in Fallen Empires either naturally have flying or have the ability to grant a creature flying?

There were five different Ice Age booster pack images, one of which pictured a creature in the art that isn't the creature represented by the card it comes from. What is the card?

Who are the planeswalker lovers of the Homelands story? (Hint: Both their names appear in card titles in the set.)

Waiting in the Weeds had the creature type of its tokens changed when the art came back showing different creatures in the art than were referenced in the rules text. What creature type was supposed to be premiered in Magic on this card?

What staple design convention started in Visions (on four cards)?

What was blocking called in Portal?

Weatherlight's name was what first for a Magic expansion?

Tempest's Dirtcowl Wurm is a famous first. What was it the first card to ever do?

What did the Exodus expansion symbol do that had never been done before?

What real-world item appears in numerous Portal Second Age illustrations but never in the art of another Magic expansion?

What is the converted mana cost of B.F.M. (Big Furry Monster)?

In Urza's Saga, R&D tried to repeat a popular old card but was unable to find a workable template (or workable rules; you say potato, I say potahto). Because this happened last-minute during templating, we were forced to create a new design that matched the existing art. This went on to be one of the many powerful cards from Urza's Saga. What card did we try to print and what card got made in its stead?

The woman pictured in the art of Tinker would many years later get her own legendary creature card. Who is it?

Masticore was an attempt to make an improved version of what card?

Portal Three Kingdoms has the record for the largest number to ever appear in a Magic title. What is the number?

In the art of Unmask, we learn that archvillain Volrath, a shapeshifter, has been aboard the Weatherlight disguised as whom?

What Nemesis creature would later go on to star in a Magic: The Gathering commercial? (Hint: He hates focus groups.)

Fires of Yavimaya was part of a five-card cycle. Name the other four.

What was the official nickname for the largest new mechanic in Planeshift?

We're halfway there so I guess it's time to say goodbye for this week. Remember that Part II will be in two weeks when I'll finish going through the second half of Magic expansions. I am curious if you all are enjoying a trivia column and whether you'd like to see more in the future. (Well, more than the one two weeks from now.)

Join me next week, when we go aboard a mighty ship.