to Betrayers of Kamigawa Preview Week, Week One (of two)! And I get the honor as always to share with you the very first Betrayers preview card. And it's even a ninja. I guess that's the first piece of news about Betrayers. Magic now has ninjas. How did that come to be and why weren't they in Champions? I'll get to all of that, but first let me get the preview card out of the way. This is my first week back after my three week break (while I love writing this column, it is nice every once in a while to not have to write it every week), so the last thing I want to do is piss off my readers. (I have plenty of time to do that in future weeks.)

So here's my planned schedule for today's column: First, I'll show the preview card. Then, I will hold a small question and answer panel. Sound good? Okay, on with the preview. There's not much to say before I show you the card, so I'll just have to lead off with “Hey look, a ninja!” 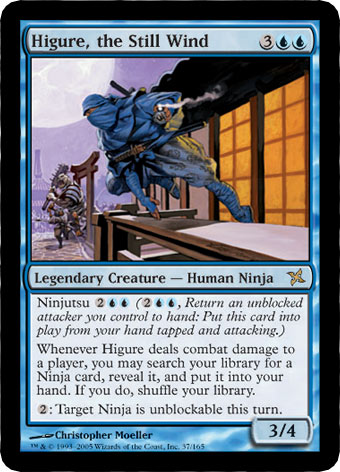 Now, I'm ready to field some questions. Yes, you at your computer eating Diet Coke and Pork Rinds.

Q: Uh, yes. A while back you started a tradition of introducing the design team of each set. As this is your first Betrayers of Kamigawa column, would you mind telling us a bit about the Betrayers design team?

I assumed the first question would be about the card, but sure I have no problem talking about the design team.

Mike Elliott (Lead) – In my column during Top Ten Week (“Top Ten of the Morning”) I had a Top Ten List of the R&D members that had worked on the most expansions. In it Mike was listed at number 2 with myself listed at number 3. (Current VP of R&D and former Head Magic Designer Bill Rose was number 1.) Now I made the list counting in my head. Henry Stern (number 4) was curious to see the list based on official design and development credits. The end result was that Bill slipped down to number 4 and Mike, Henry and I each slipped up a slot. This means that Mike holds the record for having worked on the most Magic design and development teams (I'm currently two behind him for anyone who cares.)

Mike has worked on so many design teams that I'm starting to run out of new things to say about him. He's been working on Magic for nine years and has had about as much influence on the game as anyone (well, save Richard). I talk about newcomers quite often. Mike is an oldcomer. If you don't know Mike's accomplishments then you simply aren't a fan of the game's history. (For those that don't know he was Lead Designer of Stronghold, Exodus, Urza's Saga, Urza's Legacy, Mercadian Masques, Nemesis, Planeshift, Onslaught, Legions, Betrayers of Kamiagawa and probably one or two more sets that I've forgotten. Plus, he's been on over half of the design teams from Mirage forward.)

Randy Buehler – Shortly after Randy showed up at Wizards he worked on the design team for Apocalypse. And then he started doing a lot of development. Then one year, he started popping up on design teams again, working on Fifth Dawn, Unhinged and Betrayers of Kamigawa right in a row. Randy's value to the design team is not really card design (although you'll find a few of his cards in Betrayers). Randy is very good at giving the team perspective and helping find the strengths and weaknesses in a design.

Next, the twentysomething with the red tie.

Q: Ninjas, huh? What got you to do ninjas?

When the Champions of Kamigawa design team starting designing the block, they made lists of everything from Japanese mythology that they thought a Magic-playing audience might know. They turned this into a questionnaire that they gave to everyone at Wizards they could think of who played Magic. The two number one items (which I believe were checked by everyone who took the survey) were samurai and ninjas. The other important discovery was how quickly the items dropped off. The lesson was that the audience knows a few things about Japanese mythology but not as much as you might expect. Ninjas were definitely in.

Next, you reading this column in between taking your turn on Magic Online. The one playing Champions draft. With a black shirt. That says “I Let the Dogs Out”.

Q: Why weren't there any ninjas in Champions? You mentioned it above, so I figured someone had to ask. 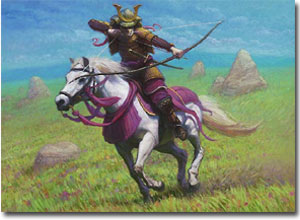 To answer this question, I have to pull everyone back a few steps. Magic sets aren't designed in a vacuum. They're designed in blocks. This means that the first set in a block has to think about the other sets in the block. During Champions' design we realized how cool ninjas were. So much so, that they seemed worth saving. So we introduced the samurai and then the next set – enter the ninja!

Next, the young girl with the silver glasses.

Q: Um, do all the ninjas have ninjutsu?

Yes. Just as all the samurai have bushido. But the combat damage triggers vary from ninja to ninja, so how they play has a great deal of variance.

Next, the guy with the cracked screen.

Q: Are all ninjas black?

No, R&D talked it over and decided that a ninja's sneakiness also made sense in blue.

Q: So there aren't any white, red or green ninjas?

Next, the… person with the long braided black hair, with the gloves.

Q: How did you come up with ninjutsu?

That's an interesting story. So, the Betrayers design team (a.k.a. "Mike and Randy") knew that they were going to do ninjas. And they knew they were going to be black and blue. And they knew they wanted a keyword ability to tie them all together, as bushido ties together the samurai. And they wanted it to be flavorful. I think the first suggestion came from Richard Garfield. He suggested that they all have comes into play abilities. Richard argued that ninjas weren't as good of fighters as the samurai (and from my pop culture exposure to ninjas, man they seem to lose every fight). What they had going for them was sneakiness. Richard thought that perhaps the “comes into play” abilities could mimic this. So the design team tried a few cards that Richard designed. And then they tried creatures that could be played as instants. Next they tried creatures that could be played as instants that all had comes into play abilities. But in the end all of these versions seemed too humdrum for the ninjas.

Next was a series of creatures based loosely on Tempest's Opportunist. These creatures each had a tap ability that could only be triggered if you managed to damage the opponent. While the cards played okay, they just didn't seem to capture the flavor of the ninjas. (Your ninjas, for example, would never attack.) Then Aaron Forsythe made a push to try bringing back shadow. The flavor, Aaron argued, was a perfect fit. So we mocked up some cards and played, but shadow just wasn't getting the job done mechanically.

Next we tried a mechanic that Richard had created during Odyssey design that has been looking for a home ever since. (I'm not specifically mentioning what it does as I'm confident we will find a home for it.) The mechanic got closer but still wasn't quite all the way there. Now comes the part where I intersect with the Betrayers design (and as you will see in future weeks, this is pretty much it). I decided to attack the problem from the flavor side. What did we want ninjas to do?

Well, we wanted the ninjas to attack. And we liked them doing bad things if they managed to actually do their damage. And we wanted an element of surprise. So I started thinking about what tricks a ninja might have up his sleeve. (You know, along with the throwing stars.) And then it hit me – disguise. What if the ninjas were able to disguise themselves as other creatures. And then at the last moment, they'd rip off their mask and say, “Gotcha” (in a non-Unhinged way, mind you.)

With this idea in mind, I started thinking about how I could make it work. I decided it had to be after blocking because the fun of being sneaky is that you get by the opponent's defenses, Once I thought it through, the answer seemed obvious. I had to let the ninja in my hand trade with an attacking creature. I chose to return the original creature to its owner's hand because putting it in the graveyard made it feel like the ninja killed it. By returning it to your hand, it had more of the “it was a ninja in disguise all along” feel I wanted. (And it had better gameplay value.)

The flavor worked well. In addition playtest showed that the mechanic had a secondary effect. It made players extra paranoid about all creatures, especially small, cheap ones. I named my mechanic sneak. The first card I made, incidentally, was a little blue ninja that drew a card whenever it damaged the opponent (the card's a common in Betrayers).

And that my faithful readers is how ninjas got their mojo.

Well, it looks as if we're out of time for today. I hope this has given you a little insight into the world of Betrayers and how the ninjas came to be.

Join me next week when I flip out… again.

Until then, may you know the joy of “sneaking” out a ninja.