ou Make the Card 4 has returned! This is the process by which you, the readers of this website, create a Magic card, to appear in a future Magic:The Gathering set. So far, you've decided what color and type our card will be, and what rules text it should have. We've begun "sneak-preview playtesting" of the card in the Future Future League. If there are problems with the card, we'll be sure to include you all in the process of making changes. 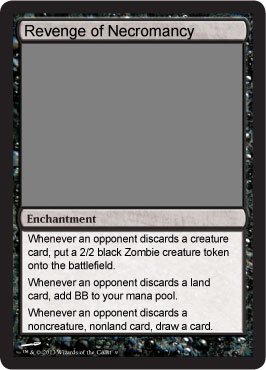 It's time to turn away from design concerns for a while and put some work into the creative treatment of this card. Now, it's important to remember, going forward, that "Revenge of Necromancy" is merely a temporary playtest name and you will eventually give the card its final name that will appear on printed cards.

There's an intermediate stage that we don't usually talk about, where a card has shed its original playtest name because creative has concepted it. We indicate this in Multiverse (our internal database) by putting the name in brackets. For example, the card you know as Mindeye Drake began its life with the playtest name of Flock of Pigeons. When Creative concepted the card, it received the concept name [Psychic Drake]. Once Lars Grant-West, the illustrator, finished the art, creative decided on the final card name, Mindeye Drake.

When we commission an illustration from an artist, we send the artist an art description along with the concept name. This tells the artist the color of the card; what card type it has; and describes the action, the focus, and the mood that the piece should have. The creative team wrote a selection of concept names and art descriptions for Revenge of Necromancy. Choose your favorite and vote for it! The polls close on Wednesday at 9 p.m. PST. Remember, these are not the final card names, just the names that the artist will see to help him or her illustrate the card!

Color: Black spell
Location: An ancient cemetery
Action: We see an old cemetery, but there are ornate stone sarcophagi instead of dug graves. The lids of several sarcophagi have been moved, exposing the rotting corpses inside. A dark, purplish-black mist rises out the mouths and eyes of the corpses like dry ice. It billows out onto the ground, corrupting the cemetery grass.
Focus: The necromantic mist
Mood: There is no peace in this rest.

Color: Black Spell
Location: A nasty trash heap outside a small settlement
Action: We see a RAG MAN, a hunched and withered humanoid figure who appears to be held together by frayed ropes and worn leather straps. The being is standing triumphantly atop a heap of bones, broken armor and weapons, and other less identifiable trash. It is holding up a skull in one hand; the other hand clutches a filthy sack that is bulging with "treasures." A glow of purplish power surrounds the Rag Man and the skull.
Focus: The glowing figure.
Mood: Creepy yet eco-friendly.

[Season of the Lich]

Color: Black Spell
Location: A misty clearing between withered trees
Action: This is a mood piece, set at night. The background of the image is an enormous full moon which touches the horizon... very bright, but slightly ominous in its tint. Most of the image is in silhouette against the moon's light, but in the foreground we can see enough to know that we are in a dense pumpkin patch to give us a sense that this is a specific time of year. In the center of the image is a figure, very tall and impossibly thin, who is seen in hard silhouette against the moon. His posture is regal, his face slightly upturned to the night.
As the pumpkin shapes become more back-lit we realize that some of the curved silhouettes aren't pumpkins at all, but are the hunched backs of several zombies who are starting to rise from among the patch.
Focus: The scene
Mood: "In the first hour of the third day of the seventh season, dim your lamps. Hush your infants. And lock your doors."

Color: Black spell
Location: A field of corpses on a blasted wasteland.
Action: A necromancer stands with her arms outstretched. Ghostly energy is coursing up from the bodies that are strewn about. The energy converges around her where it begins to turn purplish. Maybe in the background we can see silhouettes of zombies rising out of the ground.
Focus: The energy rising out of the corpses and the ground.
Mood: Supernatural, eerie

Color: Black Spell
Location: Outdoors, during a colorful dusk
Action: Liliana wades toward camera through murky waist-deep water. Her body language is graceful and confidant, there is a smirk on her face. Her hands are outstretched just enough to agitate the surface of the water on both sides of her as she wades. Behind her two trails of zombies have just begun to rise from the water and follow her, as if awakened by the ripples caused by her hands.
Focus: The scene
Mood: Placid. Pretty. And frightening.

Thanks for voting. We'll continue playtesting here in R&D. If we run into a snag with Revenge of Necromancy, we'll let you know so we can figure out what our next move is. Meanwhile, Jeremy Jarvis, our art director, will select an artist. The next step for you all will be to vote on which sketch you like the best. See you in a few weeks!