elcome back to You Make the Card, the process whereby YOU, the readers of DailyMTG.com, work together to design a Magic card, to be printed in a future set. Last time, you all voted on which sketch you'd prefer to see turned into a finished painting. We're still waiting on Matt Stewart, the artist, to finish the final art. But we don't have to just sit around; there's work to do! 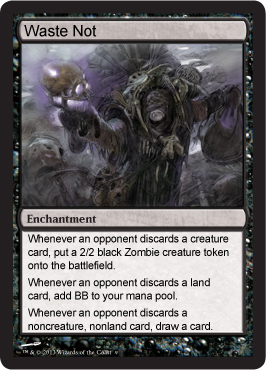 This card started out with no name at all. For a while it had a playtest name, Revenge of Necromancy. Then it had a concept name, Waste Not. Now it's time to make the card's final, real name, which will appear on the printed versions of the card when it is released.

There will be two fields. In the "Card Name" field, type in what name you think the card should have. In the "What was your inspiration?" field, describe how you came up with the idea for the card name you typed in the previous field.

Now, I'll give you a few tips to help your ideas have a better chance of making it to the Top 8, where people will vote on the eight best card names. A list of Dos and Don'ts, as it were.

Get creative! I can't wait to see what you come up with. We'll accept submissions until 8:59:59 p.m. PST on August 6. Then it will take us some time to sift through all of the submissions and put the Top 8 on the website for a vote. See you in a few weeks!