2021 is winding down, and we've had another crazy year. (Or is it just 2020 part two? It's impossible to tell at this point.) I wanted to talk a bit about how this year went and what we have in store for 2022, particularly with the most recent press release that has gone out, but if you just want to get to what's coming, jump to the 2022 section now.

In 2020, we spent a lot of time expanding games systems so we could support Double Masters and Commander Legends releases and introduce new ways to play MTGO. This year the focus was on card content, with five Standard sets, Modern Horizons 2, and Time Spiral Remastered all launching this year.

One of the challenges digital continually faces is translating the amazing cards and mechanics that the Magic team designs into a functional digital experience. The MTGO team regularly touches base with the design team and the MTG Arena team to review cards and mechanics so we can start discussing how we'll implement various effects and make sure that card designs are deliverable. Every so often, these conversations uncover cards or mechanics that call for updating how the digital game functions, and this year was no exception.

Broadly speaking, Kaldheim's set mechanics were relatively straightforward, but our foray into the snowy realms included a higher proportion of complex cards that we needed to account for individually. Strixhaven: School of Mages added an additional collation on top of an update to how Magic Online handles zone changes. Adventures in the Forgotten Realms added two large features in die rolling and dungeons. Innistrad: Midnight Hunt required a refactor of how life gain and replacement effects work but luckily set the stage for Innistrad: Crimson Vow to have closer-to-normal complexity. In the middle of all of that was Modern Horizons 2, its myriad of mechanics, and a complete overhaul of how tokens work.

Beyond the new card content, we also ran more Cube events than any year prior, with several runs of our Modern Cube, Legacy Cube, and Vintage Cube, plus more spotlight cubes than ever with Temur Cube, Live the Dream Cube, Nega-Cube, Mengu-Cube, Pioneer Cube, Proliferate Cube, Gaby and LSV's Vintage Cube, Bant Cube, Artisan Cube, Core Set Cube, and Artifact Cube (starting today!). We also tried a few new alternative play types, including adding the ability to select decks for Gauntlets, which debuted with the AFR Class Challenge Gauntlet and returned with the Modern Banned Gauntlet.

For the second year in a row, we also collaborated with Pastime Games to provide convention support for various events as a digital extension for players who couldn't participate at the in-person events. We also provided support for Eternal Weekend events and those amazing communities. In addition, we delivered new MTGO-only promo cards for players to collect, like Demilich in a classic card frame or Volcanic Island with an all-new art. 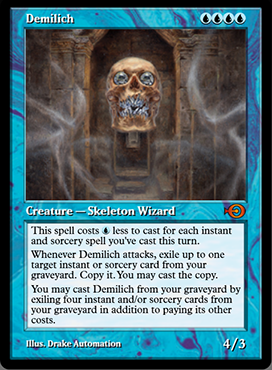 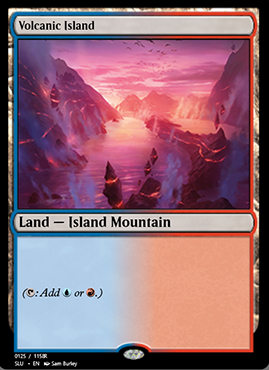 Finally, we also did some upgrades under the hood to improve game server performance and stability, shipped several fixes to reduce the crash rate, improved some of our internal player support tools, and delivered some other behind-the-scenes work that isn't flashy but helps keep Magic Online running. While we are proud of what we delivered, there were some unfortunate casualties as we were unable to fit all the work into our schedule.

The first casualty was the Commander content after Kaldheim. While we were able to deliver a handful of cards, we've had to delay most of them. New Commander cards tend to do amazing things that are brand new to digital and often require the team to tackle cards one at a time. In previous years, we've cut out specific time in our schedule to handle these releases. With some of the deeper refactors and bigger card sets we had to do this year, we didn't have as much time to devote to these one-off designs. As we move forward, we'll look for opportunities to catch up on this content where we can, as we did when we brought in Laelia, the Blade Reforged with Innistrad: Midnight Hunt.

The other thing that slipped out of 2021 was our update to the battlefield. We are excited about the direction of the battlefield and how it will improve the play experience, particularly in multiplayer and Commander matches, but we were unable to make as much progress this year as we had hoped. This feature is still a high priority for the team, and we'll be exploring ways to unblock this work in 2022.

Speaking of 2022, the big change for next year and beyond is that Wizards of the Coast will be partnering with Daybreak Games to develop and publish Magic Online. Daybreak Games is a leading global publisher and developer of multiplayer online games and has a proven track record of supporting and growing live-service games. With an established, long-standing relationship with Wizards, Daybreak Games is a great fit, not only to continue Magic Online's legacy but also to build on it.

While there will be a transition period over the next few months, we don't expect this change to significantly disrupt the general player experience. The current Magic Online team will form a new studio under the Daybreak Games family of studios and will continue to run the game in close collaboration with Wizards of the Coast. We'll take every effort to minimize disruption to the development of card sets, features, and updates, as well as active programs like set redemption and the Magic Online Champions Showcase.

Our short-term focus will be on ensuring the transition runs smoothly, that all our systems are supported, and players can continue to have fun with new card sets as they are released. We have a robust card set schedule in 2022, with Kamigawa: Neon Dynasty just around the corner (and previews starting soon!). Streets of New Capenna, Dominaria United, and The Brothers' War will all bring awesome worlds to explore, while Double Masters 2022 and Commander Legends: Battle for Baldur's Gate content are sure to spice up the eternal formats. We'll also continue to lean into offering new and exciting cubes and alternative play experiences, starting with a new spotlight cube in early January.

Once our publisher transition is complete, you can expect to hear more about where the team wants to take the game in the future. Updating the battlefield with a focus on multiplayer and Commander play is still a very high priority for the team, along with continuing to modernize some of the underlying systems that run the game. Daybreak Games also brings decades of gaming experience and expertise to the table, and in collaboration with the MTGO team, will be exploring how their knowledge and skills can help improve and grow MTGO for years to come.

As we approach 20 years of Magic Online, we're excited by what lies ahead and can't wait to share it with all of you. Thank you for everything and may your 2022 be amazing.