The Brothers' War arrives in MTG Arena on November 15, and you'll have a little over a week to review the card image gallery, learn the cards, and practice your Sealed and Draft skills in preparation for the Arena Open: The Brothers' War Mixed Limited happening November 26–27! 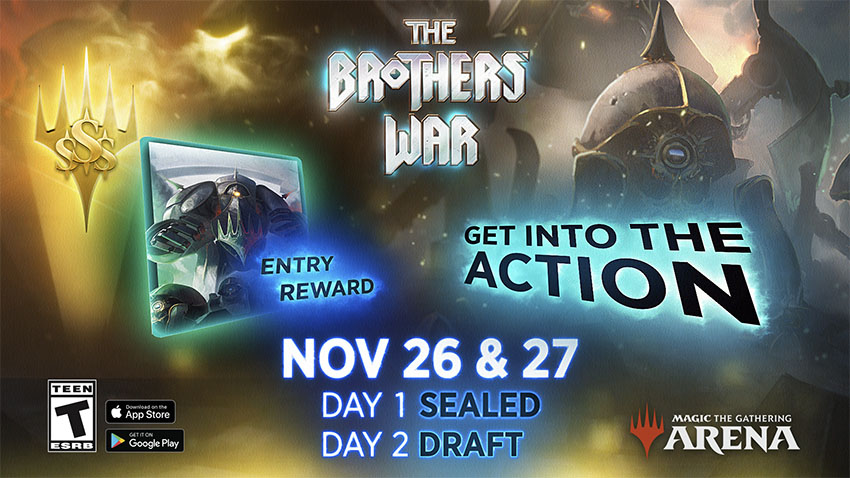 Day 2 of this Arena Open is a little different from previous Limited Arena Opens, and you'll find these details below and in the State of the Game – The Brothers' War article.

But before we get to the details:

The Arena Open begins on Saturday, November 26, with both Best-of-One and Best-of-Three The Brothers' War Sealed matches using 30-minute match timers for each player.

Everyone who enters will receive The Brothers' War card sleeve: 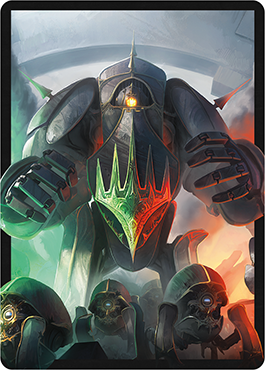 Format: Choice of Best-of-One or Best-of-Three The Brothers' War Sealed

Players who qualify during Day 1 events may enter Day 2 competition with a new structure and rewards. You may only enter once on Day 2, even if you qualify multiple times on Day 1.

The Day 2 structure is changing slightly. There will be two Best-of-Three The Brothers' War drafts using 30-minute match timers for each player, but they'll work like this:

Draft One features four guaranteed matches. Achieving a record of 3–1 or 4–0 will earn you a Draft Two entry token. Players with an undefeated 4–0 record from Draft One will carry forward an unused loss pip to Draft Two. That means Draft Two for those players will be a double elimination, allowing them to suffer one loss and stay in the running.

In Draft Two, players compete until they earn four wins or reach:

Draft Two players will draft and matchmake in the same queues.

All Day 2 players will draft at the beginning of the day for Draft One. The entry period for Draft One is from 6 a.m. to 8 a.m. PT (14:00–16:00 UTC). Players will then have until 12 p.m. PT (20:00 UTC) to complete four matches. Earning three or four match wins will grant an entry token to the Draft Two event. Players with four wins will carry forward an extra loss pip, making their Draft Two a double elimination event (players with three wins in Draft One will have a single elimination Draft Two event).

Then, all continuing players will draft a second time in Draft Two. The entry period for Draft Two is from 12 p.m. to 2 p.m. PT (20:00–22:00 UTC). Players will have until 6 p.m. PT (November 28, 02:00 UTC) to earn up to four match wins or be eliminated after either one match loss, or two match losses for those players whose undefeated Draft One record allowed them to carry forward the extra loss pip as described above.

The top prize is changing from $2,500 to $2,000, but rest assured we're paying out the same amount of cash; we're just dividing it among more players.

How many players can earn monetary rewards on Day 2?

Can I qualify for Day 2 multiple times?

No, qualifying multiple times will not grant you additional invitation tokens for Day 2 participation. Players qualify for Day 2 by earning enough wins in Day 1 Best-of-One or Best-of-Three events.

What should I do if I encounter an issue during the Arena Open?

Contact Customer Service if you need assistance during the Arena Open. We are unable to provide support for in-game issues over social media (other than telling you to submit a ticket).

If you receive a monetary reward, we will contact you at the email address listed in your Wizards account to ask for your DCI account and to provide instructions for activating your eWallet account with our partner i-Payout. If you already have an i-Payout account, we'll notify you of your prize.