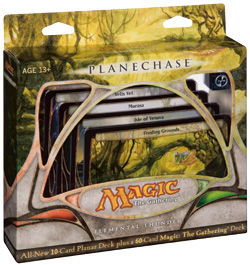 he "Elemental Thunder" deck packs big creatures that become more powerful with every move your opponents make. Everyone will wince as you put creature after creature onto the battlefield, each with the potential to single-handedly defeat an opponent in a few turns.

You will want to cast your big creatures early and often. Smokebraider, Rampant Growth, and Search for Tomorrow all give big boosts to your mana production. Use Flamekin Harbinger to search your library for the most threatening creature you can find. You won't believe the look on opponents' faces when they're suddenly staring down the business end of an early Verdant Force or Living Hive!

This deck relies on some important creatures to defeat multiple opponents. Taurean Mauler looks puny at first glance, but against many opponents it becomes very scary very fast. The same goes for Forgotten Ancient, which gets bigger and bigger with each spell cast. With such huge threats, opponents might gang up to stop you early on. Protect yourself by forging an alliance, but if you get the chance to take out an opponent, go for it.

Your planar deck offers support for your huge Elementals. Creature spells cost less on Turri Isle, making it easier to drop big creatures earlier in the game. Tapping a land in the Eloren Wilds produces an extra mana, which is great for casting expensive creature spells. Or you can just pump all that mana into putting +1/+1 counters on Ivy Elemental. On the Isle of Vesuva, creature spells summon two creatures. What could be better than getting two enormous Elementals for the price of one? 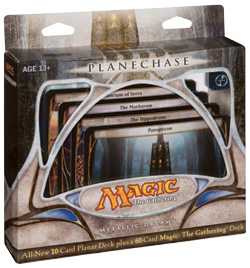 he "Metallic Dreams" deck utilizes artifacts to draw on the power of every color of mana. Small mana-producing creatures fuel your ever-growing army of more powerful machines. Under your command, they'll all work hand-in-shiny-metal-hand to extinguish your opponents.

Assemble an early line of Myrs to increase your artifact count and power up your larger creatures. Later on they'll produce the variety of mana needed for sunburst and casting your colored spells. Pentavus and Nuisance Engine generate an army of disposable drones that add size to Master of Etherium and Broodstar. They can also boost Lodestone Myr, an unstoppable machine that smashes hard through any and all defenders.

Having an army of artifacts at your disposal also has some more interesting uses. For every artifact you control, Cranial Plating allows even your smallest Pest token to sneak in lots of damage. Bosh, Iron Golem can hurl your high-cost artifacts at an opponent to finish the game, and Skeleton Shard lets you return artifacts from your graveyard to your hand. You have several ways to draw cards, plus Fabricate if you can't draw the artifact you're looking for.

This deck's plane cards fit its strategy with machine-like precision. At the Panopticon, everyone draws an extra card each turn. In Minamo, casting a spell is rewarded with a card draw. As you empty your hand, you'll welcome those extra cards. When you planeswalk to Krosa, its +2/+2 bonus will swell each of Nuisance Engine's Pest tokens to 2/3! 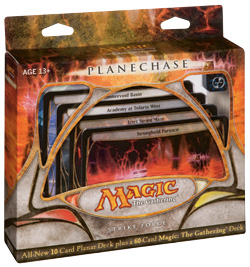 he "Strike Force" deck comes out of the gate quickly to deliver an endless stream of pain. Hasty creatures, fiery burn spells, and vicious double-striking monsters will make short work of all who oppose you.

Hit hard and fast with a swarm of small creatures. Thanks to double strike, Boros Swiftblade and Hearthfire Hobgoblin fight better than most creatures their size. Cards that boost power like Reckless Charge and Glory of Warfare are doubly effective with them. Follow up with powerful midgame bombs: Flametongue Kavu gets rid of troublesome creatures, and Menacing Ogre delivers a hasty beatdown. Late game you can turn things over to powerhouse creatures like Rorix Bladewing and Razia, Boros Archangel to finish off whoever is left.

Whenever you come out this strong, you're sure to inspire opponents to team up against you. Luckily, you're prepared. Focus your burn spells on one enemy at a time to quickly knock each one out of the game. Turn your opponents' armies against them with a well-timed Insurrection and you can defeat one, two—or maybe even all—of your opponents in one big attack! Or if things get out of hand, you can resort to using Akroma's Vengeance to clear the board.

Be sure to planeswalk when you need to turn up the heat. Inside the Stronghold Furnace, damage is doubly effective. Likewise, the Izzet Steam Maze makes a copy of each deadly burn spell you cast. At the Academy at Tolaria West, an empty hand is not just okay, it's the quickest way to draw seven cards. 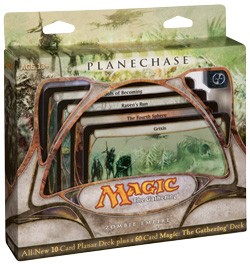 ith the "Zombie Empire" deck, legions of undead are at your beck and call! It boasts some of the greatest Zombie cards ever printed plus a supporting cast of spells that accentuate the resilient nature of the undead.

In the early game, lead off with your small-yet-deadly creatures. Dregscape Zombie and Cadaverous Knight refuse to quit, and Festering Goblin often takes something with it when it dies. Undead Warchief makes your Zombies cost less to cast and boosts their power and toughness. Late game, Gravedigger scours your graveyard for the best creature cards, and Beacon of Unrest makes an artifact or creature from any graveyard yours to command.

When it's time to finish off an opponent, you can cast a big Consume Spirit. If you've amassed an undead army, instead cast Profane Command to give all your creatures fear. Unless your victim has a supply of black or artifact creatures, that ought to do the trick.

Your planar deck is full of places that make Zombies smile, so try to planeswalk on your turn. In Grixis, your creatures have unearth equal to their mana cost. Even death won't stop the beatdown! At the Pools of Becoming, you get a new hand at the beginning of your end step. And only your opponents will suffer from The Fourth Sphere's hunger for nonblack creatures.