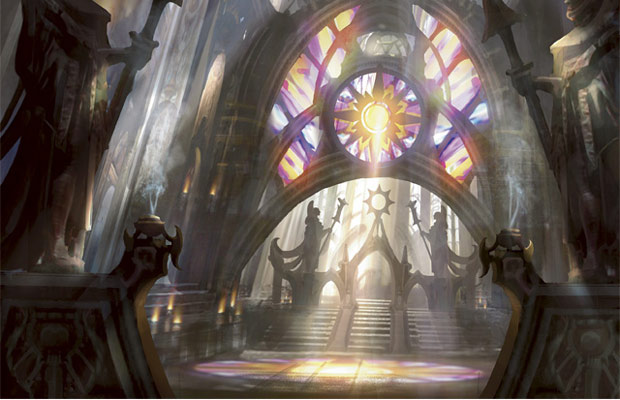 hey stood and gazed at the intact window, the Orzhov guild symbol catching the morning sun, filling the ruined cathedral with a golden glow. To see such a marvel in the Rubblebelt was a rare thing.

Domri Rade sized up the unblemished glass of the solar disk while he rolled the smooth, heavy stone in his hand. His best friends, Whip and Lakkie, stood alongside him, tense with anticipation.

This was going to be great.

Domri looked at his friends. "You ready?"

Whip flashed his teeth and nodded.

"Oh yeah. Rip it, Dom." Lakkie grinned through the warpaint Whip had put on him. Not a bad job, Domri thought.

Domri turned, cocked his arm back, and let the stone fly. All the experience of Domri's young life—hitting lizards, birds, Golgari, merchants, and wagons—guided the stone toward its target like a missile of destiny. Domri had played out the effect in his mind before releasing the stone but nothing could have prepared him for the satisfying sound of the glass exploding upon impact. A resonant crash echoed across the collapsed hall. Glass splintered everywhere. Two huge yellow panes fell to the stone floor before shattering with another dazzling sound.

"Krokt!" Whip said. Then they all broke into howls of jubilation and laughter and danced like goblins after a raid.

The three friends sat around, picking through the colorful shards of glass, finding the best pieces and binding the glass to wooden hilts. They looked like magical, golden blades. 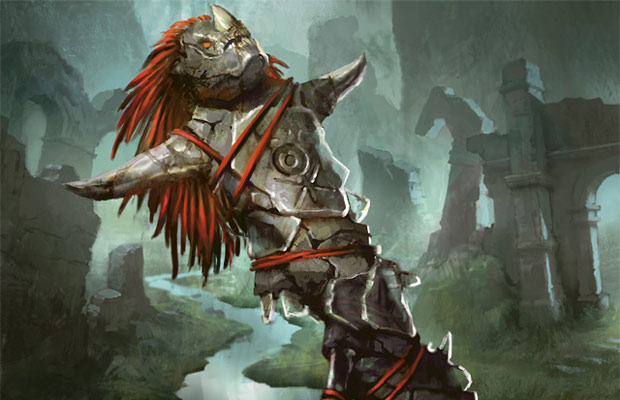 "We could call our tribe the Shard Blades," Domri said, admiring his wicked-looking knife.

"Yeah, and only the chiefs get these." Lakkie held up his finished dagger. His father knew how to make useful things out of reeds and grass, and Lakkie proved himself good at binding the glass.

"That looks wrecked," Whip said with admiration. He held out his glass blade and handle to Lakkie. "Do mine."

Domri had made a decent twin-bladed dagger with the glass at opposing ends. He finished it and demonstrated its effectiveness against some imaginary opponents, first slashing, then hacking, in fairly skilled movements.

Lakkie finished up Whip's dagger. Domri looked at his friends and grinned.

It was getting dark on the walk back to camp and early rising bats had begun to flit about, eager to feast on the twilight insects that buzzed about. Dark was a dangerous time to be out in the Rubblebelt, where beasts roamed that could swallow a warrior whole or crush a wagon underfoot. The boys instinctually hastened their stride. Whip swatted at burnbugs with a willow branch and Domri kept an eye on the shadows under the ruined buildings. Lakkie was off in another world, as usual. Domri once saved Lakkie from being a makka's lunch, and another time he kept Lakkie from being crushed by a dromad. Domri wondered if Lakkie would ever be cut out for real Gruul life. He was kind of Selesnyan. 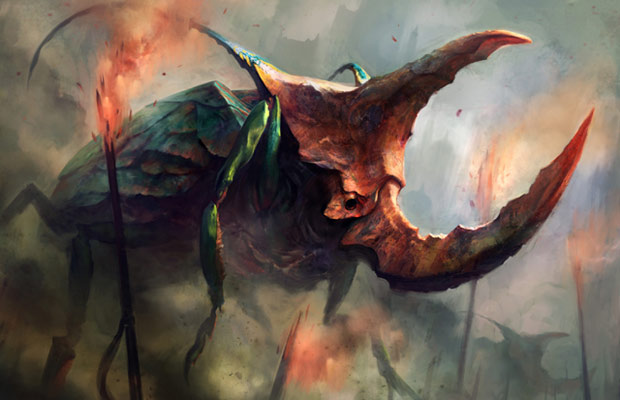 As if on cue, Lakkie said, "I wonder what it's going to be like? You know, the Burying."

"Lakkie! You gob-head." Whip swatted him with his willow branch, leaving a welt.

"Krokt, that hurt! Just wondering, that's all." Lakkie rubbed his arm and glared at Whip.

"It's no big rip," Domri said. "I'm ready for it." He hoped his voice didn't betray the weakness that fluttered within him at the mere mention of it.

He knew Whip was just as interested as Lakkie. Both of them would be weighing whether to undergo the Burying in a year's time. Tales of the Gruul rite of passage were shrouded in secrecy and dread.

The Burying came to all who sought to join the Gruul. It was said by the elder shamans to strip away all attachment to a life within the city of Ravnica, a city that was a slave to rules and represented the destruction of nature. It was said that anyone who endured the Burying came back to the tribe reborn, clear of purpose and ready to live the life of a Gruul. All were sworn to secrecy, never to talk of the details to those who had not yet gone through it. This sealed the Burying within a sarcophagus of unknown dread within the minds of all young Gruul as they neared the appointed day and hour.

It buzzed within Domri's gut like a nest of hornets. His Burying would begin at sunrise.

The morning had been spent covering Domri in burial garb and paint made of ash and clay. Shamans mumbled burial chants while, outside the tent, the tribe wailed as if he had died in the night. There was something so real about the sound of their grief that it unsettled him.

"Why are they doing that? I'm okay." Domri felt an irritation borne of fear.

The shaman who tended him, Sabast, looked at him through a mask of ochre and ash. "They are weeping for the loss of the boy they knew. In one way or another, that boy dies today."

For a moment, Domri felt a sense of panic. Maybe this was too much for him. Maybe it was too dangerous. But Domri knew others had gone before him. If they could do it, so could he.

In the afternoon, Domri and Sabast walked deep into the Utvara, a massive area of Ravnica that had seen destruction over the centuries and was home to many Gruul, in spite of attempts by Orzhov developers to claim otherwise.

"Look how nature responds," Sabast said, as they wandered through the ancient ruins. "In time it will all return back to the soil. There's wisdom in what the Golgari say. They understand nature's urge to tear down structures and reduce them to earth, but their hearts have been deadened. They have no passion for life."

Domri looked at the imperceptibly slow power of nature. Stone had yielded to trees. Vines had broken through bricks, their roots clinging to every nook and crack. Life was pulling apart the dead stone and brick of the city. 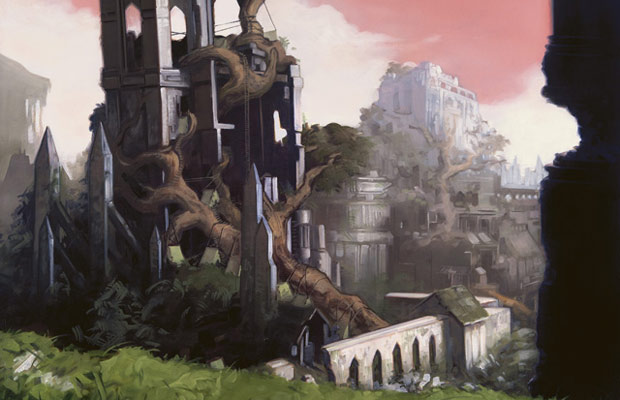 "Closeness to death brings many things to the Gruul: clarity of purpose; freedom from clinging; seeing the futility of rules; and, most of all, a renewed sense of life. Vigor and aliveness are never more powerful than when a warrior faces mortality. That is where the Golgari and the Gruul part ways. They have dived into death, allowing it to rob them of aliveness, while we have used nature's cycle to fuel us to feel more passion for life. Today, you will experience this firsthand."

"Your head will never be able to prepare you for what your heart understands fully. My words are for your mind. Life is for your heart. Do not listen too closely to my words or you'll become an Azorius. You must feel your way."

As dusk approached, the overgrown ruins began to cast eerie shadows. Domri had never in his youthful wanderings ventured this far out into the Utvara. Nothing seemed familiar. They approached a wall of vines and snarled roots that seemed impenetrable, but Sabast walked through the thick swath of them into the mouth of a hidden cave. Sabast pulled a torch from the wall, muttered a spell to ignite it, and walked down a craggy path decorated with Gruul symbols and pictograms.

After a long slippery trek down tunnels, across underground streams, and around stalagmites, they eventually reached a hole in the dark earth surrounded by Gruul grave items.

Sabast drove the torch into the ground with a shower of sparks and stood before the grave. He looked like a spirit from the afterworld as his eyes looked at Domri in the torchlight.