Dried skrill slime was fine enough, but there came a time when a real goblin needed grub meat to satisfy him, and Skrikkle was at that point.

Spit on this. He slung his dried slime at Groggle and tromped out of the warren in a huff. He could hear Groggle and his warren-mates scrabbling and fighting for the castaway skrill-scraps as he stormed off.

Skrikkle's eyes squinted as he came out into the sunshine. Grubs were bloody hard to come by and Skrikkle would have to venture far out into the danger-danger land to get them, but he didn't care two rot slugs about it. He was eating grub meat tonight or there was going to be trouble. Big trouble.

Skrikkle grabbed his digging stick and his leather cap and put on his grub-hunting boots. He was going out solo.

Other goblins knew to stay out of his way as Skrikkle stormed out into the rocks and rubble of their mountain hidey-hole. They had seen Skrikkle in this kind of mood before and didn't want to face his wrath, or that digging stick of his—the one with the maulhorn tooth tied on it—the stick that was the stuff of legend. 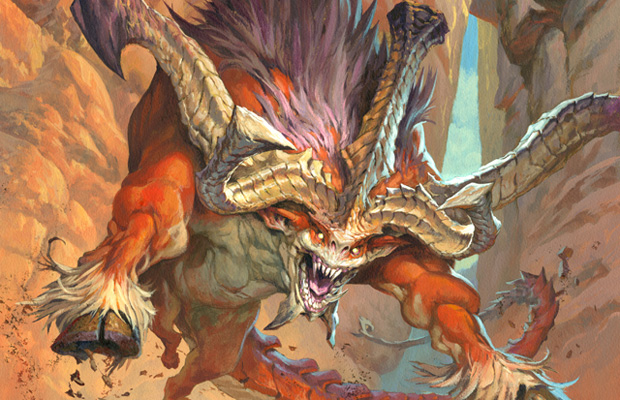 It just so happened that Skrikkle's great-grandpap Snurkle had come back from the danger-danger land one night, covered in blood. Clutched in his arms was an enormous, razor-sharp tooth that gleamed in the moonlight. Snurkle muttered something about pulling it from a maulhorn's jaw before Snurkle fell into a deep sleepy-sleep, but not the kind of sleepy-sleep that goblins don't wake up from. No deadlands for Old Snurkle. Not then.

Of course, plots and covetousness buzzed about the warren about the amazing tooth and its rumored powers, but Snurkle was the toughest of tough goblins and even in a deep sleepy-sleep his reputation was one to be feared. When he awoke, the gob-clan wondered what he was going to do with the tooth. Some said it had magical properties that could cure itchy places. Some said it could shoot fire and cook a brindle boar in a flash. Others said it was a god of the old gobs and must be worshipped with grits and petal bugs.

"This tooth's fer grubbin'," he growled.

A gasp went through the warren as Snurkle took the tooth and tied it to his own great-grandpap's hickory stick, gave it two taps, nodded with stern approval at his work, and set off at a brisk pace to the danger-danger land.

So when Skrikkle set out, he knew darn well that the fires of Snurkle the Grub Hunter burned in his veins. No goblin had hunted grubs since that time.

No goblin had dared.

Wurms defended their grubs violently and could smell a goblin from a good distance, whether they were above or below ground. A grub hunter had to know the signs, listen for the sounds, and smell the signals. But there were other prizes to be had out in the danger-danger land. There would be nothing that Skrikkle would want more than to get himself a tusker tusk. 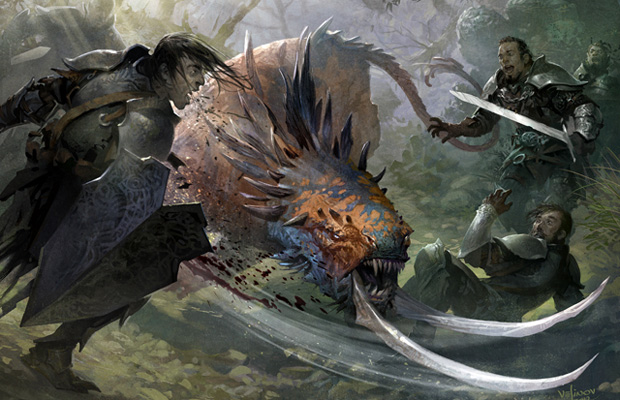 Skrikkle walked over boulders and through small canyons. He was going to dig up a grub—by gob—haul it back to the warren, be welcomed with adulation, eat like a king, tell some tales, drink some fizz-fizz. Then he would shove his maulhorn-toothed digging stick into Grooble's guts. And then he would go have a nice sleepy-sleep, and be done with it.

It was a long trek, and Skrikkle used every sense his goblin brain had at its disposal. Goblins usually travelled in gangs because a lone goblin out in the danger-danger land was an easy snack, and Skrikkle knew it. He wasn't a pushover by a long shot. Skrikkle had wiry tough hide, sharp teeth, and a keen sniffer, but he knew that if getting skrill slime was dangerous work, hauling in a good-sized grub by himself was going to be a tall order. He'd have to watch it.

But Skrikkle's walnut brain was filled with terrible thoughts. He felt the smooth wooden shaft of the digging stick under his thick fingers. He felt he was destined to rule. The weight of the maulhorn tooth gave him a certain sense of authority. He had the stick that no other goblin could even dream of. Sure, Grooble had his knife that was the envy of every goblin, including Skrikkle, but it did not have the impressive impact or ancestral value that Skrikkle's stick had. This stick was power and it made Skrikkle somehow... better... than all the other goblins. Maybe it was given to him by the old gobs.

A small smirk began to creep across Skrikkle's face.

He liked the feeling of being better than everyone else.

Skrikkle's mind began to work feverishly as he invented and created a world to support his new-found identity. He would be king. No more skrill slime. He would hurl hundreds of his unwashed brethren at the grub fields to bring back their succulent meat to his table. He would make the rules and say the loud words that would send his lessers scurrying to their whelping mats like sniveling drip weevils.

It would be glorious.

Skrikkle would be king and even the danger-danger land would tremble at the sight of him and his ancestral digging stick of power—power that he alone would wield. His hand tightened around the stick. No one would ever get this stick from him and, if they tried, they'd get a gutful of tooth on a stick.

Skrikkle leveled his stick with the gleaming maulhorn tooth at a wall of boulders, one of which was now a grinning imaginary Grooble.

Skrikkle dodged a knife thrust from a clumsy and inferior imaginary Grooble.

"Ha! Foolish stink-bag!" Skrikkle twirled about and swung his stick, knocking the knife from imaginary-Grooble's hand. "Now you see, Grooble, why you are not fit to lead. Nor are you fit to live!" Skrikkle screamed and lunged in with his stick and was impressed with not only his masterful stick-work but his devastating wit. He really stuck it to imaginary Grooble and it felt good. Really good.

So good that he didn't notice the rumbling sensation from the earth, nor the massive, foot-shaped object that now cast a shadow over him and imaginary-Grooble's pathetic corpse.

There was a thunderous impact, and with it faded the echoes and vain hopes born of madness. 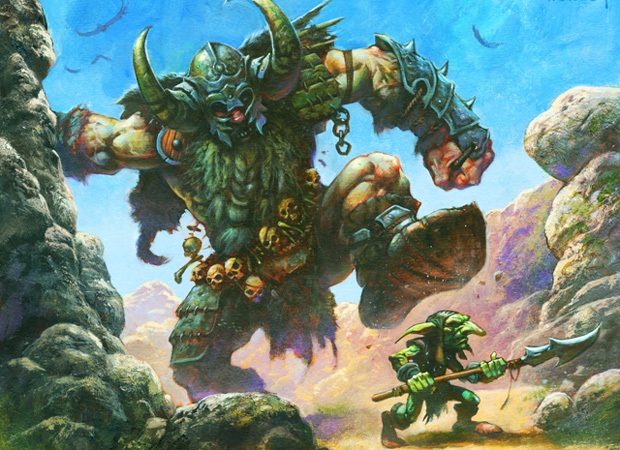