Coming this June 22, we're releasing something of a unique product that we're quite proud of. It's a showcase of talented Chinese artists, designers, and creators, all coming together to create a pair of Planeswalker Decks for the growing number of Magic fans in the Chinese-speaking world.

Global Series: Jiang Yanggu & Mu Yanling features two new characters who are and will continue to be part of the Magic world at large, but are getting their own little spotlight this time around. Let's meet the two cards that will be headlining these Planeswalker Decks. 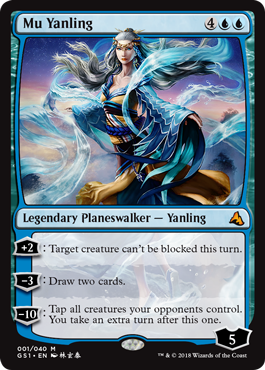 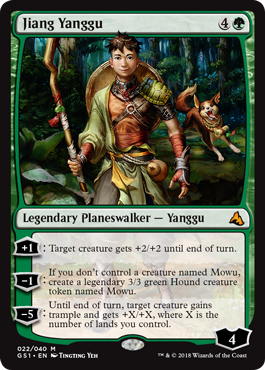 These decks are designed to be introductory products, much like normal Planeswalker Decks. The power level, structure, and goals are largely the same as the Planeswalker Decks you could pick up with Dominaria or the upcoming ones from Core Set 2019. What makes these a little different is that they were created specifically to imbue Magic with Chinese mythology and culture, and also as on-ramps for players in the Chinese-speaking world.

As such, we're trying something a little different with this product. While the cards in it are not designed for serious tournament play, we wanted to make sure the fans it was created for—new, Chinese-speaking fans—could still play with the cards at an Friday Night Magic when they're starting out. So, with this in mind, Global Series: Jiang Yanggu & Mu Yanling will only be Standard legal in China. It will not be Standard legal anywhere else. Like every other product we release, the cards will be legal for Legacy and Vintage use. They will not be legal in Modern.

The reason we released the product in English as well as Chinese is that we know Magic fans love unique products and cards, so we wanted to make sure collectors and fans of unique themes or cards had a chance to pick up the set as well. The English versions of these Planeswalker Decks were created for those fans. New players in other languages still have plenty of other on-ramps to the game, including the regular Planeswalker Decks, Welcome Decks, and more.

We know the regional legality is a little strange, but we thought it was the best path for this product and for helping new, Chinese-speaking players. The decks are fun and have a rich cultural identity behind them that make them truly unique.

Fans in China will be able to order the Chinese (Simplified) versions of the series online. Look for more information on how coming in June. Fans around the rest of the world can pick up English versions at local stores starting June 22.