The next chapter of Ixalan is beginning.

Rivals of Ixalan picks up where Ixalan left off. The four tribes are all becoming more and more entangled, converging on the same place. The very location our heroes have been drawn to. The legendary golden city of Orazca.

There's only one question left: Will you be the one who ascends and receives the city's blessing?

I'll leave the story question up to the fine folks over in Magic creative. But if you need to answer the question of whether people will be ascending in Rivals of Ixalan Constructed and Limited, the answer is a resounding yes.

By now, you've probably seen an ascend card or two. So let's take a look at a new one, shall we? 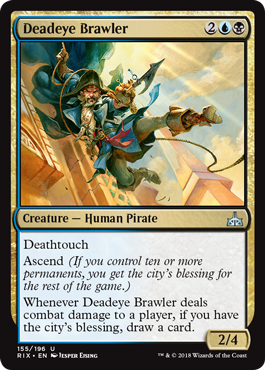 This card is a Limited powerhouse.

Four mana for a 2/4 with deathtouch is already enough to catch my eye. But also a "saboteur" (dealing damage to an opponent) to draw a card? Yeah, sign me up!

But what I want to focus on here is that middle bit: the ascend part.

Your goal with ascend is to hit ten permanents. As soon as you do so and either have an ascend card on the battlefield or resolve an ascend spell, you earn the city's blessing. The blessing can never go away once you have it—and having it enhances every card with the mechanic!

So, as you might imagine, hitting the ascend threshold is quite a big deal. What does this mean for gameplay? Read on!

In any given game of Rivals of Ixalan Limited, you should be thinking about whether ascending is going to be better for you or for your opponent.

While both players can absolutely ascend, often it's going to be better for one player than another—and if you can identify who that is, you can make plays that take advantage of it.

If you're the player looking to ascend, generally you want to be more conservative. You don't want to risk creatures in combat, and letting the game draw on is going to favor you. In fact, you should try and keep most remotely playable hands since that seventh card matters even more than normal!

On the flip side, if you're not looking to ascend and you think your opponent is, then you should be looking to trade and using your removal a little more aggressively than normal.

You may notice these two things are often going to be in stark opposition.

Often the attacker can get away with a bit more in the realm of bluffing and offering trades. Whereas normally my opponent would leap at the chance to trade their 2/2 creature in combat with my 3/2, for example, if their deck strongly wants to ascend they may just take the damage.

To do this assessment properly, look at what your opponent is doing and how they're playing. If they have an ascend card on the battlefield, clearly they want to ascend. But if they decline an early trade, that could also mean they're looking to ascend!

You should also look at what you have.

It starts all the way back in deck construction. How many ascend cards are in your deck?

If you want to ascend, cards like Deadeye Brawler are great to put in your deck since they're naturally defensive—and then can start taking control of the game once you've hit ten permanents.

And speaking of deck building . . .

Building Up to Ascend

If you are looking to ascend, that means building your deck a little differently.

You want permanents and ways to get permanents. For example, mana rocks become a little more attractive than normal for control decks trying to do this. Tokens are an excellent way to try and hit the city's blessing, since it's an easy way to jump ahead two or three permanents with a single card.

But one simple way to help with this is just to play a little more land than normal.

Now, longtime readers will know that I'm a big advocate of playing an extra land in your deck. And with ascend, that's definitely the case!

Why? Well, you really want to play a land each turn until you have ten permanents so you can ascend quickly; each land drop you miss is another permanent you have to make up. Additionally, as I mentioned earlier, you want to avoid mulliganning if you're looking to ascend. That extra card is one fewer permanent you have access to. And playing an extra land or even two helps you mulligan even less often.

If only there were some card that bridged the two . . .

Deadeye Brawler is an awesome Limited card. Now it's time to see what a slam-dunk Constructed-worthy ascend card looks like.

Here's a card you can expect to see plenty of: 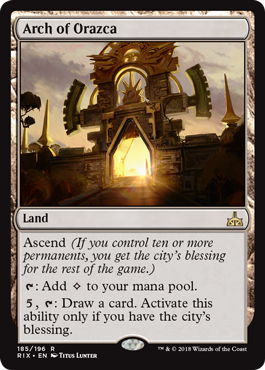 The literal bare-bones threshold to slide into your deck: a land. And it doesn't even enter the battlefield tapped!

Arch of Orazca just sits around innocuously, telling you to play a long game.

And then once you're there, Arch ensures you win it.

Drawing two cards per turn is a way for a control deck to easily close out any game. And if you're playing a control mirror, you really want this uncounterable, hard-to-remove permanent to be active for you—and definitely not for your opponent. You could say having it active makes you the . . . Arch-enemy.

The Blessing to Continue

Rivals of Ixalan has plenty to shake up Standard, from supercharging tribal decks to giving you a whole new reason to play a slow game.

And while you're playing with Rivals of Ixalan, much in the way that you may ask yourself who's the beatdown, always be asking: Who is close to ascending?

Have any questions at all? Want to send over some thoughts? I'd love to hear from you! You can always message me on Twitter, ask me a question on Tumblr, or email me at BeyondBasicsMagic@Gmail.com.

Have fun—and may you hit ten permanents with ease!