rresters descended upon the scene only moments after the deed was done. A crowd was already gathering, pressing in on a gangly man who stood over a lifeless body. Blood welled from the body, the flow following the seams between the paving stones before it pooled around the man's fine boots. The man made no effort to move, to run. He remained there, hunched and disheveled, but frantically alert. His eyes darted this way and that across the faces of the swelling crowd, and the point of his sword followed his shifting gaze in a series of jerky movements. 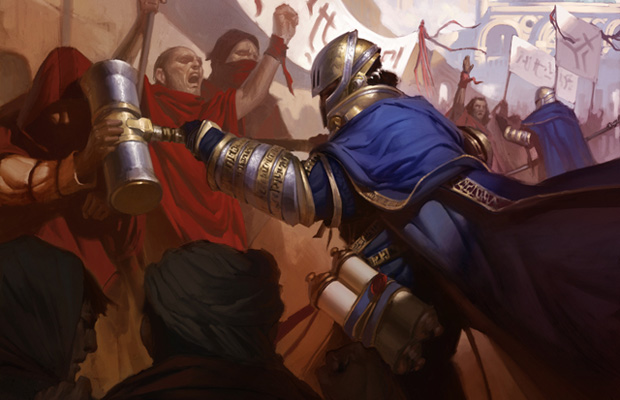 The arresters pressed through the crowd, and their calls for order rose above the shouts of horror and anger. An arrester may have been reading something, but the man was oblivious in his survey of the onlookers. Then his jaw erupted in pain. The sword flew from his hand. He collapsed upon the body, desperately holding his hands out to ward off a second blow.

"Symond Halm, I told you to drop your weapon and submit to detention in accordance with detention law number one, one, four."

Symond opened his eyes at the voice and a sour-faced, all-business arrester stood over him, a stun-baton in his mailed fist. Symond suddenly recognized the taste of blood in his mouth, but he simply stared at the arrester and smiled.

A second arrester yanked him to his feet, and Symond found himself being ushered away under the guard of a half dozen arresters. Other Azorius officers swarmed over the site. Gawkers lined the street to see him marched off to the Detention Compound. Amid the motion of the crowd, a single, motionless figure caught his attention. The detainee turned his head. Atop a horse sat a man draped in a cloak that hid a suit of gold-filigreed plate armor. The rider's face was obscured behind a helm, but the cyclopean visor was unmistakably Orzhov. Symond's gaze was fixed on the horseman until they turned the corner. He heard the word "debtor" echo after him, although he could not be certain. 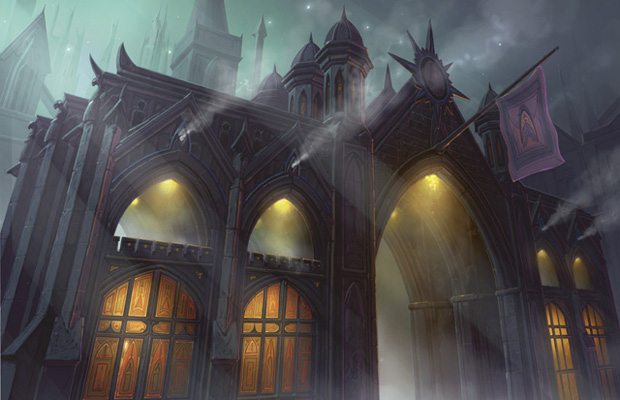 "A thousand thanks for agreeing to see me, most generous Ilona," I said, removing my hat as I bowed theatrically. The Orzhov potentate raised an eyebrow. I bowed lower, not wanting to offend a woman of such high status. Still no verbal response, and I became acutely self-aware. I stood, clutching my hat to my chest, feeling suddenly clumsy.

Ilona sat upon a luxuriously cushioned, high-backed chair at the summit of a dais that was raised a dozen steps from the floor. She was framed by one of the many enormous arches that rose up behind her, and I knew that I was out of place here. A slight upward curl emerged at the corner of the kingpin's mouth. She folded her hands in her lap and looked at me for moment in a way that reminded me of a cat. "Your plays amuse me, Symond."

"You are most kind," I said, regaining my composure. "I could think of no finer compliment than the knowledge that my words please you."

Ilona's smile grew wider. She stood up, and descended the stairs, stopping on the final step from which she looked down at me. "Come now. What can I do for you?" 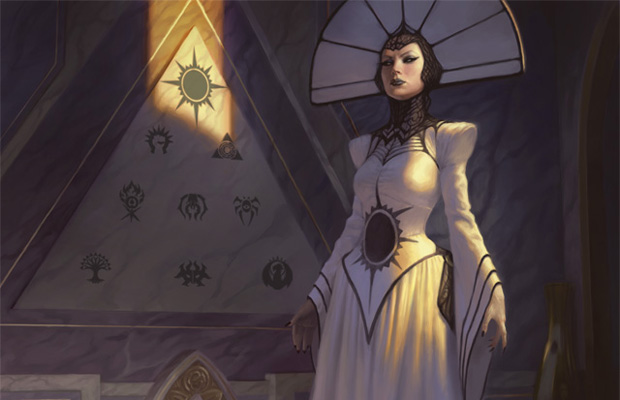 "I have come to you, Ilona, the most sincere patron of the arts," I said, as I put my hat on with a flourish, "because I want to put on a play. You see, I've written a play about the epic tale of Zandra, the child who led the Legion.

"A moving tale of courage and redemption."

"Oh, but this is my masterpiece."

"They lacked the vision. If you could find in your heart to—"

"You need coin. I understand." She turned and called up to her empty chair, "Lord Kazmyr!" A small, gray figure, adorned with a gold mask and matching gold chains, emerged from behind the chair. Lord Kazmyr was Ilona's thrull. The name she chose for her bound thrull revealed the Orzhov kingpin's flair for the theatrical; an attribute I interpreted as most promising at the time. 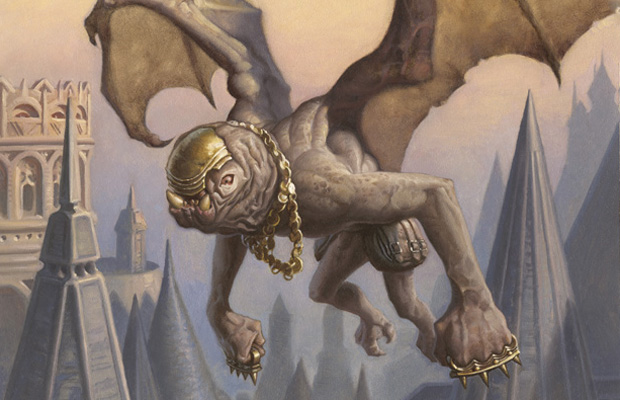 "Bring a contract," Ilona commanded. "This man, Symond Halm, wishes to borrow money." Lord Kazmyr unfurled a pair of leathery wings and flew off. "Your previous three plays were critical and financial successes." I nodded, basking for a moment in her acknowledgement.

The thrull returned a few moments later with a roll of parchment, a quill, and a vial of ink. I took the quill. "You have been most gracious, Ilona," I said.

"This is an investment. You are incurring a debt. To me." She held out the vial of ink. "I intend to collect, and servitude will not count as currency this time." I dipped the quill, and signed.

Lord Kazmyr saw me out, and as the door closed behind me, I heard the thrull whisper, "Bilagru will come for you."

The cell door slammed shut, and the sound of a lock clicking into place resonated through the stone chamber. It was a small cell with thick walls. Three circular windows were cut into the outer wall in a vertical pattern, each with a grid of interwoven iron preempting any plans for escape. Beyond the grates, segments of Ravnica's endless skyline could be made out. Symond tested the strength of the iron. It did not give. He turned to his cell door and tested its bars as well. Solid and strong. He strained against the bars to peer down the corridor, which was lined on both sides with cells presumably like his. And guards. Armed guards.

Symond sat down in a corner of his cell, his eyes fixed on the distorted grid-pattern shadow that stretched across the floor as light poured in through the lowest window. It was close to sunset. He was safe.

My play demanded realism. The soldiers wore functional combat-tested armor. All the costumes, I insisted, were authentic to the period. 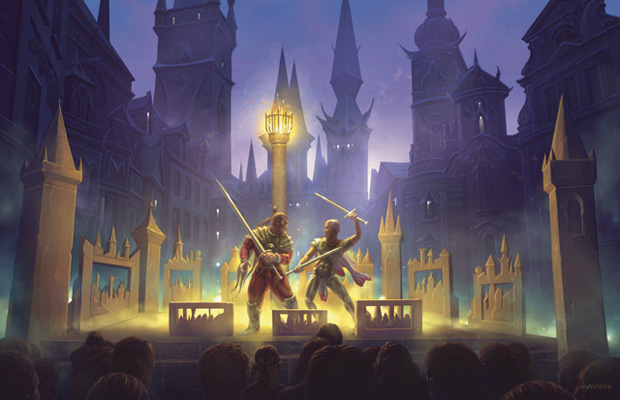 And then there was the stage. Two Izzet mages designed and build a stage where, for the final scene, the floor would fall away, leaving only the bridge where Zandra would duel the Demon of the Spire.

It was my vision.

The curtains drew back on opening night, and Zandra took the stage with her legionnaires.

I peered out to the audience from backstage for a moment, hoping to spot Ilona. To my horror, she was all too easy to spot. Only a quarter of the seats were occupied, but there, sitting in her balcony seat, was Ilona.

I became suddenly aware of how expensive every detail was, and how, ultimately, I was accountable. I was in debt.

I had to get out of there. It appeared that audiences just wanted a comedy.

I scrambled to stuff a bag with food and clothes and hung a sword from my belt. Quietly, I opened the door that led to the street, and stepped out.

The darkness that permeated the cell was thick. When Symond woke, he blindly felt around with outstretched arms, probing the darkness for anything, or anyone, that may be lurking. He crawled around the cramped space of his quarters on his hands and knees. "Ilona would be amused by this." A short, shrill laugh escaped his mouth.

The cell began to take shape as his eyes adjusted, confirming that he was, in fact, alone. Of course he was. Symond stood. With renewed confidence, he took the three-and-a-half-step journey across his new domain. His final footfall, however, was punctuated by a harsh scraping sound. Symond leapt back. Then he bent down and picked up a coin. Although he could not see it, he felt the embossed disc and symmetrical rays of the Orzhov guild sun.

A flickering glow distracted Symond for a moment. The light was coming from the round windows. Slowly, he approached them, crouching to peer through the lowest window. He saw a shifting dark shape, silhouetted against the glow. The shape turned. Lord Kazmyr was staring back at him. Then the thrull spoke. "Bilagru will come for you."

Symond was paralyzed with fear.

Commotion beyond the bars of his cell broke his paralysis. He whirled around. Guards were yelling out orders. The bright blue crackle of Azorius spells flashed, illuminating a panicked scene for only moments at a time. More guards rushed passed Symond's cell. The other prisoners added their shouts to the clamor.

There were shrieks, and the unrelenting, unforgiving, "Bilagru will come for you."

I ran, and kept running. My lungs burned. My head pounded. But I pushed forward, ducking down the alleyways and side streets that were so familiar to me. 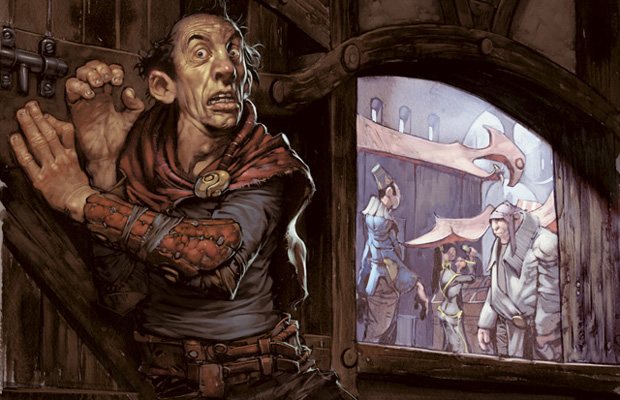 I just needed to get away. Far away. I had to go to a place where Bilagru couldn't find me. Or Ilona. All the Orzhov, for that matter.

I rounded a corner at full sprint, and before I could change course, I crashed into a courier. Both of us tumbled to the ground as scroll cases scattered across the street. Scrambling to my feet, I was about to run when I noticed that the person was a vedalken. Normally, this would not have caught my attention. However, when I looked around, I recognized the area. This was the Azorius Tenth District. In a sudden bloom of inspiration I saw my escape. I knew the safest place—the place farthest from the reach of any Orzhov hand—and how to get there.

The vedalken was still sitting in the street, dazed. I reached down to help him up, and when he rose, I drew my sword and plunged it into his chest. He tried to yell out, but his voice failed and he slumped, lifeless, against me. I let his body drop back to street, and I waited for the arresters to take me away.

There was nothing to hide behind, so Symond pressed himself against the far wall of his cell, his closed eyes his only defense. All was quiet. Heavy steps grew louder with each footfall. Then those stopped. A key slid into place and turned. The lock released. Symond opened his eyes to see the door swing open. Bilagru, blood-spattered and armored, filled the doorway. His double-bladed axe was slick with gore. The giant stooped to look into the cell. When his eyes found Symond, he saw the cowering man slump to floor.

"Symond Halm," he said as he stepped inside. "You are a debtor to Ilona of the Orzhov." 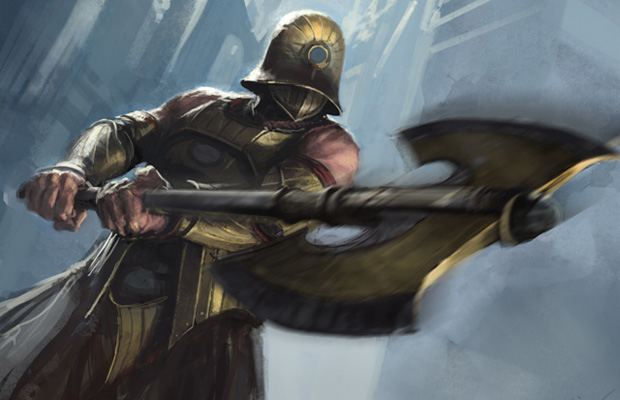 He raised his axe. "Debts must be paid."