Which do you choose?

Variants on this game have existed for thousands of years, dating back to ancient Chinese dynasties. If I can't interest you in boring old rock-paper-scissors, can I interest you instead in slug-snake-frog? Or how about fox-hunter-chieftain?

The variations go on. But the core premise is simple and always the same: A beats B, B beats C, and C beats A. If you and an opponent both choose one simultaneously, either you'll have a tie or one of you will win.

And it's a hard choice. Because really, playing against a random opponent for the first time, you have no information to go on in rock-paper-scissors. Yes, you can say things like people are more likely to choose rock because it's the strongest-sounding one, or that a new player is most likely to choose scissors because it's the last one they heard, but for the most part, it's a mystery.

Rock-paper-scissors can become a little more interesting the more games you play against someone. But, while a clever way to choose something at (more or less) random, it's not the kind of game most people sit there and play for hours.

Fortunately, Magic's version of this is a bit more interesting.

Sometimes, a metagame boils down to three primary decks. Each deck strong in its own right, they tend to line up in a very similar pattern. One deck will, most of the time, beat another. You have to choose which to play. 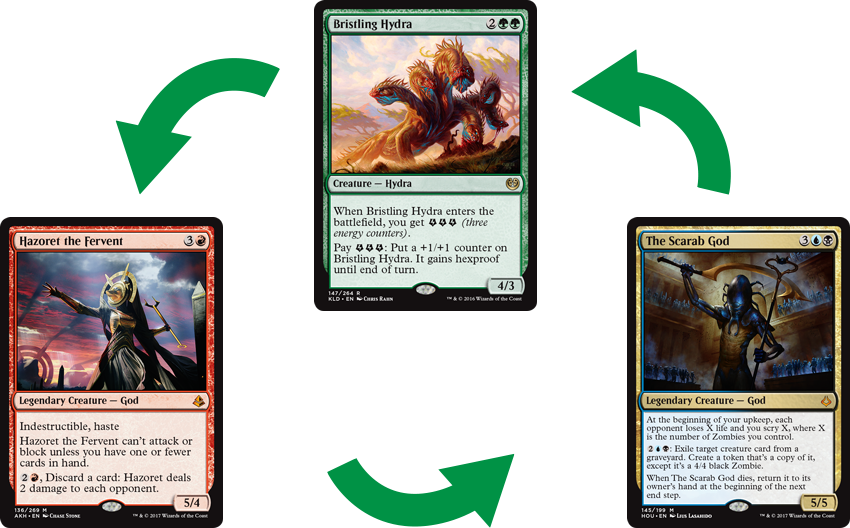 Advantaged doesn't mean it's a sure thing. Unlike pure rock-paper-scissors, sometimes rock pulls one over on paper and busts straight through that papery cage.

We saw this in the Top 4 of Worlds, for example. Huey Jensen, despite piloting Temur Energy right into the clutches of Blue-Black Control, still took it down. And, admittedly, the Temur Energy deck is advantaged against red, though it isn't a blowout by any stretch of the imagination. But still, they are advantages to overcome, nonetheless.

There are a few things you can do to try and shift this all around in your favor. If the metagame holds true (which it may not—I am writing this several weeks in advance), I'd expect to see some of these tactics on display at the Pro Tour this weekend.

Regardless, Pro Tour or not, if you plan on playing competitively you will almost assuredly encounter this at some point, and knowing how to act can be crucial to success.

Let's talk about it today.

Perhaps the quickest thing you can think of when cornered into a metagame situation like this is simple: break the cycle.

And it makes a lot of sense. If all three decks are gunning for each other, and if you can find something that doesn't fall prey to the same kind of hate cards, then you can take advantage of all the infighting.

Sometimes, for example, the three decks in this circle will start spending all of their sideboard cards or modifying their main decks to fight each other. That leaves them prime targets for something just under the radar that they are ill-prepared for, which can come and break through!

This can work, and definitely has in the past at large events to solid effect. I'm a huge proponent of innovation, so you certainly don't need to sell me on trying. However, it absolutely does have some risks.

First and foremost: a lot of the time you end up innovating a deck that is just weaker than the other three. Yes, it's different—but being different isn't necessarily an advantage unless it's in a way that's strong against the decks at the top of the metagame. If it's just a weaker version of the existing decks, then, well, what are you really accomplishing?

But let's say that you do end up with something that, say, beats two of the top three decks consistently. (Which is about the barometer I'd be looking for to consider it here.) Well, there's another problem—that's not all there is.

Building a new deck is my favorite avenue to consider, and the most exciting one to go down, but the one that I find has to be managed with the greatest care. It can totally work, you just have to be really sure of what you're doing. If you can get it to work, though, you may end up one of the best-positioned people in the tournament. The effort to try and make this happen really is worth it.

Okay, so you've hopped on board one of the main three. Perhaps the original deck didn't pan out, or maybe you were just attracted to one of these decks. There's nothing wrong with either of those decisions. So now, what's your plan to take down the others in this circle?

What I want to learn right away is how close the matchups are, how much effort it can take to swing any of them in my favor, and the details of how to play them. Am I really unfavored in a matchup, or just slightly unfavored?

I also want to try and see how much of this can just be solved with matchup familiarity. Sometimes, knowing how to tackle a matchup can be what you need.

In a famous example, Carlos Romão won all the Psychatog mirror matchups in the 2002 World Championship by letting his opponents' card drawing resolve. Instead of fighting over them with counterspells, as was the convention at the time, he saved his exclusively for the spells that really mattered—like Psychatog.

Learn the matchups well enough that you know what you need, then it's time to make changes.

One of the main tools you have is your sideboard. (Or even changing your main deck to include cards previously in your sideboard!)

However, doing this can be very dangerous.

Let's stretch that to its logical game theory extent and say that everybody does this. Okay. Well, suddenly you don't have anything for the deck you are supposed to be advantaged against . . . and they have several cards against you! Maybe this matchup starts slipping through your fingers. And you really don't want to lose that one.

From the other side of things, how much are you actually increasing your chances of victory in the matchup you're weak against?

This is where all that playtesting and research you did comes in!

The place I tend to really like spending a couple extra sideboard or main-deck card slots in these kinds of situations is for the mirror match.

That's not to say you shouldn't still have cards for the other matchups, or try to pull your hard matchup back in your favor. Just that a few mirror-match cards tend to provide some of the highest return.

But, most of all here: you're going to rely on what you discovered by playing games with the deck to figure out what levers you have to pull to give yourself the best chance.

What's the best approach to take in Standard right now?

Well, I'd love to see something fresh and new break out at Pro Tour Ixalan this weekend! I'll be watching as the world's best put their heads together to crack into Standard. And you'll no doubt see several of the tactics mentioned here on display.

But regardless of what happens there, hopefully the next time you end up working in a format like this, you'll find yourself better armed to deal with it. It's a tricky situation—and a place where practice and tactical deck changes can make a huge impact.

Have any thoughts on this article at all? Please, let me know! I'd love to hear from you. You can always reach me by sending me a tweet, asking me a question on Tumblr, or emailing me (in English, please!) at BeyondBasicsMagic@gmail.com.

I'll talk with you again next week. Enjoy the Pro Tour!